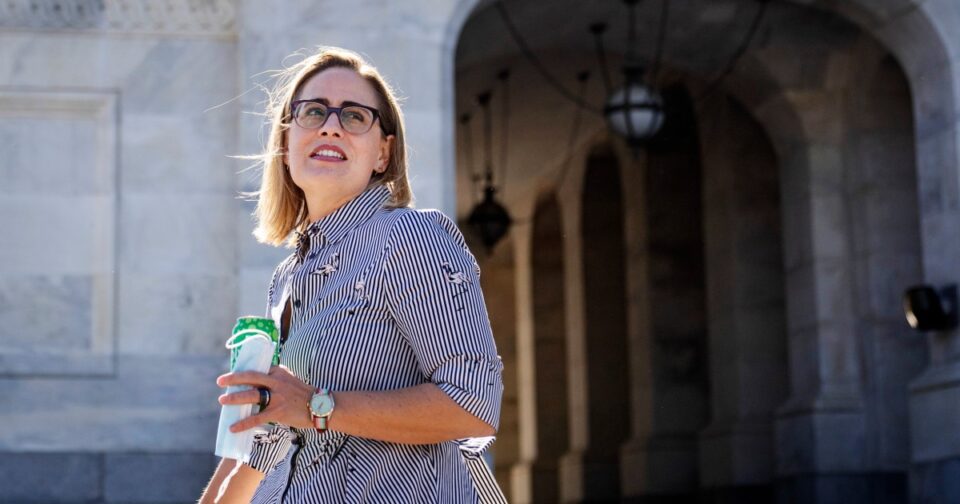 The Arizona Democratic Party executive board voted Saturday to censure Sen. Kyrsten Sinema, a rare rebuke from her own party that could complicate her political future.

“While we take no pleasure in this announcement, the ADP Executive Board has decided to formally censure Senator Sinema as a result of her failure to do whatever it takes to ensure the health of our democracy,” Arizona Democratic Party Chair Raquel Terán said in a statement.

Two sources in the meeting told NBC News the censure passed by a unanimous vote.

The executive board meeting of the state party came three days after the first-term senator voted with Republicans to block a rule change aimed at passing major voting rights legislation. In a 48-52 vote, the Senate was unable to pass a motion by Democrats to change the rules and impose a “talking filibuster. Sen. Joe Manchin, D-W.Va., joined Sinema in voting with Republicans to protect the 60-vote rule.

“The state party has no confidence in Sinema,” Arizona Democratic Party vice chair Michael Slugocki told NBC News, adding that “a lot of people have been frustrated for a long time and this filibuster vote was the final straw.”

It’s “unlikely, if not entirely impossible” that the state party would endorse her for reelection in 2024, he said.

“A lot of Democrats worked their butts off to elect her in 2018,” Slugocki said. “Activists across the state feel betrayed by her after they knocked on doors in 100-degree weather in Aug. 2018 … only to see her go against everything we thought we were electing her to do.”

In response to the censure vote, Hannah Hurley, a spokesperson for Sinema, said, “Kyrsten has always promised Arizonans she would be an independent voice for the state — not for either political party. She’s delivered for Arizonans and has always been honest about where she stands.”

In a statement Wednesday night, Sinema said she supported the two bills but feared that weakening the 60-vote threshold would further divide the country.

“I also maintained my longstanding opposition to separate actions that would deepen our divisions and risk repeated radical reversals in federal policy, cementing uncertainty and further eroding confidence in our government,” she said. “Tonight’s votes must not be the end of our work to protect our democracy.”

Sinema has rankled numerous members of the Arizona Democratic Party since her ascension in Congress. In 2018, she declined to endorse the state’s Democratic candidate for governor against Republican Doug Ducey. Sinema has also been notably absent at official state party events, compared to her tenure in the Arizona Legislature.

In the Saturday statement, Terán praised Sinema’s “leadership” in passing the American Rescue Plan and bipartisan infrastructure law, but added that the “ramifications of failing to pass federal legislation that protects their right to vote are too large and far-reaching.”

Terán said the party is “a diverse coalition with plenty of room for policy disagreements, however on the matter of the filibuster and the urgency to protect voting rights, we have been crystal clear. In the choice between an archaic legislative norm and protecting Arizonans’ right to vote, we choose the latter, and we always will.”

Vaughn Hillyard is a political reporter for NBC News.