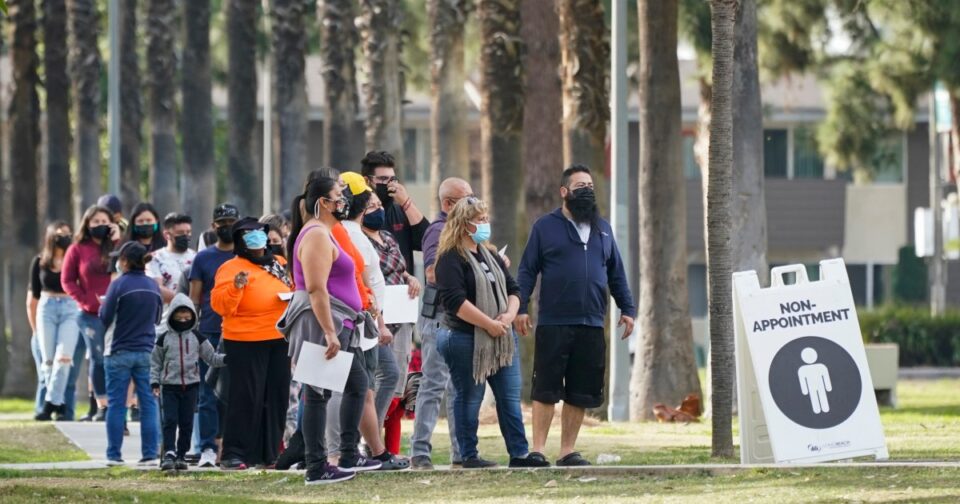 “Nationally, the case numbers are coming down, which I consider an optimistic trend,” Dr. Rochelle Walensky, director of the Centers for Disease Control and Prevention, said at a White House Covid briefing Friday.

Full coverage of the Covid-19 pandemic

But the falling numbers don’t mean Americans are out of the woods.

That’s because, as cases fall, a huge number of people will still be infected: As many people who got sick as cases soared to their peak will get infected on the downward slope, said Dr. Jonathan Li, an infectious disease physician at Brigham and Women’s Hospital in Boston.

“It’s a great sign that the slope is going down but case rates remain very high,” he said.

According to Katriona Shea, a professor of biology at Pennsylvania State University and a  member of the coordination team for the Covid-19 Scenario Modeling Hub, a group of institutions that pool multiple models to create pandemic projections, cases and hospitalizations are expected to peak before the end of January in most states.

Shea said that cases in the rest of the country and deaths, which lag behind cases, are expected to trail shortly after.

It wouldn’t be surprising if we saw a few more bumps in the road.

The big dropoff in cases in large states like New York can make the nationwide average look lower, even though cases are still rising in many states, but she expects all states to hit their peaks soon after Northeastern states.

Even so, people should not see this as a time to ease up on precautions, she said.

“People think that if the peak is at the end of January, then we’re done. But a lot of damage can be done on the other side of that peak,” Shea said.

The omicron variant now accounts for nearly 100 percent of new Covid cases in the nation, CDC data show. Although early evidence suggests this strain of the virus is less likely to cause severe disease than its predecessors, many more people are being infected than ever before, so the number of people dying will still be significant, she said.

“It wouldn’t be surprising if we saw a few more bumps in the road, temporary bounce backs that don’t get back at the level of the peaks we’re seeing now, but are still brief periods of increase on this general trend of a decline,” said Justin Lessler, a professor of epidemiology at the University of North Carolina Gillings School of Public Health in Chapel Hill.

These brief spikes will likely be driven by lags in reporting and behavior changes, such as traveling more over holiday weekends, he said.

The latest Covid-19 Scenario Modeling Hub predictions, published Thursday, projected that by April, cases could drop to the lows seen in June 2021, before the delta wave hit.

What the models cannot predict, however, is how the virus may evolve.

“All it takes is one new variant,” Shea said. “There was no indication of omicron and there were other variants that did not take off. Omicron made a huge change and it’s definitely possible it could happen again.”

Kaitlin Sullivan is a contributor for NBCNews.com who has worked with NBC News Investigations. She reports on health, science and the environment and is a graduate of the Craig Newmark Graduate School of Journalism at City University of New York.