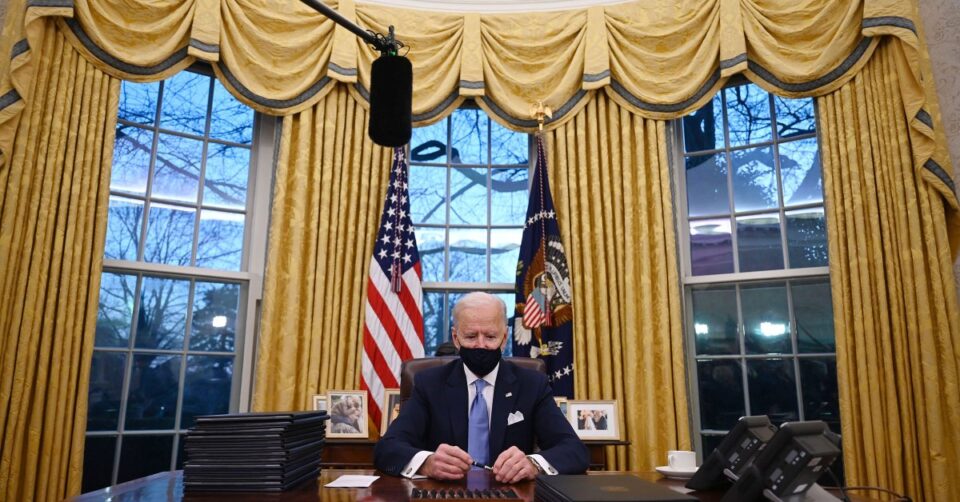 Now that we’re a year into Joe Biden’s presidency, much of Official Washington is issuing its report cards. In summary: Biden had better hope the coming years are kinder. That said, it’s easy to forget the totally unprecedented time between 2020’s Election Day and Biden’s high-security Inauguration—and all of the ways that chaos laid bare the fragility of the American system.

A new report from Boston Consulting and the nonpartisan the Partnership for Public Service’s Center for Presidential Transition, released today, summarizes just how much such transitions rely on the unofficial but sacrosanct commitment to a peaceful transition and how lawmakers could safeguard against a repeat of the messy 78 days in which then-President Donald Trump and his administration spent much of the time building roadblocks for Biden.

The post-voting rallies, the denial of Trump’s loss, Biden having to demand the keys to buildings and offices he needed to get into, Trump refusing to this day to concede or meet with Biden—none of it was anywhere close to normal. And that’s on top of the now-ex-President’s attempt to have Congress set aside the certified votes and give him four more years. Trump spun-up a violent mob and urged them to march on the Capitol and then found himself on trial as only the second President in history to be impeached.

There are no obvious ways to force outgoing Presidents to acknowledge the facts. But there are ways to compel an outgoing team’s cooperation with the incoming one, so that they can get started on Jan. 20. Nothing about a presidential transition is sexy, but the process does lay the foundation for the administration that follows.

Since 1963, Washington has had an official guidebook for transitions of power. It appears that the cost of John F. Kennedy’s post-election ascension—$300,000, or about $2.6 million in today’s dollars—made an impression. That Presidential Transition Act has, of course, been updated over the years to reflect changes in what incoming teams need, including an incumbent President who can take advantage of planning teams across town to handle anticipated turnover should he be re-elected. These days, Congress sets aside a little less than $10 million; Biden backfilled the balance of $24 million from private donors to cover roughly 10 months of salaries, office space and research for a transition team that reached 1,500 people at its peak.

Some go smoothly, as was the case when George W. Bush made clear that his outgoing raft would treat the incoming team of Barack Obama far better than they met eight years earlier when White House staff stripped the letter W from keyboards after the messy Bush v. Gore case made its way to the Supreme Court. (On Day One of 43’s term, there was no phone book for the Bush West Wing and staffers were wandering around looking for each other. Government oversight aides later put the price of punked keyboards at $5,000.)

The Sept. 11, 2001, terrorist attacks prompted a 2004 update to the Presidential Transition Act to allow the candidates to pre-vet aides who would need security clearances to hire staff. The Sept. 11 Commission even specified that the slow pace of confirmations had to change. When the first plane smashed into the World Trade Center eight months into Bush’s presidency, only about 30% of his national security appointees were working.

While John McCain mocked then-rival Barack Obama in 2008 of measuring the drapes before Election Day, the Democrats’ scrupulous preparation helped Obama transition into power in the immediate wake of Wall Street’s meltdown. McCain was nominally working on his own transition but didn’t take it nearly as seriously as Obama, who availed himself of federal workspace in downtown D.C.—away from campaign headquarters in Chicago—to build out what would become his team.

Obama’s 2012 rival, Mitt Romney, also famously took transition planning incredibly seriously. The Romney Readiness Project—shorthanded to R2P—was ready with names for almost every one of the political positions scattered throughout the government. Tevi Troy, a veteran of the Bush Administration and two presidential transitions, has a fascinating behind-the-scenes history of Romney’s never-seen-but-excellent effort here, and it’s worth the read. (Ironically, the executive director of R2P later became Trump’s deputy chief of staff tasked with managing the transition to Biden. His boss—the President—didn’t make it easy on the newcomers. “To walk away when the very most important time was coming up—and then at a time where obviously tensions had gone through the roof—I just didn’t feel like that was my duty,” Chris Liddell told the transition scholars for the report.)

For his part, Trump did not take his own transition planning seriously and basically dumped the transition work led by Gov. Chris Christie into a bonfire. (Only losers have to prepare, one person involved in Trump World observed.) Trump instead treated the weeks of transition as a “shambolic” reality show, forcing contenders for Cabinet posts to show up for a red carpet at his Bedminster, N.J., golf club or in Manhattan for dinners to be embarrassed. (Ask Romney whether the frog legs, lamb chops and chocolate cake were worth the headache of the trip to Jean-Georges in Trump International Hotel in New York to audition for Secretary of State.)

Biden, who had seen firsthand the rush of building a government as the Vice President to Obama, took the preparations far more seriously. At its height, Biden’s transition preparations had 450 people vetting potential hires, including about three dozen tasked exclusively with scouring social-media accounts for red flags. His transition team set the ambitious goal of getting 2,800 of the non-Senate-confirmed positions in place within the first 100 days; they got 1,500, according to the report from the Partnership for Public Public Services.

That’s partly because Trump signaled as early as May that he wasn’t willing to go politely, basically sabotaging the required transition planning process that should have been a signal of the standoff over resources that would come. More than $6 million was held-up while Trump pressured his own administration to ignore the results from November of 2020. (This, of course, pales compared to the resistance in sharing COVID-19 information, secure diplomatic lines to return foreign leaders’ calls and even a complete intelligence briefing for the President-elect documented in the new report.)

In the end, Biden ended up having access to the government resources—phones, background checks, travel budgets and office space required by law—for a little less than two months in total before starting his new job. And, even then, cooperation from the incumbent officials was contingent on whether that person had fealty to Trump and his fanciful claims that he had won re-election.

The new report has a slate of useful suggestions on how to improve the transition process so this doesn’t happen again. For instance, its authors suggest, reducing the number of appointees that require Senate confirmation to fill federal posts and streamlining the process to boost government efficiency could go a long way. A plussed-up FBI budget in election years could help speed up background checks for potential hires. The same is true for the National Archives, Office of Presidential Personnel and Office of Personnel Management who are buried in years easily divisible by four. And, while Congress is at it, expanding security clearances for those working on the transition could spot red flags that are obvious to those in the know. (See: Flynn, Michael.)

As a Congress apparently unable to push much of an agenda across the finish line, technical fixes for the next transition might be the rare spot where D.C. can agree that the nuts and bolts of government actually matter, mainly because both parties stand to gain government money for it. Still, it is lost on no one that there is the very real prospect of Trump returning to Washington in a reverse do-over his botched transition. It has both parties’ leaders watching with maxed-out anxiety.