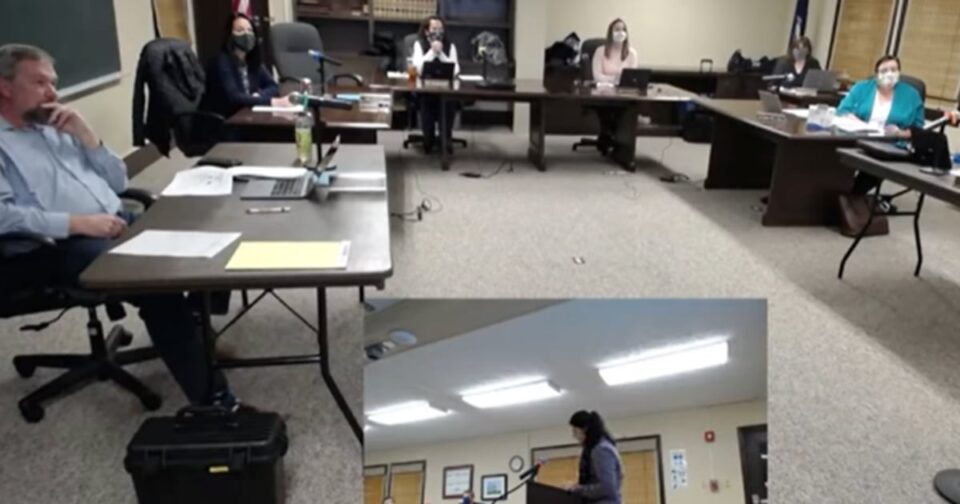 A Virginia woman was arrested Friday after she appeared to threaten school board officials while they met to vote on whether to lift a mask requirement.

The woman, Amelia King, 42, was accused of making an oral threat on school property after she was cut off during a public comment section of the Page County public school board meeting Thursday, the Luray Police Department said in a statement.

“Alright. No mask mandates,” King told board members after her three minute comment period ended. “My children will not come to school on Monday with a mask on. That’s not happening and I will bring every single gun loaded and ready.”

When a board member again cut King off, noting that three minutes is a policy, she said: “I’ll see y’all on Monday.”

King, who was released on $5,000 bond, did not respond to a message left Friday on a phone number listed under her name. But later in Thursday’s meeting she emailed an apology to a board member saying that she was “only speaking figuratively.”

“I in no way meant to imply ‘all guns loaded’ as in actual firearms, but rather all resources I can muster to make sure that my children get to attend school without masks,” the email said, according to a school board who read the note aloud. “My sincere apologies for my poor choice in words.”

Bo Cook, chief of the Luray Police Department, said King contacted law enforcement to apologize as well. But her comments “absolutely caused public alarm,” he said, adding that other local authorities were also investigating the incident.

In a joint statement Friday, the school district superintendent and board chair said King’s comments “go against everything we wish to model for our students” and “they go against the very nature of how we as a community should interact with each other.”

“This kind of behavior is not tolerated from our students, faculty, staff, nor will it be tolerated by parents or guests of our school division,” the statement added.

Youngkin, a newly elected Republican, signed the executive order on his first day in office saying that the decision to wear a mask is a “matter of personal liberty; parents should make that decision for their children.”