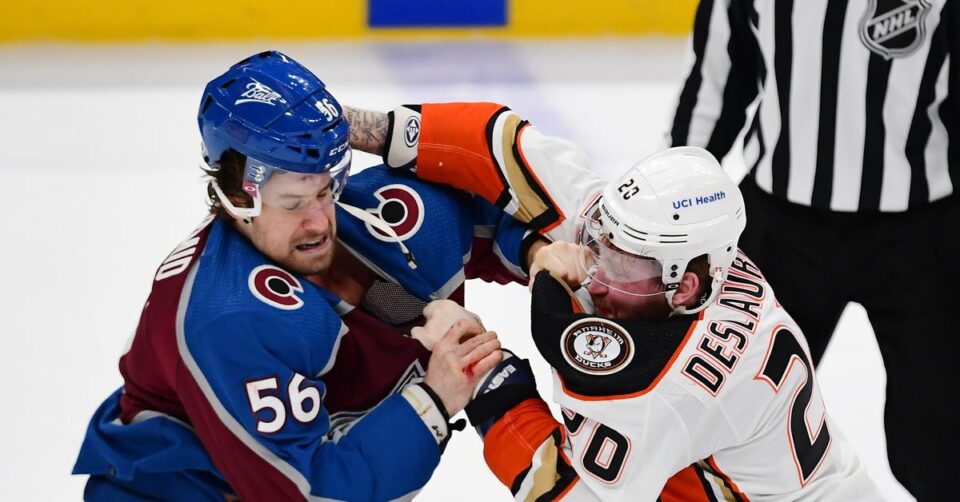 We’ve covered hockey fights before, and the results have not been great. And today we’ll be talking hockey again for obvious reasons, but need to make my positions on this clear from the outset: I respect the athletes, I applaud the fans and their enjoyment of the sport, and I maintain my position that allowing players to fight during the game is dumb as hell.

“But Victor, why do you hate fun?“ Well, I don’t. I love fun! This is just restrained fun with a puritanical facade, a uniquely American phenomenon of craving and encouraging violence but not having the conviction to say it outright. Carving out a niche to have players fight when it doesn’t add to the scoreboard is a bozo move, but if what people like, it’s what they like.

But look, you want me to say nice things about a hockey fight? Show me a genuinely good and entertaining one. Don’t worry, I’ll wait.

Now that I’ve beat that over your head with a healthy dollop of condescension, we’ll cut to the matter at hand. The Colorado Avalanche played the Anaheim Ducks earlier this week and a fight broke out between two gentlemen that I’ll assume are Canadian as hell due to their names. Kurtis MacDermid and Nicolas Deslauriers decided in the first period of the game that they didn’t like their hands and opted to demolish their appendages on the helmet of their opponent.

MacDermid starts to shuffle his arm, which got me excited! I thought he was going to set up his Road Dogg combo, but realized with dread that he may have in fact damaged his hand. The commentary team helpfully explains that this may have in fact been a problem with his elbow pad, which appears to be correct. That’s not a good thing, that just makes this fight suck even more. I could watch Dambé if I wanted to see one-handed punching, at least that’s the explicit reason for being there in the first place.

But the announce team was eating this up, and some media have been covering this like it was Takayama/Frye. While it seems like low standards for me, I’m sure the fans at home and in attendance all had fun with it. And good for them.

The fight went on for an uncomfortably long period of time, then the refs halfheartedly stepped in and they separated as the crowds roared with delight. Both parties ended up benched and everyone remembered that they were there to participate and witness an actual, honest-to-god sporting event, so the game went on. Don’t ask me who won or what the score was, I neither know nor will ever be bothered to investigate that much.

Fun times for all, I’m sure. Good luck with all that.