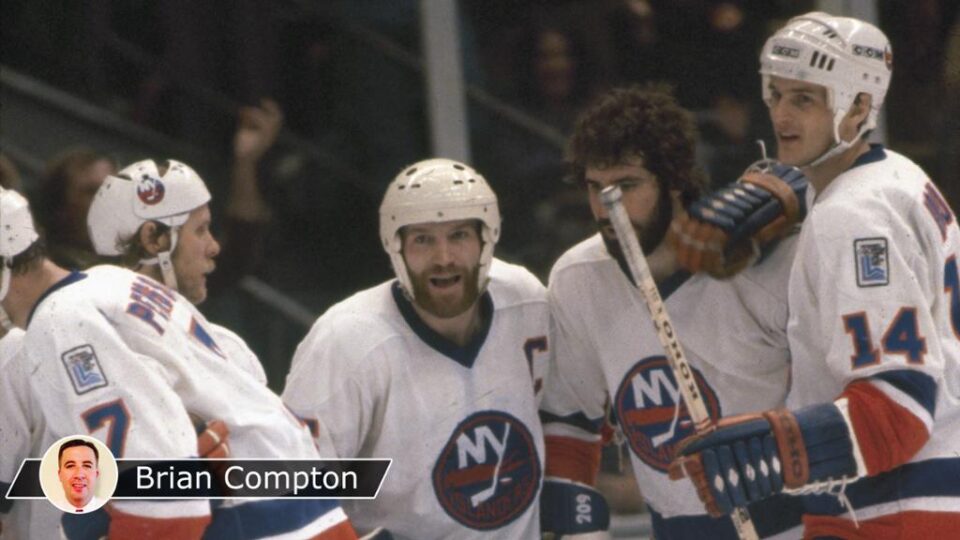 A Canadian boy from Moose Jaw, Saskatchewan, moves to New York as a 20-year-old and goes on to have a Hall of Fame career in the NHL, mostly with the New York Islanders, playing a pivotal role in one of the greatest dynasties in any sport with four consecutive Stanley Cup championships from 1980-83.

All the while, a friendship with his Islanders teammate, Bob Bourne, soon blossoms into a brotherhood. Each gets married, has a family. They live next door to each other on Long Island for a decade.

Roughly 20 years later, Gillies’ daughter, Brianna, and Bourne’s son, Justin, reunite at Bourne’s induction into the Islanders Hall of Fame. They start dating, fall in love, get married and have two children.

“We were over the moon,” Bourne said. “[I entered the Islanders’ Hall of Fame] in 2005, and Justin was playing hockey in Alaska at the time and going to school there too in Anchorage, and Brianna was going to school. Those two came together and it was just like … they hadn’t seen each other in a few years. When those two kids got together, it was just like, there was lightning rods going between the two of them. It was huge.

“‘Clarkie’ and I knew [the wedding] was coming for about a year, so we got to prepare ourselves, but it was so special. I mean, my goodness, we probably lived beside each other for probably eight or nine years in those days. Brianna was like a little girl to me. Clark had three girls and I had two boys, and I always felt like I had five kids. They were either over our house all the time or my boys were over at his house. We just looked at each other and just shook our heads like, ‘Oh my God, we’ve got this instant family.’ I can’t tell you how special it was. It was so special.”

Gillies died Friday at the age of 67. He and Bourne were two of 17 players who won the Cup four times in a row with the Islanders and helped set the NHL record of 19 straight playoff series wins.

They first met when they played baseball against each other at 15 years old. Each signed with the Houston Astros and played together in the minor leagues. The Islanders selected Gillies with the No. 4 pick in the 1974 NHL Draft; Bourne went in the third round (No. 38) to the Kansas City Scouts but was traded to New York a few months later.

“We were together all the time,” Bourne said. “We were very, very close even before we started playing junior hockey. There were three players who I look back on my life that would change the culture of the New York Islanders. One was Bobby Nystrom, one was Gary Howatt and one was Clark Gillies.

“When we broke in in ’74, the Flyers had won the Cup a couple of times and [Dave Schultz] and all those guys were running rampant in Philly. Clark, I think he was 20 at the time, and we had just watched those teams on TV the year before. He came in and he fought Dave Schultz right in front of the Flyers bench and just beat the [bleep] out of him. It changed the culture of our team.”

The Islanders’ dynasty began when they defeated the Flyers in the 1980 Stanley Cup Final. That playoff run included a best-of-7 quarterfinal series against the Boston Bruins, which New York won in five games. Gillies scored in overtime in Game 1, Bourne the same in Game 2. Each goal was scored less than 90 seconds in. Each scored five points in the series.

“I think my favorite memory was flying home to New York from Boston that night, and we couldn’t be happier,” Bourne said. “Here’s two Saskatchewan boys sitting there together, and we both scored overtime goals.”

There were surely plenty of laughs on that flight, as there were on countless trips during their time together as teammates.

“The funniest man I’ve ever known,” Bourne said. “I’m not kidding, it’s 53 years now, but I could hear a joke 50 years ago and he could tell me the same joke today, and I’d laugh just as hard. That’s the true measure of a comedian.”

Perhaps we’ll get to see Gillies and Bourne on the ice together again in some fashion down the road, through their 5-year-old grandson, Charlie. His arrival topped any trophy they won together.

“Oh my God, we were just over the moon,” Bourne said.

And then his voice trailed. Tears soon followed.