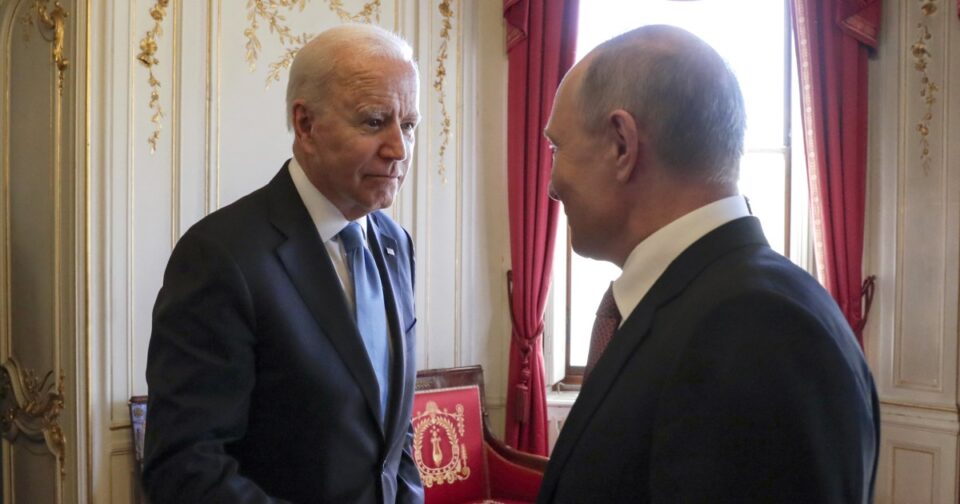 Russian President Vladimir Putin won a major victory this past week, and it didn’t require him to move a single soldier or weapon into Ukraine. During a news conference at the White House Wednesday, President Joe Biden made several considerable concessions. These rhetorical retreats would not only damage and further destabilize the government in Kyiv. They also reverberated in capitals across eastern and central Europe, leaving leaders there feeling even more vulnerable to Moscow’s meddling.

What should Biden have said? He needed to channel Winston Churchill: Describe in stark terms the gravity of our present predicament.

In diplomacy, the messaging really matters. Having served in numerous embassies overseas, I’ve seen how the right message can help secure peace. But the wrong message can lead to conflict. What Biden said about a potential Russian invasion and NATO’s response falls squarely into the latter category. His words will embolden Putin to be even more aggressive and accelerate his asymmetric attacks on other neighboring nations.

The president recklessly remarked that the price for Russia invading Ukraine “depends on what it does. It’s one thing if it’s a minor incursion and then we end up having a fight about what to do and not do” — the “we” apparently referring to NATO.

This clumsy, cringe-worthy attempt to distinguish between minor and major invasions sent a clear signal to the Kremlin that if troops stopped short of a full-scale military operation, they might avoid a serious response from the West. This is an ideal outcome for Russia. In fact, it is its preferred path forward.

Let’s step back and consider Putin’s goals. He wants to keep Ukraine and other former Soviet republics off balance and well away from NATO’s sphere of influence, which officially starts next door with member states like Poland and Hungary. It’s also important for him to continue distracting Washington and its allies. By slowly, steadily expanding encroachments across the border with Ukraine, Russia can achieve maximum instability and constant crises Americans will need to address. In the meantime, we will be less focused on places like Belarus, Kazakhstan and Venezuela.

Ultimately, NATO’s power lies in its message. Article 5 says that an attack on any member will result in the response of all members. For decades those words kept the Soviets and now the Russians at bay. But if that message of unity frays, its power wanes.

The U.S. commitment to its NATO allies was already called into question during the Trump administration, when the former president publicly suggested he might not feel obligated to defend another nation in need. So the message was already quite diluted.

But Biden deflated the common defense balloon even further by choosing to publicly air the organization’s internal debates. He indicated that NATO members would be divided on how they should respond in the event of a Russian incursion. This served up on a silver platter a major opportunity for Putin’s propagandists to drive a further wedge between the alliance. Why on earth would Biden make it that easy?

In both cases, the American president said only what many had already speculated. But saying the silent part out loud is serious stuff in diplomacy. It’s been clear for months now that Washington would prefer not to get entangled in a significant spat with Moscow. During their summit in Geneva this summer, Biden essentially told Putin, and later the news media, that as long as he doesn’t meddle as much, we can live with it.

This is unfortunately part of a broader, more detached approach to foreign crises that the White House has taken. The Kremlin took it as a major moment to move ahead with an ambitious attempt to assert more control over its neighbors.

What should Biden have said? He needed to channel Winston Churchill: Describe in stark terms the gravity of our present predicament. The sovereignty of a nation’s borders is a fundamental principle of international law, and threats to breach them demands more than piling on a few more sanctions, which is the diplomatic equivalent of a slap on the wrist.

Biden should have looked past the reporters in the room and straight into the camera, speaking directly to Putin. The Russian leader needed to hear in no uncertain terms that we will use absolutely every asset and technique at our disposal to push his forces out of Ukraine. These include military, intelligence, economic, communications and diplomatic tools. Should he move in, we will massively increase military support to Ukraine, as well as other Russian neighbors. While we may not at this time be willing to put our troops into combat against Russia, the United States can ensure that the result of an invasion would be Putin’s nightmare: a well-fortified eastern front.

The West also needs to hit Putin where it hurts. As his aggressive repression of Alexei Navalny and other dissident voices shows, he is most concerned about eroding support among the Russian public. Biden should have announced that if Moscow chooses to carry out a military invasion of Ukraine, we would launch an information invasion of Russia — the kind of messaging that can harm our adversaries rather than ourselves.

Every week, the U.S. could release new intelligence about corruption and mismanagement at the Kremlin. Every week, we could increase distribution of Russian language materials on democracy, human rights and the rule of law. Every week, we could flood the internet with satiric content that punctures Putin’s propaganda.

A strong message won us the Cold War. Our projection of a society with hope and opportunity contrasted starkly with the control and cruelty of communism. It can help us overcome today’s threat, too. Biden and his team need to stop talking on Russia’s terms. We need to develop much clearer, more compelling language of our own. To date, Russia has been fairly successful in defining this debate around the question of NATO’s expansion. In reality, the focus should be about Moscow’s moves into and meddling in other countries.

Biden needs a Berlin Wall moment. He should now travel to Ukraine and deliver a Reaganeseque speech in Kyiv about freedom versus fear. It must include stronger steps that the United States and our allies will take — to both prevent future invasions and to pressure Moscow’s proxies to release their control on territory. That would go a long way toward repairing some of the damage done by Biden’s poorly chosen words this week.

Brett Bruen was the director of global engagement in the Obama White House and a career American diplomat. He currently runs crisis communications agency the Global Situation Room and teaches crisis management at Georgetown.