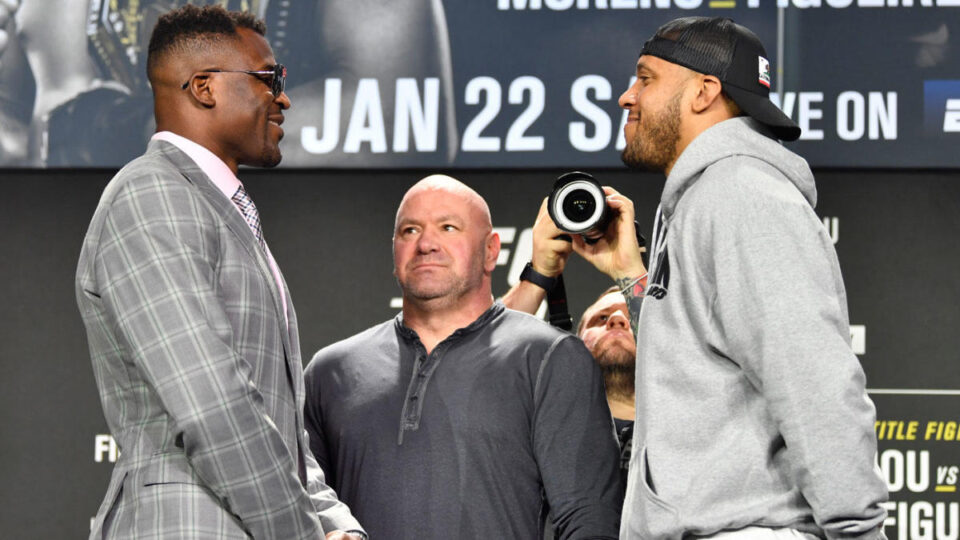 The first PPV event of 2022 is upon us as UFC returns to California with a pair of titles up for grabs. UFC 270 goes down from the Honda Center in Anaheim, California, on Saturday night and features title bouts in the heaviest and lightest divisions within the promotion. Heavyweight champion Francis Ngannou looks to turn away interim titleholder Ciryl Gane in the main event atop the marquee.

Ngannou and his war of words with UFC president Dana White have gotten all the attention in the buildup to this bout. The native of Camerron is hoping to receive an increase in his salary after fighting out his contract on Saturday night, but UFC is apparently unwilling to budge.

Plus, the underlying theme in this massive matchup is Gane is trained by Ngannou’s former coach in Fernand Lopez, and the two trained and sparred together for a brief time. Both have differing opinions of how those sessions went, but it won’t matter once the cage door is closed on Saturday night in California.

Can’t get enough boxing and MMA? Get the latest in the world of combat sports from two of the best in the business. Subscribe to Morning Kombat with Luke Thomas and Brian Campbell for the best analysis and in-depth news, including a complete preview of UFC 270 below.

UFC 270 picks, predictionsNgannou (c) vs. Gane (ic)NgannouGaneGaneNgannouNgannouMoreno (c) vs. FigueiredoMorenoMorenoMorenoMorenoFigueiredoPereira vs. FialhoPereiraPereira
Pereira
Pereira
PereiraNurmagomedov vs. StamannStamannNurmagomedovStamannNurmagomedovNurmagomedovMorales vs. GilesGilesGilesGilesGilesGilesRecords to date (2022)0-00-00-00-00-0Campbell on why Ngannou will win: The reality for Saturday’s heavyweight title unification is that unbeaten Gane just might be everything we think he is (and more) and it still might not matter should Ngannou land even a single clean finishing strike. But add in the fact that Ngannou has seemingly used the long layoffs caused by his frustration with UFC matchmaking to sure up the larger holes in his game and there’s potential for this fight to even be one-way traffic for “The Predator.” It’s a big if, of course, given how uniquely skilled Gane is in potentially disarming his foe. It’s just hard to shake the memories of how effortlessly Ngannou secured the title from Stipe Miocic in their rematch while adding in elements of takedown defense, top position with heavy strikes and even an evolved kicking game. Ngannou is a level of scary the division has never seen before and he’ll have enough motivation given the ex-teammate storyline and his ongoing contract disputes with UFC brass to deliver his most profound statement yet.

Brookhouse on why Gane will win: I hate picking this fight as much as I love that this fight is happening. The question really comes down to if Ngannou can land a single one of his fight-ending bombs, something he seemingly always manages to pull off. That’s the danger of ever picking against Ngannou: you’re picking against him landing one clean shot. Gane is an experienced striker, however, with an elusive style that has befuddled opponent after opponent. It’s Gane’s discipline that is likely the difference-maker. He is not likely to recklessly run into a shot and if he can keep Ngannou from figuring out the timing of his entrances and exits, it’s going to be a long, tiring night for the champion. Gane has survived two other “one-shot killers” in Jairzinho Rozenstruik and Derrick Lewis, dominating both with ease. It’s going to be a white-knuckle ride, but expect Gane to slowly pick apart and wear down Ngannou before completely dominating the action starting around the third round.

Mahjouri on why Gane will win: Oddsmakers nailed it when opening this fight as a pick’em. Ngannou has supplemented his monstrous power with a thinking man’s game plan. Gane has heavyweight strength and serious accuracy to accommodate his brilliant fight IQ. The argument can be made that Gane and Ngannou are presently the best heavyweights alive. The impulse leans ever so slightly towards Gane. He reminds fans of a heavyweight Georges St-Pierre; from superficial elements like his French accent, shaven head and nice-guy attitude, to his well-roundness and sublime technical ability. Pick Gane, but do so hesitantly.

Campbell on why Moreno will win: Timing is everything in this sport and given the ease at which Moreno stopped Figueiredo in their rematch last year, there’s good reason to believe he can do the same in their trilogy. Not only is Moreno, Mexico’s first UFC champion, the hotter and fresher fighter at this moment in the matchup, the 34-year-old Figueiredo has long had a difficult weight cut to 125 pounds that isn’t getting any easier. Expect, as always, for Figueiredo to be a threat to score a stoppage for the duration of the opening round. But the longer this fight goes, the more potential there is for the iron-chinned Moreno to outlast his veteran opponent and deliver the finish. Figueiredo’s new relationship with Henry Cejudo and head coach Eric Albarracin could be something to watch out for stylistically as a threat to Moreno, but it feels clear which direction both fighters appear to be going at this point after nearly eight full rounds contested between them.

Brookhouse on why Moreno will win: There is a real risk that what we saw in the rematch between the two was a combination of one brilliant night from Moreno coming on the same night Figueiredo had a uniquely bad performance. Still, Moreno looked like a fighter who finally put everything together in that fight and Figueiredo looked lost against a fighter who had confidence to do any and everything that crossed his mind. It felt like a real changing of the guard. There’s also a bit of a desire to see Moreno win and move on to the next phase of his career, rather than being forced into a fourth fight with Figueiredo. This is likely a closer fight than the rematch, but one in which Moreno can take over as Figueiredo fades a bit as the rounds tick by.

Who wins Ngannou vs. Gane? And what other picks do you need to see for a parlay with a payout of better than 16-1? Visit SportsLine now to get detailed top picks on UFC 270, all from the insider who’s up more than $10,000 on MMA picks the past two years, and find out.