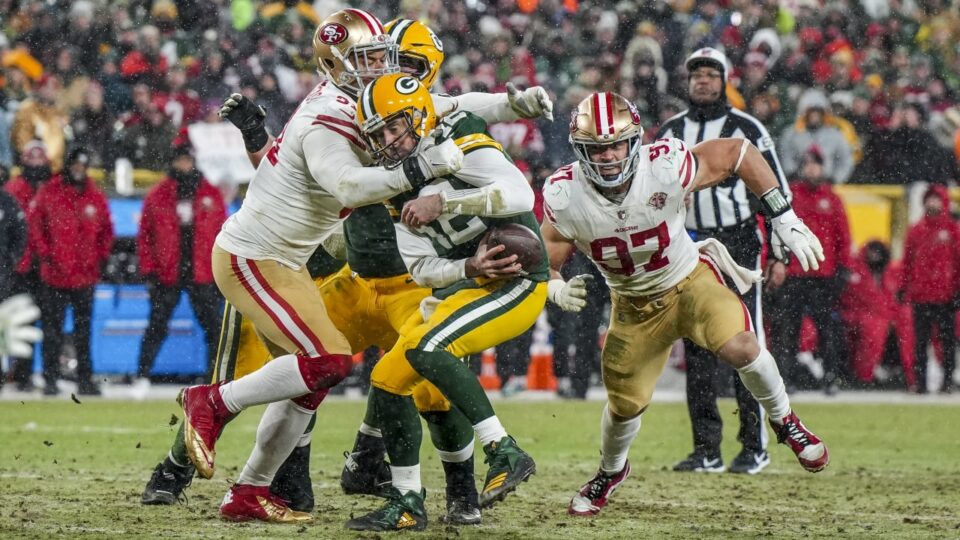 DeMeco Ryans had been a defensive coordinator for all of two games the first time he squared off against Aaron Rodgers and the Packers’ high-powered offense. It was a long night in September for the 49ers, as Green Bay jumped out to a big, early lead before Rodgers led a last-minute drive to win the Week 3 showdown.

For a moment Saturday, the host Packers appeared to pick up right where they left off in San Francisco. Rodgers dissected the Niners’ defense on an opening touchdown drive that didn’t even require a third-down conversion.

Green Bay would get the ball back nine more times but didn’t reach the end zone again in a shocking, 13-10 home defeat to San Francisco in the Divisional Round.

“DeMeco called some great calls, and we (were) disguising them pretty well and we confused him,” 49ers safety Jimmie Ward said of Rodgers, per Josh Shrock of NBC Sports.

Such a performance has rarely been seen from a Rodgers-led unit during his storied career. The Packers’ 10 points were the fewest in his 21 career playoff starts, with Rodgers failing to throw a touchdown for only the second time. His five sacks taken tied a postseason career high. It was an inexplicable showing from the presumptive MVP, who’d thrown at least two touchdowns in 14 of the past 15 games, and the Packers offense, which had scored at least 30 points in six of the past seven games.

Four months ago, Rodgers led six scoring drives in a 30-28 win against the Niners. Lessons were clearly learned by San Francisco’s 37-year-old DC, whose unit has allowed an average of 17.2 points over its last 11 games.

“He started trying harder and working harder. He just kept sticking with it, man,” coach Kyle Shanahan said of Ryans. “We have some good players. DeMeco is an unbelievable coach. The whole staff has stuck together. They never stopped working. Our guys never stopped grinding. It comes down to one game that could have gone either way so that’s why you always stay humble as a player, as a coach, everyone in this profession. DeMeco has been amazing all year, and so has our defense. You get better or worse. You never stay the same, and those guys have been getting better.”

That was true within a matter of possessions at snowy Lambeau Field. Rodgers completed a robust 68.9% of his throws, but was under constant duress while directing all but six of 27 attempts toward Davante Adams and Aaron Jones. The imbalanced distribution coupled with a stagnant run game produced just 263 total yards, 4.9 yards per play and a season-low 14 first downs.

The Niners’ two biggest defensive stands, of course, were catapulted by their special teams units, which blocked a field goal on the final play of the first half and blocked and returned a punt for a touchdown late in the fourth quarter to tie the game. Aside from a broken play that resulted in a 75-yard completion to Jones before halftime, the 49ers allowed 97 yards over 43 defensive snaps after the first drive.

It marked the third consecutive week they’d gone on the road and put the clamps on an opponent down the stretch of a win-or-go-home situation. Ward said the Niners have been working to cultivate a closer mentality since failing to hold off the Chiefs in Super Bowl LIV.

“Just finish,” Ward said. “We still getting haunted by the Super Bowl — 2019, the last six minutes and we lost the game. Coach Kyle put a big emphasis on finishing [this season].”