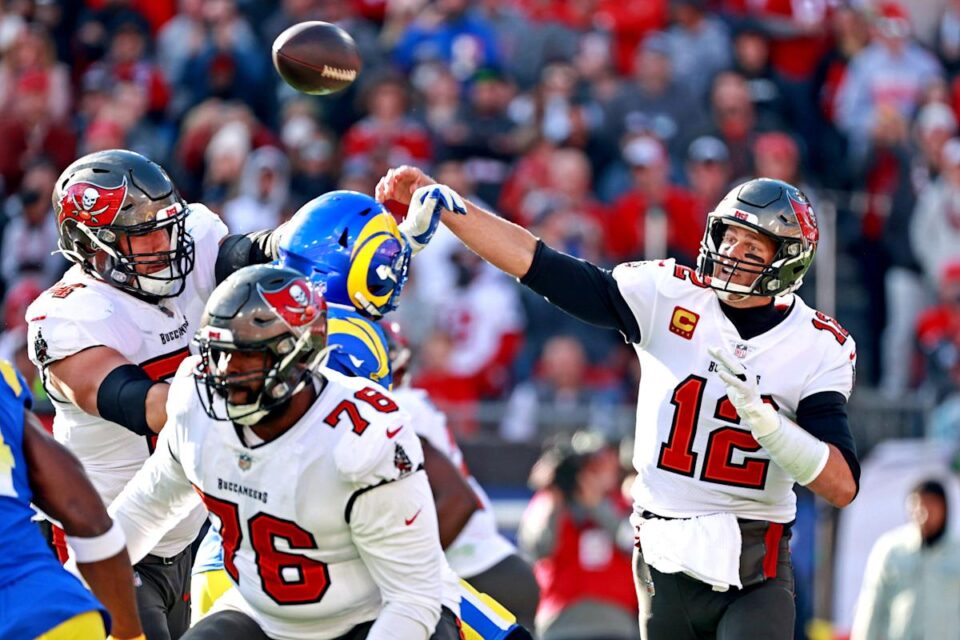 After 22 seasons in the NFL, Tampa Bay Buccaneers quarterback Tom Brady figured to be all out of firsts.

But in Sunday’s divisional playoff game against the Los Angeles Rams, Brady was penalized for unsportsmanlike conduct for the first time in his career. The incident came during the second quarter when Brady was hit by Rams linebacker Von Miller just as he released a pass.

Miller appeared to lead with his helmet and hit the seven-time Super Bowl champion in the middle of his chest. A furious Brady, with a bit of blood on his lip, began yelling at referee Shawn Hochuli.

But instead of a penalty on the Rams, Hochuli flagged Brady.

Buccaneers quarterback Tom Brady was under heavy pressure from the Rams defense throughout the first half of Sunday’s NFC divisional playoff game.

The NBC broadcast team of Al Michaels and Cris Collinsworth quickly noted that it was Brady’s first-ever unsportsmanlike conduct penalty — and that just last week he admitted in a SiriusXM interview with Jim Gray that officials “probably let me get away with a lot of unsportsmanlike conducts talking smack to the other teams and talking smack to the refs when I don’t think I get the right call.”

Said Hochuli via a pool report after the game: “He got in my face in an aggressive manner and used abusive language. As for the hit, we did not think that it rose to the level of roughing the passer.”

Brady and the Bucs had plenty more to complain about in the first half, falling behind the Rams 20-3 at the break and 27-3 early in the third quarter.

However, Brady worked his late-game magic once again, rallying Tampa Bay to tie the game 27-27 in the final minute — only to have the Rams drive down the field to win it on Matt Gay’s 30-yard field goal as time expired.

NHL On Tap: Panthers roll into Seattle to play Kraken