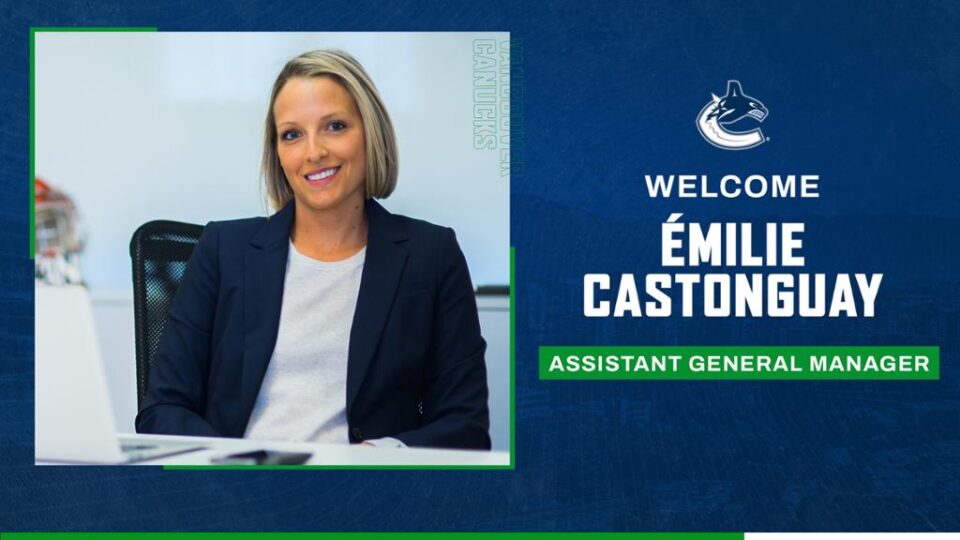 VANCOUVER — Emilie Castonguay found it difficult to walk away from her job as an agent to become the first woman assistant general manager of the Vancouver Canucks.

However, her history with the city made the decision easier.

Castonguay got emotional twice during her introductory press conference Monday. The first time was when talking about how hard it was to leave the players she represented at Momentum Hockey, where she became the first woman NHL Players’ Association certified agent in Canada in 2016. The second was while discussing her attachment to Vancouver.

“My sister tragically died 10 years ago, and during the last conversation we had, she told me that one day I was going to manage the Vancouver Canucks,” Castonguay said in French. “So when the Canucks called, it was pretty emotional for me. … I felt like the universe was trying to bring me here.”

Castonguay, whose sister Valerie passed away at the age of 25 due to a medical error while undergoing rhinoplasty in 2008, wrote Vancouver on a vision board five or six years ago.

“I had written a certain age and then written Vancouver beside it, just because I wanted to be in Vancouver at that point in my life,” said Castonguay, who will turn 38 on March 13. “I didn’t know how I was going to get there or how it was going to happen, but I turn that age in about a month and a half, so it’s always been kind of in the back of my mind and on my vision board, and whether it was as an agent, or working for the NHL, I didn’t know how I was going to be there, but it’s pretty awesome it worked out that way. So for me, Vancouver was a no-brainer.”

As an agent, Castonguay represented several NHL players, including New York Rangers forward Alexis Lafreniere, who was selected with the No. 1 pick in the 2020 NHL Draft, Montreal Canadiens forward Cedric Paquette, and Arizona Coyotes forward Antoine Roussel, who played three seasons for the Canucks from 2018 to 2021. She also represented players in the American Hockey League, junior hockey and internationally, including Marie-Philip Poulin, a three-time Olympic medalist (two gold, one silver) and current captain of the Canada women’s national team.

Castonguay is the second woman to be an assistant general manager in NHL history, joining Angela Gorgone, who held the position with the Mighty Ducks of Anaheim during the 1996-97 season.

“It’s a historic day, and it goes to show that women have a place in sports and in hockey,” Castonguay said. “I’ve always had such a good reception from everybody in the sport, and it’s important for women that want to be in the sport to know that. Sometimes you get intimidated, but you shouldn’t. If you have the knowledge and you’ve done the work, there’s a place for you here. If it needs to start with me, good, but for me, it’s just always been my experience.”

Castonguay’s hiring comes less than two months after Jim Rutherford was hired by the Canucks as president of hockey operations on Dec. 9. He is also acting general manager while leading the search for someone to fill the role left by Jim Benning, who was fired on Dec. 6.

In his first press conference, Rutherford had pledged to build a more diverse front office, but Castonguay, who said she’s always taken a “non-binary” approach to her career and never focused on gender, made it clear she wouldn’t have taken the job if it felt like the Canucks were simply trying to check a box for good public relations.

“The conversations that I’ve had with Vancouver, we never even talked about the fact that I was a woman,” she said. “I would have felt that from a mile away, I can tell you that much, and so I never had that feeling while I was talking to Vancouver, and I guess that’s part of the reason also why I made this move.”

Castonguay’s experience as an agent will be valuable for Vancouver after it fired assistant general manager Chris Gear, whose job included contract negotiations, on Dec. 10. But Castonguay and Rutherford envision a bigger role rebuilding team culture.

“Emilie has extensive experience, is driven to succeed, and has a strong reputation in hockey for her intelligence and work ethic,” Rutherford said. “She will play a lead role in player contracts and negotiation, managing the collective bargaining agreement, and her voice will be heard in all aspects of hockey operations. She will be a key member of our leadership team.”

Prior to becoming an agent, Castonguay, who was named one of the 25 most powerful women in hockey by Sportsnet in 2020, played four years of NCAA Division I hockey as a forward at Niagara University, where she graduated with a bachelor’s degree in finance in 2009 and won a National Scholar Athlete award.

Following an internship with the Montreal Canadiens, where she was mentored by then general manager Pierre Gauthier, she earned a law degree from the University of Montreal in 2012 and is a member of the Quebec Bar Association.

“I’ve always just been really well treated, whether it’s conversations with NHL GMs, or assistant GMs, or scouting staffs or development people, I’ve always just been well accepted,” Castonguay said. “I think once you get past that, and you just start talking about hockey, and they realize you have the knowledge, I think knowledge is power and you kind of forget that you’re the only girl in the room sometimes.”

The Canucks (18-19-4) are currently seventh in the Pacific Division but are 10-4-2 under coach Bruce Boudreau since he replaced Travis Green on Dec. 5. They host the Edmonton Oilers on Tuesday (10 p.m. ET; SN, ESPN+, NHL LIVE).

Buccaneers QB Tom Brady on his future: ‘It’s not always what I want. It’s what we want as a family.’