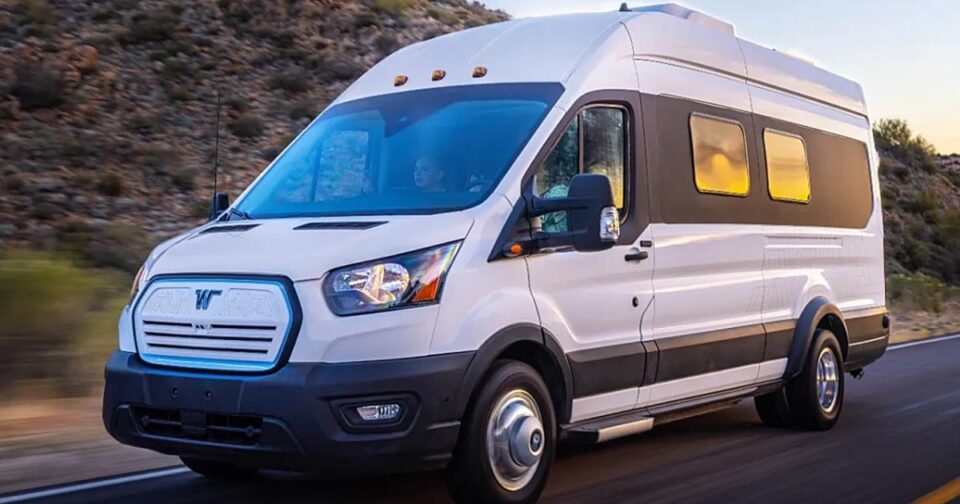 Sales of recreational vehicles have exploded since the start of the Covid crisis, with many Americans seeing them as a way to safely get out and go exploring. Now, Winnebago is just one of the brand names hoping to capitalize on the industry’s new popularity while also following the trend for electrification, offering the first all-electric, zero-emission motor home.

While not as bad as 1970s-era muscle cars, today’s recreational vehicles still suck down plenty of fuel. The Winnebago e-RV, revealed last week at the Florida RV SuperShow, is one of a small but growing number of battery-powered models that could change the face of the outdoor travel business over the coming decade.

Winnebago isn’t alone. Thor Industries revealed a battery-powered, “self-propelled” Airstream camper at the event, and Mercedes-Benz showed off a prototype camper version of its all-electric EQV van in Europe.

“The future is electric in the motor home industry,” said Klaus Rehkugler, the head of sales and marketing at Mercedes‑Benz Vans.

For now, those who want an environmentally friendly recreational vehicle will have to accept some sacrifices, starting with marginal range. And, as with passenger vehicles, RV buyers are likely to pay a premium for battery-powered models. The variety of choices and the features they offer are expected to grow rapidly.

The transportation industry as a whole is under pressure to clean up. At both the federal and state levels, manufacturers are being pressured to improve fuel efficiency and reduce emissions. President Joe Biden wants half of all passenger vehicles to be emission free by 2030. California regulators want all motor vehicles to go zero-emission by 2035.

Officially billed as a concept vehicle, Winnebago’s e-RV starts out as a Class B Ford Transit van. Rather than wait for the all-electric version Ford is working up, the RV maker swaps out the existing Transit’s gas drivetrain for an all-electric package developed by Lightning eMotors.

Specific powertrain details have yet to be released, although Winnebago did confirm that the e-RV is powered by an 86.0-kilowatt-hour lithium-ion battery pack that it expects would yield about 125 miles per charge.

Considering the RV mythos, that might not seem like very much for those looking to work their way across country. And indeed, a buyer would have to plan long trips carefully. But the company’s internal research reveals that only about one-third of its owners ever pilot their RVs more than 300 miles and that 54 percent normally travel less than 200 miles. A sizable share, it seems, simply use their motor homes as “base camps” when they head off to the beach or some other nearby destination.

A sizable share of RV owners simply use their motor homes as ‘base camps’ when they head off to the beach or some other nearby destination.

For those who would need to recharge along the way, Winnebago says the e-RV’s pack could be plugged in at home, at a campsite or at a high-speed public charger, where it could be ready to roll again in as little as 45 minutes.

While range may be limited, the e-RV won’t require other sacrifices. It retains classic RV features, such as a bed, a kitchenette and a shower, as well as the now-essential onboard WiFi network. The environmentally friendly theme carries over to the cabin, which uses sustainable materials like rubberized cork and wool for flooring and insulation. And it’s fitted with high-efficiency appliances that minimize energy demands that would further reduce range.

While Winnebago isn’t ready to talk production plans, Happe, the CEO, did nothing to downplay expectations, with a retail version of the e-RV likely to come in at or above $100,000.

Elsewhere, the latest concept version of the high-line Airstream brand starts out as one of the brand’s retro-futuristic camper trailers but adds twin electric motors drawing power from either one or two lithium-ion packs. The concept is described as “self-propelled,” but you can’t drive it independently, as you would with Winnebago’s e-RV. Instead, the eStream provides additional traction when it is being trailered. The approach, Thor claimed, would reduce the fuel consumption of the tow vehicle.

A smartphone remote control app, meanwhile, would let eStream owners unhitch the campers and maneuver them independently once they reached their camping sites — much like the remote self-parking apps offered on some new passenger vehicles.

Again, no production plans were announced, but Thor Industries said it plans to electrify its products going forward.

Paul A. Eisenstein is an NBC News contributor who covers the auto industry.