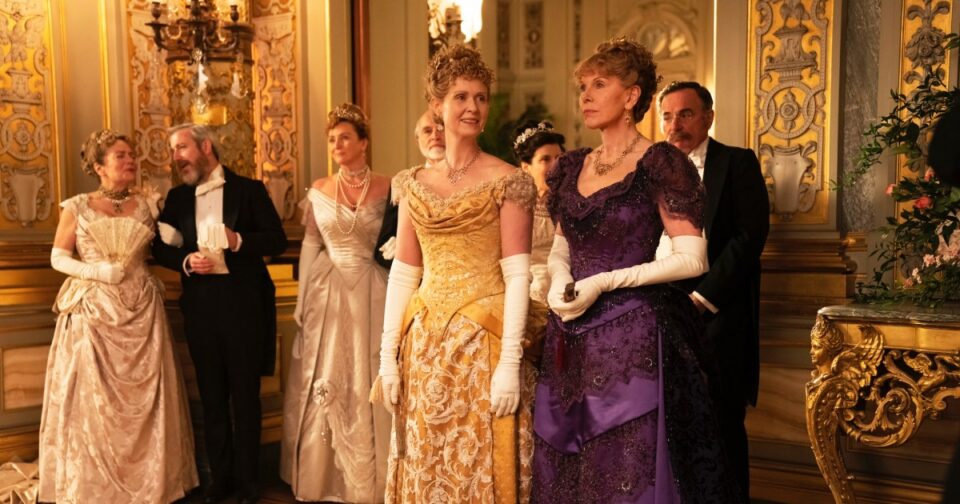 The moment “Downton Abbey” became a hit stateside, some type of Americanized version felt inevitable. But for every “The Office” success story, there are dozens of failures, from NBC’s attempt at remaking “Skins” to the very American failure of “The Great American Baking Show.” But “The Gilded Age,” now on HBO, is hoping its mixture of soapy spectacle and Victorian-era New York City can appeal to Americans even without the pastoral charms and alluring accents of “Downton.”

“Gilded Age” isn’t telling a tremendously new story, but it is a very well-done piece of prestige, period piece escapism. And it should also help cement the welcome trend of telling more diverse stories in historical dramas.

While the show, 10 years in the making, was originally designed as a New York City-set prequel centered on the coming-of-age of the beloved Duchess Cora Crawley, and focused on the ways robber barons sought legitimacy by buying into the old-world aristocracy. But during the series’ decadelong journey to production, its identity as a direct “Downton Abbey” prequel disappeared. “The Gilded Age” in its final form borrows from several storytelling classics, including “Romeo and Juliet.” Two warring families live directly across from Central Park, at the corner of 5th Avenue and 61st Street. Despite their hatred of each other, each family has sons and daughters of the right age and with varying levels of attraction to each other.

On one side of the block sits the longtime home of the van Rhijn family, currently owned by the widowed Agnes van Rhijn (Christine Baranski), who endured decades of an abusive marriage to earn her family’s spot in old-money New York. Her spinster sister Ada Brook (Cynthia Nixon) is Agnes’ constant companion and her son Oscar (Blake Ritson) plays the part publicly while living a closeted life downtown. As the series starts, they take in their poverty-stricken niece Marian (Louisa Jacobson), whose father’s gambling problem necessitated Agnes’ family-fortune-saving marriage (and ensuing marital sacrifice).

On the other side of the block, the new money, newcomer Russells have just finished building their ultramodern palace of a home. Husband George (Morgan Spector) is a railroad builder and wannabe monopolist, wife Bertha (Carrie Coon) is a social striver who pushed the family to relocate from downtown, and baby scions son Larry (Harry Richardson) and daughter Gladys (Taissa Farmiga) remain mostly unaware of how ferociously their parents are working to create a space for them in the upper echelons.

It’s an age-old plot, but “The Gilded Age” arrives with a racial and social awareness its “Downton Abbey” forebears did not. This awareness is part of a longer-term trend toward color consciousness adopted with varying levels of success by shows such as “Sanditon,” “Grantchester” and “The Long Song,” but unlike those PBS series, HBO’s entry will likely have a far larger mainstream footprint (and marketing budget).

In “The Gilded Age,” Agnes van Rhijn’s downtrodden niece Marian arrives in New York City after being rescued by Peggy Scott (Denée Benton). Peggy becomes the show’s principal “downstairs” character after Agnes hires her as a secretary. This also makes her an adept tour guide for the segregated societies of the north, and the robust, all-Black middle-class society that existed, albeit less visibly, alongside the white one.

The time it took to make “The Gilded Age” may ultimately be a blessing.

The downstairs stories of “Downton Abbey” captured the hearts of viewers as much, if not more, than that of the inhabitants upstairs. That hit made it look easy, but the PBS shows that followed, like “Beecham House” and “Victoria,” proved such a feat is anything but. (Even “Downtown” creator Julian Fellowes’ own series, “Belgravia,” couldn’t pull the same magic off twice.) But Peggy’s a complicated character, estranged from her family in Brooklyn, professionally ambitious, and with savvy is able to handle the power dynamics and microaggressions of both her upstairs employers and downstairs peers. (The Russells’ downstairs, by comparison, somewhat disappointingly centers on an overdramatic French chef and a housemaid who is eyeing the master.)

Thus, the time it took to make “The Gilded Age” may ultimately be a blessing. The show keeps all the familiar tropes of bustling servants, call bells, sweeping vistas of gorgeous houses, and a costume closet to die for. (Carrie Coon’s hat budget alone is something else.) Baranski brings all the ferocious bot mots of Maggie Smith’s famed Dowager Countess to her role as Agnes, and when she and Coon’s Bertha Russell finally meet, the verbal fireworks are worth the build-up. Fellowes also seems to have personally raided New York’s out-of-work theater crowd during the pandemic, securing guest starring turns from Audra McDonald, Kelli O’Hara, Patrick Page, John Douglas Thompson, Donna Murphy, Katie Finneran, and Jeanne Tripplehorn, just to name the ones who show up in the super-sized 80-minute premiere. (Nathan Lane’s here too, he just shows up later.)

That’s a lot of talent and taste stuffed into nine episodes. (And if there’s ever a musical episode, it will be brilliant.) Like the Russells, this series feels like it’s modernizing in the right direction, with plenty of exquisite drama along the way (albeit no accents).

Ani Bundel is a cultural critic who has been writing regularly since 2010. Her work can also be found at Elite Daily and WETA’s Telly Visions, where she also co-hosts “Telly Visions: The Podcast.”

What Ever Happened to Hotmail?