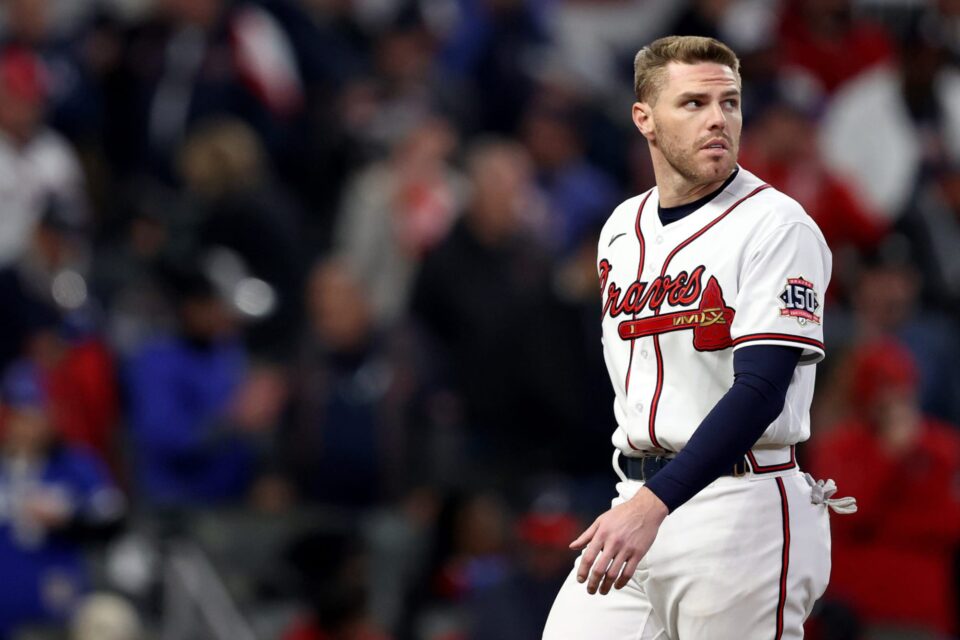 ATLANTA, GEORGIA – OCTOBER 30: Freddie Freeman #5 of the Atlanta Braves reacts following the sixth inning against the Houston Astros in Game Four of the World Series at Truist Park on October 30, 2021 in Atlanta, Georgia. (Photo by Elsa/Getty Images)

The Atlanta Braves reportedly have a fallback option if they do not re-sign first baseman Freddie Freeman.

The MLB lockout is still in place, but both the league and Players Association are swapping proposals for the collective bargaining agreement. Once the lockout ends, Atlanta Braves fans are going to wait and see if star first baseman Freddie Freeman re-signs with the team. But what if he doesn’t? Atlanta reportedly has a backup plan.

According to Ken Rosenthal of The Athletic, the Braves have had discussions prior to the lockout about trading for Oakland Athletics first baseman Matt Olson.

Braves have a trade replacement for first baseman Freddie FreemanRosenthal notes why the Braves would be interested in acquiring Olson from the Athletics. First, he is four-and-a-half years younger than Freeman. Second, he grew up in the suburbs of Atlanta, Ga.

The thing is, the Braves will likely have to surrender a lot to the Athletics, considering Olson has one more year of arbitration remaining before he becomes a free agent after the 2023 season.

It would be gut-wrenching for the fanbase to watch Freeman sign with another team in need of a first baseman, such as the New York Yankees. He is coming off a season where he led the league in runs scored (120), earned a spot on the All-Star team and helped the Braves win the World Series for the first time since 1995.

The best thing Braves fans can do is wait for the lockout to officially end, then wait for official word as to whether Freeman re-signs or moves on elsewhere. If that is the case, Atlanta has a reported backup plan in place.

Buccaneers QB Tom Brady on his future: ‘It’s not always what I want. It’s what we want as a family.’