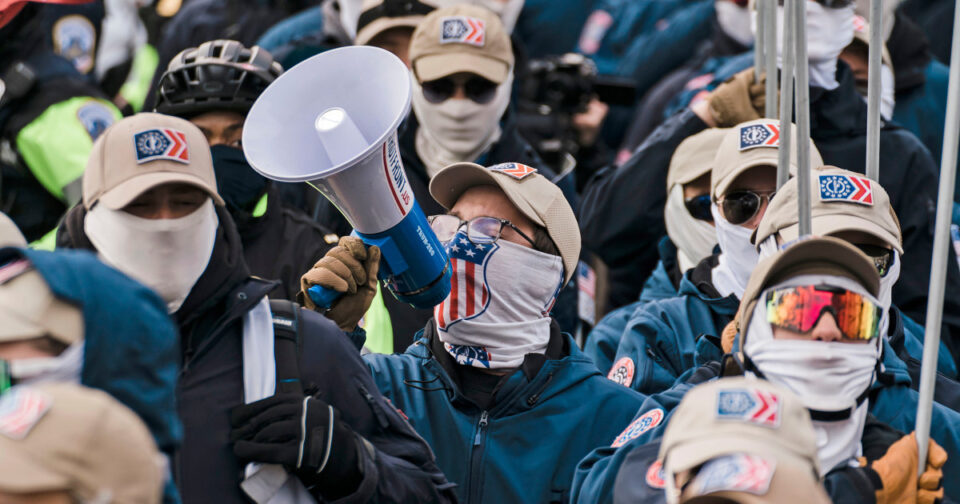 On Friday, anti-abortion organizers once again held the March for Life, an annual gathering on the National Mall featuring anti-abortion rights leaders and schoolchildren bused in from across the country. Although attendance numbers have waned in recent years, and despite a pandemic, organizers took to the stage Friday to boast about their political wins. Not surprisingly, the decadeslong effort to reshape the Supreme Court and potentially re-criminalize abortion by overturning Roe v. Wade was front and center. The speakers appropriated social justice language, claiming that the anti-abortion rights movement is one of love, “equality in the womb” and “pro-life is pro-woman” and that the “real racists” are those of us who stand against state-sanctioned violence and coercion and believe everyone should be able to decide whether, when and how to grow their families.

That’s the version of the rally they want you to see. What was happening offstage was far more insidious, even as it was historically predictable.

During the rally, videos began circulating on Twitter showing white supremacists, including members of Patriot Front — an extremist outfit that believes the white population is being replaced and needs to get its birthrates up — walking with other March for Life attendees; the uniformed and masked “patriots” carried shields and waved banners that read “Strong families make strong nations.” In other videos, attendees can be seen thanking Patriot Front members for attending and “supporting the right to life,” telling them to “be safe out there” and accepting their flyers. The crowd was jovial; as one woman reportedly told a photojournalist who explained that Patriot Front was a Christian fascist organization, “Well, as long as they’re pro-life.”

Of course, after the videos circulated, the national March for Life organization issued a statement disavowing Patriot Front’s attendance, reiterating its stance for “equality in the womb.” However, that condemnation falls flat considering members of Patriot Front have been attending the March for Life since 2017 and made a well-publicized appearance at March for Life’s Chicago event this month.

States started pushing for abortion restrictions and sterilization mandates in the mid-19th century. The reasoning was multi-faceted: White doctors wanted to force Black, brown, Indigenous and immigrant midwives out of the pregnancy care field to maintain domination. And white politicians sought to temper the expansion of Black political power during Reconstruction as Black people — and their babies — were no longer financially profitable for white slave owners. Many white political leaders at the time wanted to ensure that the white population grew at a rate that would outpace the newly freed Black population while also maintaining dominance over Indigenous communities and immigrants.

Much of the anti-abortion rights movement in its current iteration arose as a reaction to the Supreme Court’s mandating integrated schools, banning Christian prayer in public schools and forcing school desegregation in the 1960s and the 1970s. Conservatives jumped on the 1973 Supreme Court decision legalizing abortion, knowing it would make a powerful rallying cry. And it has. Along the way, anti-abortion rights advocates have been all too happy to stand next to, and even court, unsavory allies.

The March for Life has given a platform to noted white nationalists for years, including 2003 and 2012 rally speaker (and now former) Rep. Steve King, R-Iowa, who maintained an A+ rating from the Susan B. Anthony List and was considered a “pied piper” of the movement, even as he openly met with Austrian far-right white nationalists and questioned why the term “white supremacy” was offensive. Toward the end of his political career, King grew estranged from the movement, not because of his white nationalist stances but because he was pushing for extreme anti-abortion legislation before national anti-abortion rights organizations were ready.

Previous (and this year’s) marches have hosted characters like the disgraced Rev. Frank Pavone and Abby Johnson, the insurrection attendee and 2020 Republican National Convention speaker who claimed it was “smart” if police racially profile her adopted Black son — because Black people commit crimes. At this year’s event, Rep. Marjorie Taylor Green, R-Ga., who formed a caucus to promote “Anglo-Saxon political traditions,” was personally thanked by Jeanne Mancini, the president of March for Life. The white supremacist dog whistle is coming from inside the house.

As two women who’ve had abortions, we’ve always known the threats of the anti-abortion rights movement were real, even as many ignored the evidence. And we’ve watched as they misuse Martin Luther King Jr.’s quotes in memes to promote themselves as saviors for Black babies online while palling around with white nationalists offline. You cannot preach “love them both” while setting fires to clinics and shouting at vulnerable pregnant people.

Of course, the birth control movement has its own complicated history with eugenics. Some of its leaders also sought to maintain power through reproductive control — as critical race theory teaches us, systemic racism affects us all. The abortion liberation and reproductive justice movements must continue to evolve and learn from past mistakes.

In contrast, white nationalists are using abortion as a gateway recruiter for mainstream Christians, who may be open to overlooking the organizations’ racist agenda in favor of anti-abortion rights solidarity. But the truth is: Ignoring racism is racism. And that makes March for Life’s statements denouncing racism and condemning Patriot Front as hollow as chocolate Easter bunnies. Groups like Patriot Front aren’t hiding their goals or what they’re willing to do to achieve them. Anti-abortion rights groups are trying to have it both ways — but they’re not fooling anyone.

Renee Bracey Sherman is the founder and executive director of We Testify, an organization dedicated to the leadership and representation of people who have abortions, and co-author of the forthcoming book “Countering Abortionsplaining.”

Lizz Winstead is a co-creator of “The Daily Show” and the founder and chief creative officer of Abortion Access Front, a team of comedians, writers and producers that uses humor to destigmatize abortion and expose the extremist anti-choice forces working to destroy access to reproductive rights in all 50 states.