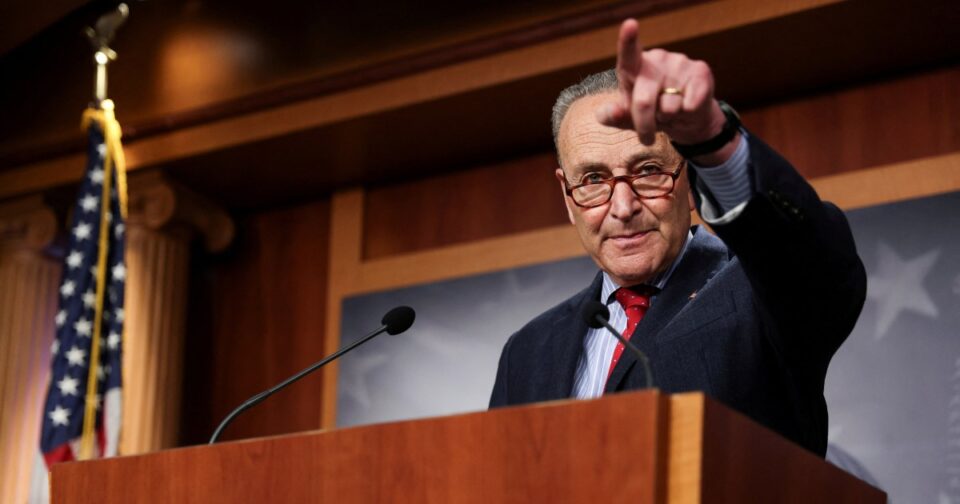 WASHINGTON — If it’s Wednesday … President Biden returns to “Build Back Better.” … Nancy Pelosi is running for re-election (but that doesn’t mean she’ll stick around the next Congress). … Hershel Walker announces raising $5.4 million for the quarter in Georgia Senate. … Sixty-five percent say they’re more concerned about children falling behind in school than they are the spread of Covid. … And Nina Turner wants a rematch against Rep. Shontel Brown.

But first: With Biden’s State of the Union coming up on March 1, the pressure is on Democrats to show movement on his legislative agenda and start teeing up some policy wins.

Unfortunately for Biden, things are at a low point right now, particularly in the Senate, and that’s putting more scrutiny on Majority Leader Chuck Schumer’s approach.

Schumer wanted to aim high and then try to drag the last holdouts — namely Sens. Joe Manchin, D-W.V., and Kyrsten Sinema, D-Ariz. — towards his position, rather than start from their preferred position and sell it to the rest of the caucus as a consensus approach.

On “Build Back Better,” the Senate opened with a $3.5 trillion framework, and the White House and leadership worked to bring Manchin and Sinema around. Then with voting rights, Schumer whipped everyone else in the caucus to support rules changes that many of them opposed until recently, leaving the party’s members, donors and activists a clear lane to pressure Manchin and Sinema.

In some ways, it’s the opposite of Barack Obama’s approach in 2009, when progressive activists complained Democrats were too quick to surrender policy concessions to centrist members for the sake of expediency. Even if turning the screws on them didn’t work, critics argued Democrats might have gotten more if they starting with a bigger opening bid.

If the “aim high” approach had worked, Schumer would look like a genius right now. The problem is that it’s failed to produce results since summer, and some Democrats are pining for the quieter consensus approach.

It’s also produced grassroots Democratic rage at Manchin and Sinema — with Sinema almost guaranteed to receive a primary challenge in 2024. (By the way, ask yourself: Which Senate leader has done a better job protecting his party’s centrist senator: Schumer with Sinema, or Mitch McConnell with Lisa Murkowski?)

There still may be chances to get BBB on track. There are some other opportunities to put wins on the board, like bipartisan legislation on science research and semiconductor manufacturing that the House and Senate are hashing out. A growing group of senators are exploring bipartisan changes to the Electoral Count Act to help prevent future Trump-like attempts to overturn the results.

But the schedule is also getting crowded, and the Senate may not be able to take up anything significant before going through negotiations to fund the government past Feb. 18. If Biden’s agenda fails to produce any more substantive wins, this summer, fall, and winter stretch of “aim high” tactics in the Senate is going to loom large in evaluations of his presidency.

Speaker Nancy Pelosi, D-Calif., announced yesterday that she is running for re-election.

Former President Donald Trump encouraged former State Department spokeswoman Morgan Ortagus to run for the now-open Tennessee 5th District House seat, saying in a statement yesterday she would have his endorsement if she runs.

Eighty-seven percent of Republicans, 66 percent of independents, 79 percent of dads, 65 percent of moms, 71 percent of whites and 59 percent of Hispanics all agree that kids falling behind outweigh the risks of spreading the virus during in-person school.

The only other big group with a majority more worried about the in-person spread at schools are Black voters — 52 percent shared that belief, compared to the 40 percent more concerned about kids falling behind.

Other numbers you need to know today

13 percent: The share of congressional staffers who make less than a living wage (pegged at $42,610 for a single adult with no kids in D.C.), per a new Issue One study shared with Roll Call.

$5.4 million: That’s how much Georgia GOP Senate hopeful Herschel Walker says his campaign raised during the fourth quarter of 2021.

$21.5 million: How much money South Carolina GOP Sen. Tim Scott had on hand for his campaign heading into 2022.

29: The number of House Democrats, now that Tennessee Rep. Jim Cooper announced his retirement, who are not running for re-election.

Market-watchers expect the Fed to signal its intent to raise rates in the coming months, with all eyes on its 2 p.m. statement.

Changes to voting laws could be a high-stakes consequence of the Pennsylvania governor’s race, the Philadelphia Inquirer reports.

‘We are seeing a new level of despair’: Latinas decry impact of Texas abortion law