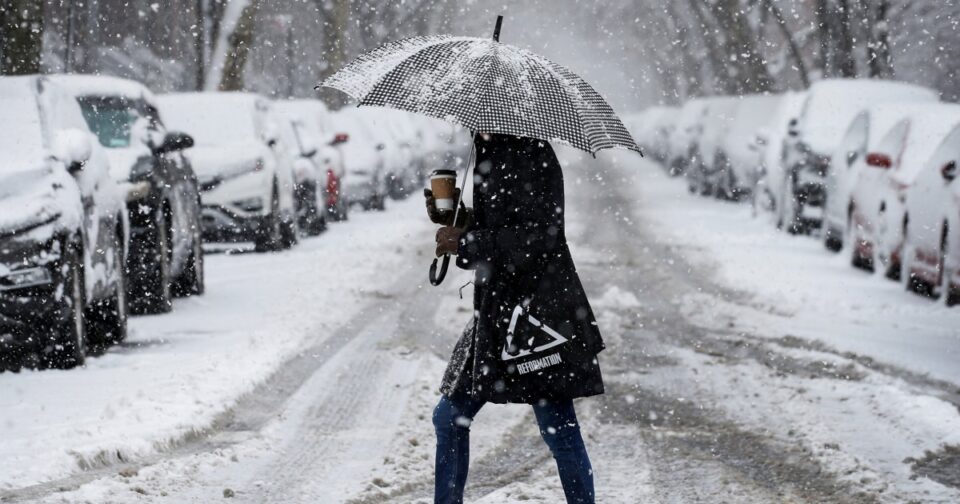 New York City could see as little as 2 inches of snow or as much as 20 inches of snow this weekend. That is the range of possibilities with the upcoming nor’easter forecast to slam the Northeast and New England beginning Friday night and lasting through Saturday.

On Wednesday morning, meteorologists were combing through the latest forecast model data in an attempt to get a handle on the track, timing and associated snow totals associated with an impending powerful winter storm.

There was still high uncertainty in the forecast, due to disagreement among the forecast models which were showing two distinct forecast scenarios: a storm that stays just far enough offshore to bring just a few inches of snow to the I-95 corridor or a storm that tracks close enough to produce a crippling snowstorm and potentially the first blizzard in four years.

The pieces will start to come together beginning on Friday, with a fast-moving storm system that will move through the mid-Atlantic and Northeast bringing some light “appetizer” snow to those regions. Meanwhile, another disturbance moving across the southern tier eventually becoming a coastal low off the Carolina coast.

The coastal storm is expected to rapidly intensify, going through a process called “bombogenesis,” and become a powerful bomb cyclone. The definition of bombogenesis is the center of the storm’s pressure dropping at least 24 millibars in 24 hours. This storm is forecast to double that.

A factor leading to the explosive development of the storm system will be the near-record warm waters of the western Atlantic Ocean which are running several degrees above average. Due to climate change, water temperatures along much of East Coast have warmed faster than 96 percent of world’s oceans. Just like in the case of hurricanes, warm water temperatures also fuel nor’easters.

If the two pieces on Friday merge, a stronger storm with heavier snow and higher winds is likely. Crippling double-digit snowfall totals would be possible over a wide area, hurricane-force wind gusts would be possible for coastal areas, and areas from New York to Boston could go under their first blizzard warnings since 2018.

If they don’t merge, a weaker storm farther out to sea with less snow and wind is likely.

Forecasters expect to have higher confidence in the track of the storm by later on Wednesday and early Thursday. This is because one of the disturbances critical to the evolution of the storm has finally come onshore over Alaska which means better sampling and data available for the forecast models.

Significant snowfall is likely across parts of the Northeast and New England, but exact totals and location of highest snow totals cannot be determined yet.

Coastal flooding is likely, but severity cannot be determined yet as will be dependent on the track of the storm.

Strong winds and power outages are likely, but exact wind gust speeds and who could see the damaging wind gusts cannot be determined yet.

On Wednesday morning, 226 million people woke up under below freezing temperatures. The cold air stretched from the Canadian border down to the Gulf Coast.

Wednesday was forecast to be the coldest day of the workweek for the Great Lakes, Northeast and Southeast.

While temperatures moderate slightly rest of week, another colder shot of arctic air is expected this weekend just in time for the approaching nor’easter.

High temperatures on Saturday for Washington, New York and Boston are all forecast to be in the low-to-mid 20s.

Support your children if they are gay, pope tells parents

Kathryn Kates, ‘Seinfeld’ and ‘Orange is the New Black’ actor, dies at 73

Is Buying an Aged Corporation a Good Idea?