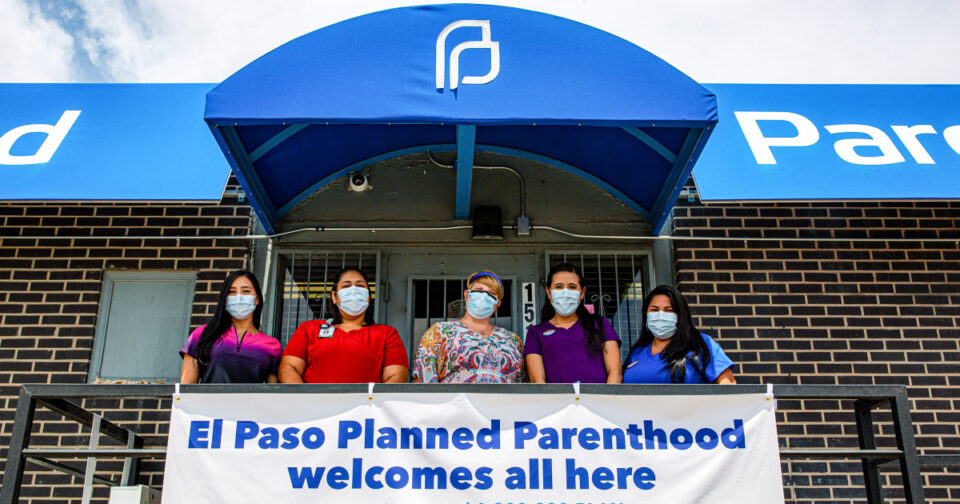 A woman who went to Planned Parenthood’s El Paso Health Center in Texas seeking an abortion early this month told the center’s workers she had been raped. They turned her down.

She was too far along into her pregnancy under the state’s new abortion law, Miranda Aguirre, the health center’s manager, told NBC News. Had the staff performed the abortion, the clinic would have run afoul of the law, risking a potential lawsuit.

The Texas law, known as Senate Bill 8, doesn’t make exceptions for women and girls who were raped.

Anyone who successfully sues an abortion provider in the state for allegedly breaking the new law can be awarded $10,000 by a court.

The El Paso health center’s staff helped the woman with other potential resources, but Aguirre said she had to huddle with her workers to help them deal with how the new law is playing out in reality.

“I said you know we tried, we tried, and is saying ‘we tried’ enough? Sometimes. And unfortunately, it is the reality we are working in,” she said.

“Unfortunately, it is not going to be the last patient we see like that,” Aguirre said, “and it’s stressful.”

Latinas are pushing back against the law

Hispanics are often thought of as more conservative than other Americans on the issue of abortion.

Almost 70 percent each of Asians and Black people said it should be legal in all or most cases.

The Hispanic opposition is showing as Latinas push back on Texas’ new law. They are running for office on abortion rights planks or helping women in need go to providers out of state, donating to funds that help pay for travel and the procedures.

Aguirre, a Latina born and raised in El Paso, left Austin to run the health center in her hometown “because it wasn’t something I had access to when I was younger, but mostly because of the way I was brought up,” which meant, “marry the first man you fall in love with,” she said. She has worked there nine years.

The center, like other clinics that offer abortions, is often the main health care provider for uninsured, low-income or immigrant Latinas.

With SB8 though, Latinas like Aguirre, who said her staff is all Latina, now are trying to maintain their aggressive outreach to give women health services, while they are restricted on how far they can go.

“It was a very sad day when Senate Bill 8 went into — when the law passed,” she said, pausing midsentence to choke back her emotions. “It was hard for us, because we knew what the limitations were and what we could and cannot offer for these patients.”

Texas’ new law, the most restrictive in the country, is being tested in court battles from the state level to the U.S. Supreme Court. Thus far, it has withstood attempts to put it on hold.

Opponents say the ban is taking effect before many women know they are pregnant, since it often takes longer than six weeks to notice a missed period or experience nausea or other symptoms associated with pregnancy. Women often are not visibly pregnant until the second trimester.

Texas lawmakers set the prohibition at six weeks on the assertion that it is when a fetal heartbeat can be detected on a sonogram. Many medical experts say it is inaccurate and misleading to call the activity a heartbeat.

“Pregnancies this early do not have a beating heart. There’s electrical activity within cells that will become a heart, and we see that on an ultrasound machine as a flickering that can be audible through the machine. We refer to that as cardiac motion,” said Dr. Bhavik Kumar, a medical provider at the Planned Parenthood Center for Choice of Houston.

Justice Sonia Sotomayor, the only Latina on the Supreme Court, wrote a scathing critique of the law in the high court’s latest action that essentially allows the law to continue for now.

“Because our precedents are clear that Texas cannot directly ban abortion before viability, the state legislature enacted a convoluted law that instills terror in those who assist women exercising their rights between 6 and 24 weeks,” she wrote.

Adrienne Mansanares, the CEO of Planned Parenthood of the Rocky Mountains, also used the word “terror” to describe the higher numbers of women, particularly women of color, coming from Texas to seek abortions at clinics in Colorado, New Mexico and Las Vegas.

The women arrive fearing they are doing something wrong by crossing state borders to get their abortion or that someone is following them and their abortion will be discovered when they return home, she said.

In Texas, about 42 percent of the women of childbearing years are Hispanic, according to the Federal Reserve Bank of Dallas.

Of the 56,358 abortions performed in and out of state for Texans in 2020 — before the new law took effect — 20,348 or 36 percent were for Hispanics, according to state data on induced terminations of pregnancy collected from abortion reports that providers are required to file.

There also are Latinas involved in anti-abortion efforts and who have celebrated Texas’ clampdown on abortions.

Christianity Today reported that pregnancy centers run by organizations that oppose abortion also say they are overwhelmed and seeing women in despair. The centers offer pregnancy tests and sonograms and do not offer abortions.

Texas has been steering money over the years into an “alternatives to abortion” program that then passes money on to other anti-abortion nonprofit groups providing an array of services to women. The state planned to increase the program’s budget twentyfold last year with a $100 million appropriation, the Texas Tribune reported.

Rush to decide and delays to get an abortion

Aguirre said the law is also forcing women to rush their decisions to terminate their pregnancies.

Under Texas law, women must wait at least 24 hours after their first visit to a clinic before getting an abortion. SB8 now requires abortion providers to check for cardiac activity after the waiting period, just before the procedure. As a result, some women feel pressured to schedule their abortion for as soon as possible to avoid the possibility that cardiac activity is detected before the abortion. That cuts down on time they have to arrange child care, gather money for the procedure or even think about their decision, Aguirre said.

“We have had a few patients we’ve had to turn away” after a second sonogram because cardiac activity was detected, she said.

Simultaneously, Mansanares said, her clinic in Colorado is seeing an increase in women wanting to terminate abortions later in their pregnancies.

Often, they are women who have needed time to arrange travel, child care, time off from work and to get the money to pay all those costs and the cost of the abortion, which can be more expensive later into the pregnancy, she said.

“This is not about white women of means. They are going to get an abortion, they always have. This is about keeping communities of color in poverty,” said Mansanares, whose staff is largely made up of Latinas, Indigenous and other women of color.

When Texas implemented a separate abortion restriction law in 2013, Latinas saw a bigger drop in abortion rate than white people, according to a study by the Texas Policy Evaluation Project at the University of Texas at Austin.

The project estimated last July that Texas’ newest  abortion law would prevent 8 in 10 people in the state from seeking an abortion.

Those most likely affected would be people who are Black, living on low incomes or who live far from an abortion provider, it estimated.

The law is particularly harsh on people who are undocumented. Because they don’t have legal permission to be in the country, they run the risk of being arrested while traveling between states.

Those who live closer to the border are unable to travel far from their hometowns because U.S. Customs and Border Protection checkpoints are located on roadways leading out of the border area. People who are not citizens or do not have legal permission to be in the U.S. can’t travel beyond them.

Cathy Torres, an organizing manager at the Frontera Fund, said the fund based in McAllen in the Rio Grande valley, assists people with abortion costs regardless of their citizenship or immigration status.

The costs have increased, because they now help pay airplane or bus fare or larger gasoline bills. In response to the law, the fund did see people step up with donations, she said.

“But, you know, the amount of money we are having to support people with is not sustainable,” Torres said. “It’s costing upwards of $800 to $1,500 to assist people and thankfully, thankfully, we have the means right now. But we cannot do this all the time, who can?”

Aguirre said that while her clinic is hamstrung to provide abortions, a service she believes still is needed, her staff now feels some liberty in educating Latinas about family planning and birth control and taking control of their reproductive health.

“It allows us to have pride in what we do,” she said. “We can’t help everybody, but those that we are helping, we are educating and they leave feeling confident in the decisions they are making.”

That, though, doesn’t erase the holes left by what workers can’t provide, she said.

“We take it all home with us at the end of the day, what we couldn’t do,” Aguirre said. “It just weighs on you and it weighs tremendously.”