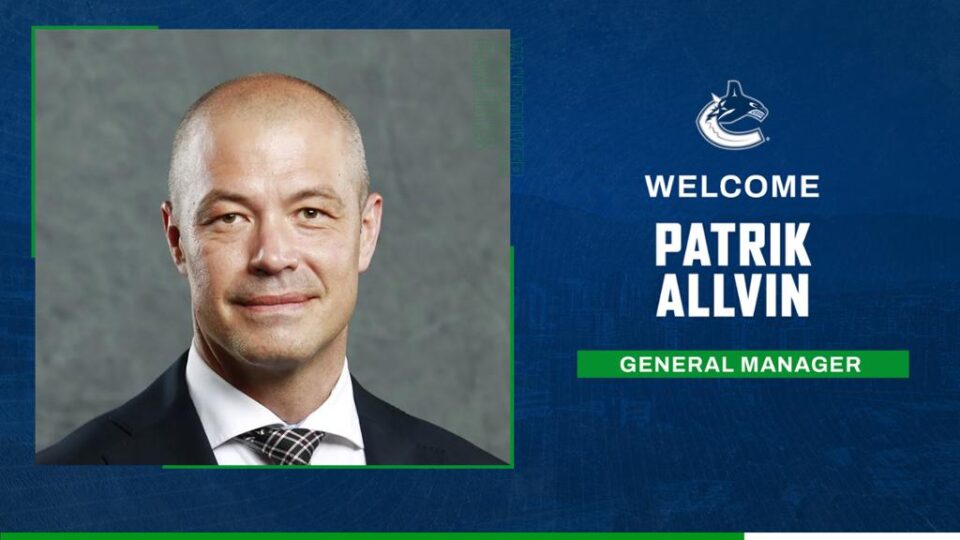 Patrik Allvin was hired as general manager of the Vancouver Canucks on Wednesday.

Allvin, who was the Pittsburgh Penguins assistant GM, spent the past 16 seasons with the Penguins and won the Stanley Cup three times (2009, 2016, 2017). He becomes the first Sweden-born general manager in NHL history, taking over a team that has big decisions to make, according to president of hockey operations Jim Rutherford.

The Canucks (18-19-5) are in seventh place in the eight-team Pacific Division, ahead of where they stood when they fired GM Jim Benning and coach Travis Green on Dec. 5, but behind where they hoped to be this season. Vancouver was 9-15-2 and last in the Pacific Division when Benning and Green were fired; they have gone 10-4-3 under coach Bruce Boudreau, who was hired to replace Green.

“There’s some good things going on here,” said Rutherford, who was hired as president of hockey operations Dec. 9 and served as GM when leading the search for someone to fill that role. “We have to add more players to get to where we want to get to, and that’s something that’s going to have to be decided here leading up to the [NHL] Trade Deadline, how do we go about that?

“We’ve got to figure out a way to get a little cushion on the [NHL salary] cap. It’s always difficult but being up against the cap and a team that’s not in the playoffs at this point in time is not a good thing. So some big decisions are coming up.”

Rutherford emphasized that Allvin would have full responsibility to make those decisions.

“He certainly doesn’t have to come running to me every time he’s making a decision, but when we get into some of the bigger decisions, I’ll be a little more involved,” Rutherford said. “But it’s Patrik’s job.”

“Coming from Pittsburgh, we parted ways with a lot of picks, but we’d always find ways to get players,” Allvin said. “I think that this organization with fewer picks coming up, I think this is a great landing spot for a lot of European and college free agent players. They’re going to get opportunities.”

Allvin is getting his opportunity now. He thanked the Canucks and Rutherford on Wednesday for “stepping outside the box” in hiring him.

“It’s a big day for Swedish hockey and the European part of the game,” Allvin said. “Obviously it’s a big day for me. I’m truly honored and proud to be the first one, but also to join a team with Jim Rutherford.”

The 47-year-old has a history with Rutherford; they were together for seven seasons with the Penguins from 2014-21. Allvin became general manager after Rutherford left Pittsburgh on Jan. 27, 2021, because of personal reasons. He was considered for the permanent position, but Ron Hextall was hired Feb. 9.

Though Allvin mentioned the history of the Canucks as a draw for him in Vancouver, he said the opportunity to team up with Rutherford again was equally enticing.

“[Patrik] and I worked together for seven years in Pittsburgh, and I really learned to respect him — respect him not only as a person but as a great hockey guy,” Rutherford said. “He’s worked in all aspects of hockey operation. He brings a lot of experience. He brings a winning culture to Vancouver, by being part of winning three Cups in Pittsburgh. So I look forward to working with him again.”

Now that Rutherford has mostly filled out his hockey operations department — Emilie Castonguay was hired as assistant general manager on Tuesday, the first woman to hold the role in the organization — the Canucks can turn to decisions that need to be made about their future.

Allvin, a native of Falun, Sweden, began his career as a European scout for the Montreal Canadiens in 2002, spending four seasons with them before joining the Penguins in the same role. After six seasons, he became Pittsburgh’s director of European scouting for five seasons, then the team’s director of amateur scouting in 2017. He was named assistant general manager Nov. 4, 2020.

“Obviously, we want to play a fast and skilled game. And I think in order to be successful you’ve got to be able to find players outside the first round in the [NHL Draft]. You need to complement your organization with college and European free agents, and I think that’s something that I’m looking forward to.”

A former defenseman, Allvin played for Mora IK in HockeyAllsvenskan in Sweden for two seasons. He also played in the ECHL and the International Hockey League in North America.