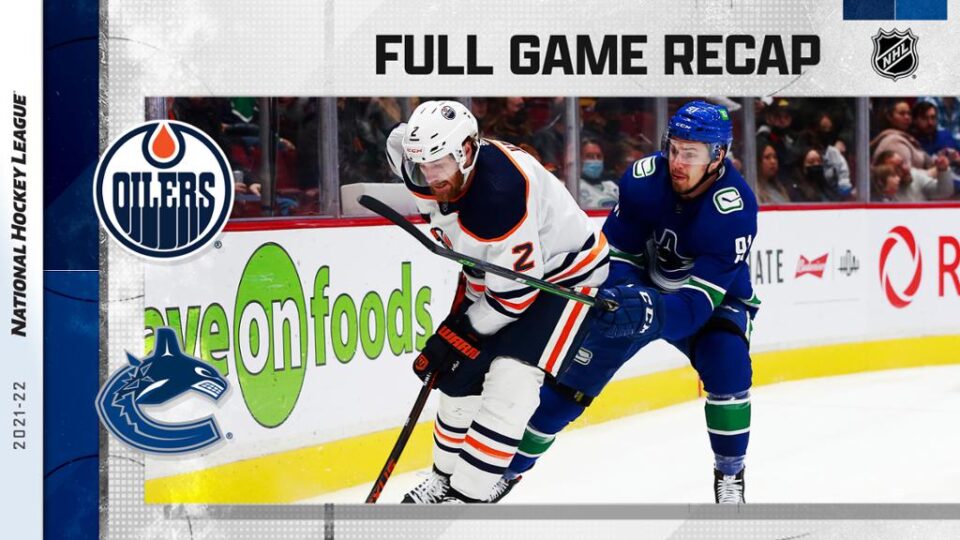 VANCOUVER — Connor McDavid scored with 24 seconds left in overtime, and the Edmonton Oilers rallied from two goals down in the third period to defeat the Vancouver Canucks 3-2 at Rogers Arena on Tuesday.

McDavid drove to the net and chipped a 2-on-1 pass from defenseman Darnell Nurse over the pad of goalie Spencer Martin for his first goal in six games.

“I’ve been a bit snake bit,” said McDavid, who also had an assist and is fourth in the NHL with 57 points (20 goals, 37 assists) in 37 games. “I feel like I’m getting my chances but I haven’t been able to put one away, so it was nice to be able to contribute.”

Ryan McLeod and Leon Draisaitl scored in the third period for the Oilers (26-11-5), who have won two in a row after going 0-5-2 in the previous seven.

Mikko Koskinen made 25 saves for Edmonton, which also fell behind 2-0 against the Calgary Flames on Saturday before rallying to win 5-3.

“Not ideal, but it’s nice we find ways to come back,” coach Dave Tippett said. “That shows a lot of will on our team.”

Martin made 47 saves in his second NHL start in five seasons because top goalies Thatcher Demko and Jaroslav Halak are in NHL COVID-19 protocol. Martin got his first NHL start Friday against the Florida Panthers, making 33 saves in a 2-1 shootout loss, but was put in protocol Saturday and couldn’t play against the St. Louis Blues on Sunday before being cleared Tuesday.

“I’m pretty excited for these opportunities,” Martin said. “It was a slight letdown when you test positive, I’m sure for any guy who goes through that, and then to be back in the lineup felt great. … I feel really good right now but having a 2-0 lead going into the third period, you want to close that out every time so it’s frustrating to not be able to finish that off.”

Martin made a good impression on McDavid.

“It seems to go either two ways with guys you don’t know, they either the lay an egg or they’re amazing,” McDavid said. “Tonight he was amazing. We had lots of chances and he was in the right position all night and we had to work for our goals.”

Elias Pettersson and Tyler Motte scored 2:47 apart in the second period for the Canucks (18-19-5), who went 0-1-1 on a three-game homestand. Vancouver has two wins in its past eight games (2-4-2) after starting 8-0-1 under coach Bruce Boudreau, who replaced Travis Green on Dec. 5.

Pettersson put the Canucks ahead 1-0 with a solo rush at 14:26 of the second period, scoring on a wrist shot from the top of the left face-off circle.

Motte made it 2-0 with a shorthanded breakaway shot under Koskinen’s right pad at 17:13. The play started with J.T. Miller, back in the lineup after missing the past two games in COVID-19 protocol, blocking a McDavid power-play chance at an open net at the other end before sending Motte in alone.

Koskinen stopped Motte on another shorthanded breakaway at 8:30 and Draisaitl tied it at 10:24 with a one-timer after a cross-ice pass from Ryan Nugent-Hopkins.

“Massive,” McDavid said of Koskinen’s save. “He really bailed me out there. Going down 3-1 there would have been tough. [Mikko] has taken a lot of heat and we want to play well in front of him and make his nights easier. We didn’t necessarily do that tonight but he made a couple of big saves and that was one.”

Nugent-Hopkins played in his first game since a lower-body injury Dec. 1.

“He’s so smart out there,” McDavid said. “It just makes the game so much easier for everybody around him, so great to have him back and it’s an all-world pass to find Leon there and when Leon gets chances like that, they usually go in.”

NOTES: Oilers forward Zack Kassian had two shots and three hits while playing 11:38 after missing one game with non-COVID-19 illness. … Miller was removed from protocol Tuesday morning but Demko, who entered protocol the same day as Miller on Jan. 20, wasn’t cleared to return and Boudreau isn’t sure if he’ll play Thursday against the Winnipeg Jets. … Canucks forward Tanner Pearson was placed in protocol on Tuesday. … Canucks defenseman Tyler Myers played his 800th NHL game.