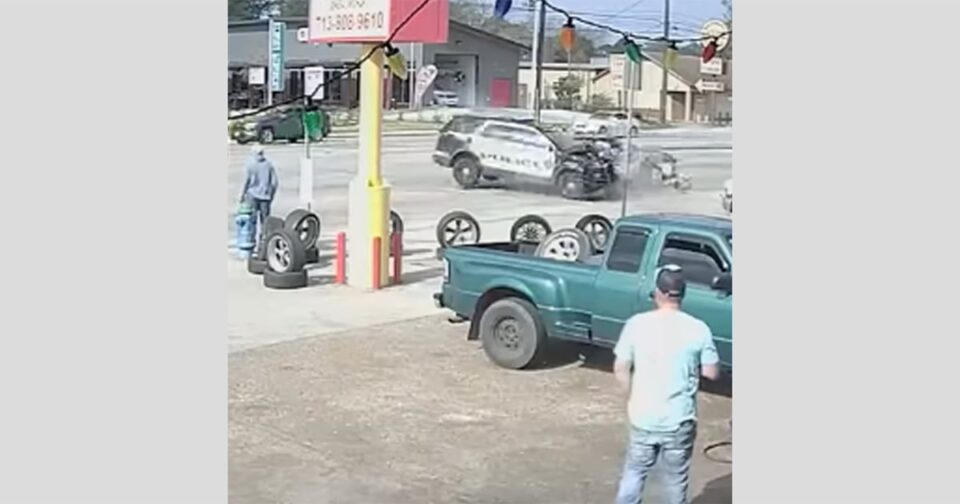 The video, released by the Houston Police Department, shows surveillance and body camera video of the Dec. 26 crash.

In a video statement accompanying the footage, Houston Assistant Chief Yasar Bashir said the officer was not responding to a call for service and did not have lights or sirens on when he struck the Cadillac sedan driven by Charles Payne.

“The thing happened so quick,” the officer, identified by a Houston police spokesman as Christopher Cabrera, can be heard saying in a body camera video that recorded some of the incident’s aftermath and was also released Tuesday. “I’m still trying to figure out what happened.”

Cabrera, who has been a Houston police officer since 2017, was driving on a road north of downtown Houston around noon when the crash occurred, the Police Department said.

Payne was later pronounced dead at a hospital, the department said.

In the body camera video, Cabrera is heard repeatedly asking responding paramedics if the man who he’d struck was OK. At one point, one of them says, “Yeah, they’re just pinned a little bit.”

Cabrera appears to decline medical treatment in the video, though the department said in a statement that he was also taken to a hospital with minor injuries. He was relieved of duty while authorities review the incident, per standard protocol, police department spokesman Kese Smith said in an interview.

Payne’s family declined to comment on the video Wednesday, but another of his sons, Roderick Dearborne, told KPRC last month that he believed Cabrera was driving too fast.

“He was speeding in a 35 and caused death — instant death,” Dearborne told the station at his father’s funeral earlier this month. “We have a closed casket going on in here now.”

“Someone had to be speeding for him to be killed in an impact hit like that,” Kevin Payne said, according to KPRC.

The department has not said how fast Cabrera was driving.

Cabrera did not respond to a message seeking comment on a number listed under his name. Smith, citing the ongoing investigation, declined to comment.

The Houston Police Officers’ Union did not respond to a request for comment.

How to Navigate the Ethical Risks of Doing Business in China