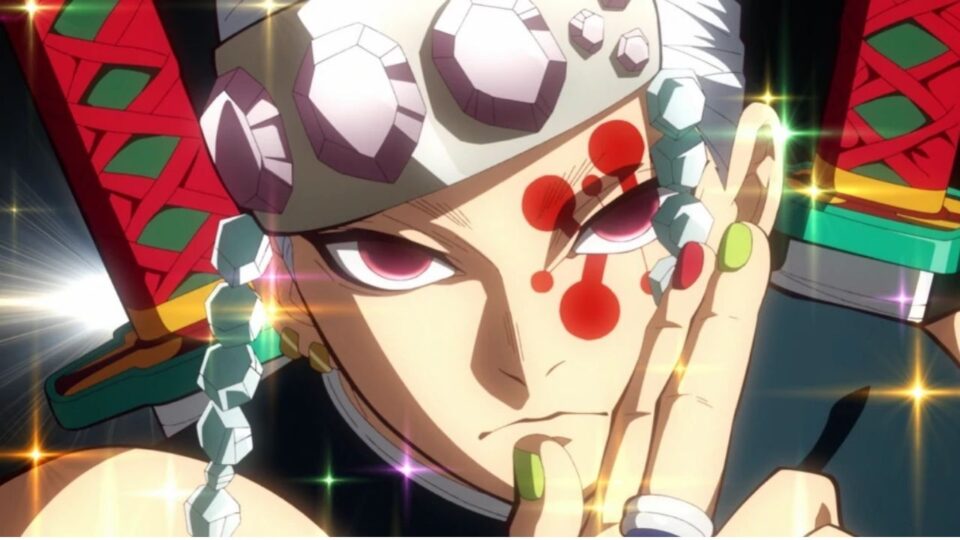 We are already 8 episodes into the Entertainment District arc of Demon Slayer: Kimetsu no Yaiba, and there is little that fans have to complain about.

The story has been exhilarating, while the animation has surpassed awesomeness, especially with all that added “flamboyance” in the form of my new favorite, Uzui.

It doesn’t feel like too much time has passed since we bid the Flame Hashira, Kyojuro Rengoku goodbye. But the Sound Hashira, Tengen Uzui, has taken his place in this arc, as mentor for Tanjiro, Inosuke, and Zenitsu.

In the latest episode, we finally get to see some of Uzui’s backstory. His family origins and his younger brother were teased in his flashback.

Who is Tengen Uzui’s Brother?

Tengen Uzui’s brother is the only other surviving sibling from his family. He is Tengen’s second youngest brother, exactly the opposite in character from Tengen.

Tengen’s brother is exactly like his father – cold and inhumane, considering subordinates as pawns and women as commodities.

The other Uzui brother’s name hasn’t been revealed yet, but we already know everything we need to about him. Anyone who has a personality that is opposite to that of Tengen, is bound to be dislikable.

Tengen’s brother completely disregards the life and free will of other people and in Tengen’s words, has “no human quality”. Tengen Uzui states that he doesn’t want to be anything like his brother, or his father.

Tengen was originally born into a family of ninjas or shinobi, with 8 other siblings. His father was a ruthless, heartless maniac, who put his children through such hardcore training, that 3 of them died before they were even 10 years old.

He tricked his children to fight and kill each other as part of a training exercise, and by the age of 15, only Tengen and his younger brother were left alive.

In the panic of his declining family, the father became even more obsessed with the rigorous shinobi training. Tengen’s brother followed in his father’s footsteps, reflecting his thoughts and actions.

The Uzui patriarch tried to teach his children not to place too much importance on innocent lives, that they could and should be disposed of if necessary.

His brother, like his father, believed in polygamy and objectified women; he didn’t care if his wives lived or died as long as they gave birth to heirs.

Although Tengen has 3 wives himself, we all know how much love and affection he has for each one of them.

Tengen, disgusted by his father’s selfish and cruel ways, finally left the clan permanently before training to become a Demon Slayer.

In season 3, episode 8: “Gathering”, Uzui faces the Upper Rank 6 demon siblings, Gyutaro and Daki, to whom he reveals his identity.

Gyutaro is convinced that Tengen is the chosen one, because his poisonous blood sickles have no effect on him. Tengen tells him that this is merely because he has shinobi blood running through his veins and that gives him resistance to poison.

Ninjas are supposed to be extinct since the Edo era, and Tengen and his brother are the only known shinobi on the show as of now. Tengen could never bring himself to kill his brother or his father and put an end to his disgraceful dynasty.

This only proves that Tengen saves his blade solely for demons, and that his heart is still in the right place, despite his terrible, terrifying childhood.

As Kagaya Ubuyashiki tells Uzui when he joins the Demon Slayer Corps: “It’s hard to stay on the battlefield denying the values that were instilled into you since your youth. Despite all the contradictions and conflicts, you […] still face forward and fight.”

About Demon Slayer: Kimetsu No Yaiba

Demon Slayer: Kimetsu no Yaiba is a Japanese manga series written and illustrated by Koyoharu Gotoge. Its publication in Shueisha’s Weekly Shonen Jump began in February 2016 with 19 collected tankōbon volumes released as of present.

In a world filled with demons and demon slayers, Kimetsu no Yaiba follows the lives of two siblings Tanjiro and Nezuko Kamado after— the murder of their family at the hands of a demon. Their hardship does not end there, as Nezuko’s life is spared only for her to live as a demon.

As the oldest sibling, Tanjiro vows to protect and cure his sister. The story traces the bond of this brother-sister or better yet, demon slayer and demon combo against the odds of an arch antagonist and the society.


Sometimes we include links to online retail stores and/or online campaigns. If you click on one and make a purchase we may receive a small commission. For more information, go here.

Basically Everybody Under 40 Hates Washington