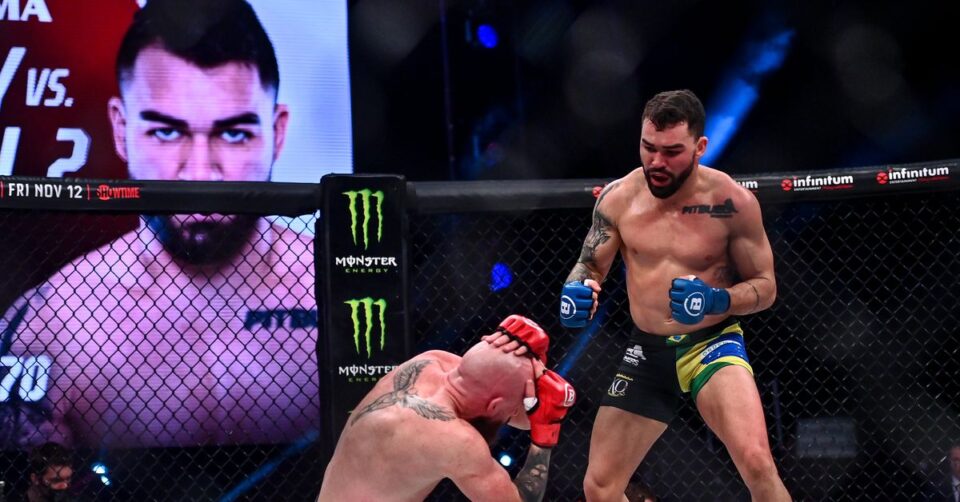 A superfight is not in the plans of the older ‘Pitbull’ brother for now.

After winning the vacant Bellator lightweight belt back in November 2021, Patricky Freire has other opponents in mind instead of the man who took his sibling’s featherweight title: A.J. McKee.

In an interview with Combate, Freire said he wants his brother to be able to rematch McKee for the title, so Patricky prefers to stay out of the way for the time being. Instead, the lightweight champions is focused on the title challengers ahead of him, and has some names on his mind for his first defense.

“That’s a fight I wouldn’t take, because I don’t want to get in the way of my brother’s rematch,” Patricky said. “I accept to fight anyone, at any time. I’m a fighter. I am. I know some guys who prefer to run. I don’t turn down any opponents. I’ve never turned down a fight everytime I was offered a fight. I’ve never asked for an opponent change. The only reason is my brother. Because it would get in the way of my brother’s future rematch.”

“I want to fight soon,” Freire added. “I didn’t take any time off. I didn’t stray from my diet during the holidays. No champagne, no wine. We’ve been negotiating for a title fight soon. I hope to have that fight and win. Brent Primus is a former champion who has been talking a lot. He’s dying to fight me, even though he ran from me once. We also have Sidney Outlaw, who’s the number one guy in the rankings. There is also that buffoon A.J. McKee, who has been talking a lot. He’s always making videos to get attention. Let’s wait and see who is my next opponent.”

In his last outing, Freire (24-10) became the lightweight champion by knocking out Queally, back in November 2021. Before that, the 36-year-old had lost to the same man via doctor stoppage TKO, in May 2021, which resulted in the immediate rematch but for the title that his brother Patricio vacated.

The Cavs are more than a good story, they’re a surprise contender with a sky-high ceiling