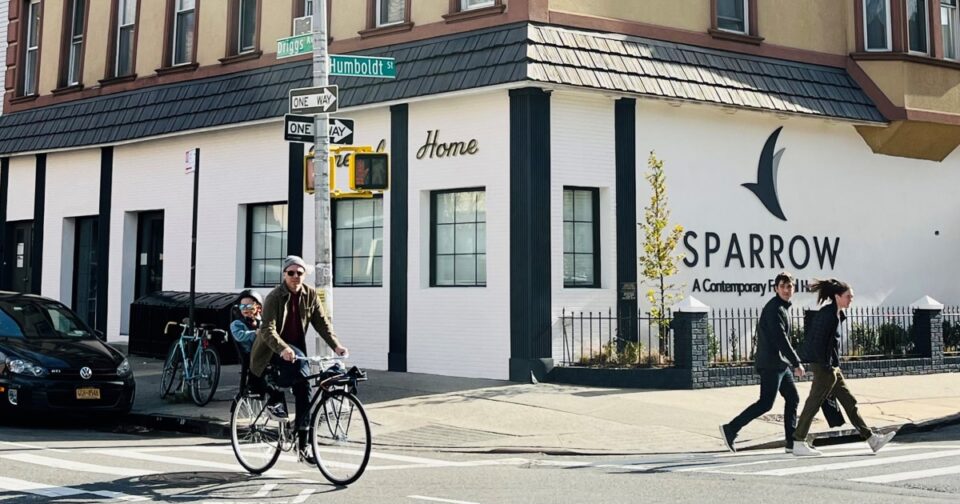 There’s a spot in Brooklyn where you can attend your own funeral.

Called an “exit party,” it’s just one of the personalized final farewells that Sparrow, which bills itself as a “contemporary funeral home,” offers its customers. There have been none so far.

“Basically, it’s a place where folks can gather to celebrate the life of somebody with a terminal illness,” Lily Sage Weinrieb, Sparrow’s funeral director, said. “It gives the person who is dying the chance to say goodbye before they pass on. And it gives the people who have come to say goodbye a way of doing so in a way that hopefully makes everybody feel comfortable.”

It is also yet another example of the shift in the way Americans mourn and think of funerals — a process that industry experts say has taken on a new urgency in the age of Covid-19.

“We in the United States still don’t really talk about death and dying,” Sage Weinrieb said. “Covid is changing that.”

Suelin Chen of Cake, an online “end of life” planning site that gets 40 million visitors a year, agreed.

“The pandemic has changed how we relate to death, especially for younger people,” she said. “It has opened up the conversation.”

She said that prior to the pandemic, most of the people who visited Cake, which is based outside Boston, were millennials, referring to those born between 1981 and 1996.

“During the pandemic, we saw a huge increase in Gen Z visitors,” Chen said, referring to people born after 1997. “This is a generation that grew up with the pandemic and was already concerned about the climate crisis. So, death was already on their minds.”

Since the start of the pandemic, companies such as “Cake” and “Lantern,” which bills itself as “the single source of guidance for navigating life before and after a death,” have made creative changes to meet the demands of a new generation of Americans that is no longer is satisfied with old-fashioned funerals.

With the death toll from Covid now closing in on 900,000 and much of the U.S. still grappling with the omicron variant, mortality is on the minds of millions of Americans, experts said. And the funeral industry has had to adapt to restrictions on public gatherings aimed at preventing the spread of the coronavirus while virtual funeral-related ceremonies have become ubiquitous since the start of the pandemic.

“We’re even starting to see funerals on TikTok,” Chen said.

But things were changing in the funeral industry even before Covid.

In 2015, more Americans chose cremation over traditional burial in a casket for the first time, according to the National Funeral Directors Association. And the industry projects that by 2040, “the number of casketed burials will account for just 16 % of U.S. deaths.”

“The cost, of course, is a consideration,” Lantern co-founder Liz Eddy, 31, said. “The price of caskets is also out of reach for many consumers. Additionally, younger generations are considering the negative impact of embalming on the planet. There are lots of chemicals used in embalming that are harmful to the environment.”

“When we launched, we knew a number of things were converging,” Eddy said. “The baby boomers are giving way to a more digital savvy generation of planners, and we are in the midst of cultural shifts away from tradition and towards customization. Like most industries, end-of-life planning is heavily affected by these shifts.”

Chen said the decline in the number of Americans who identify as part of an organized religion is also changing the way “we, as a nation, say goodbye to our loved ones.”

“So there is not a script and people are looking for alternatives,” she said.

Eddy, who grew up in Montclair, New Jersey, and now lives in Brooklyn in New York City, said she realized this when it came time to bury her grandmother in 2018.

“I remember going through this when my grandmother died, which is how we ended up launching Lantern,” she said. “It felt so bizarre to me to use a traditional funeral home, to sit down with a total stranger, in a building I’d never been in before, and pour out my emotions in a room full of coffins.”

There had to be a better way, she said.

“So, we created a digital future planning and funeral home experience that allows them, in part, to find those alternatives,” Eddy said.

Of the people who venture onto the Lantern site, 60 percent are under the age of 44, and 65 percent cited “making sure my funeral and memorial represent me” as a reason, she said.

“We launched in January 2020, so we’ve mostly existed in the Covid era,” Eddy said. “But I can safely say we’ve seen a dramatic increase in users who are younger, tend to be female, and who are interested in planning for the future.”

What are the alternatives to traditional funerals and cremation?

“Cremation is not the most environmentally friendly option,” Chen said. “There are also many other alternative burial methods that are gaining in popularity.”

For example, she said, there is aquamation where water is used to break down a body instead of fire.

“Desmond Tutu opted for this,” Chen said, referring to the South African archbishop who helped lead the fight against apartheid and who died in December.

There is also what’s known as a natural burial, in which there is no casket and the body is wrapped in a shroud and buried directly in the earth where it’s allowed to decompose naturally.

Back in Brooklyn, Sage Weinrieb said that because of pandemic restrictions — and because Sparrow has only been in business since November — it has not yet had a chance to host an exit party at its establishment, which is located in what was formerly a traditional Polish American funeral home in the Greenpoint section of the borough.

But the idea of giving a dying person a formal way of saying farewell to friends and family has been around for years and is typically referred to as a “living funeral,” she said.

“We don’t call them that because they might not feel like funerals, at all,” Sage Weinrieb said.

Still, the very fact exit parties could potentially become “a thing” is yet another example of the shift in the way Americans mourn and bury their dead, she said.

“A lot of people don’t know that there are other options beyond the traditional funerals,” Sage Weinrieb said. “But we’re trying to change that.”