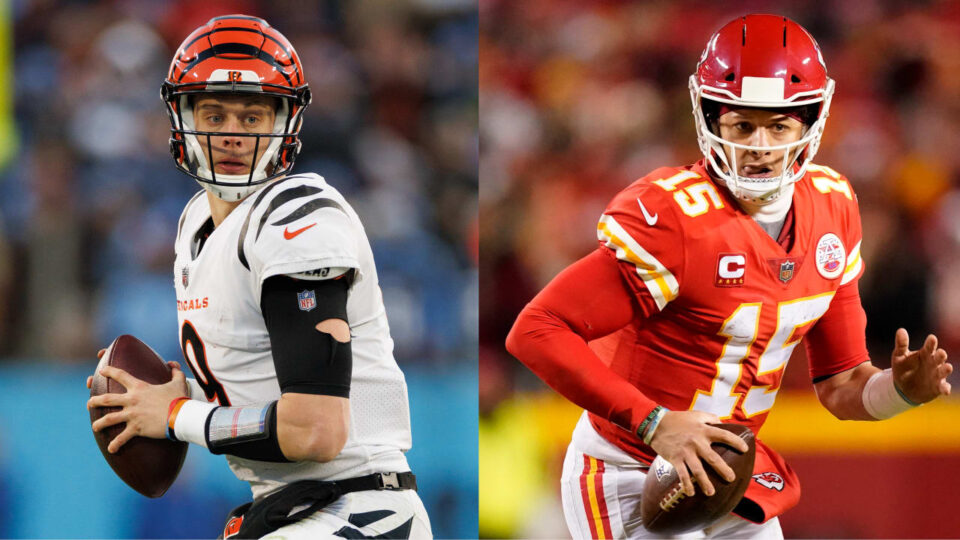 Gregg Rosenthal went 2-2 straight up and 2-2 against the spread on his Divisional Round NFL picks, bringing his season totals to 166-115-1 and 148-132-1, respectively. How will he fare on Championship Sunday? His picks are below.

The lines below provided by Caesars are current as of 12 p.m. ET on Thursday, Jan. 27 unless otherwise noted below.

WHERE: GEHA Field at Arrowhead Stadium (Kansas City, Mo.)WHEN: 3 p.m. ET | CBS, Paramount+SPREAD: Bengals +7 | O/U: 54.5The numbers don’t flatter the Bengals. The Chiefs are favored by a touchdown because they were a better team during a diminished season, and they are peaking now. The Chiefs are up to second in offensive EPA, and the Bengals are 11th. Patrick Mahomes has entered The Matrix again, and there’s not much reason to believe the Bengals’ defense will be any better at slowing him down than the Bills were.

I just don’t like the idea of spotting Joe Burrow seven points. The Week 17 matchup between these teams was a reminder that this Chiefs’ defense isn’t very good and may be worse than it’s been since 2018. They are down to 24th in defensive DVOA on the season and have looked overwhelmed against quality quarterbacks for over a month. Justin Herbert cut them up, just like Josh Allen did last week. The Broncos pushed them around. And Burrow had no problems dropping 34 points on them last time. In the Chiefs’ last four games against teams not piloted by the memory of Ben Roethlisberger, they’ve allowed 30.5 points and 422.3 yards on average.

This doesn’t make the Chiefs’ defense unique. Most defenses struggle against top-tier quarterbacks. It’s just worth remembering that the terrible defensive numbers put up by the Chiefs early in the season and late in the season are just as instructive as their hot streak in the middle of the season. Like most mediocre defenses, their performance is almost entirely dependent on the quality of their opponent, and they have a tough one this week.

Ja’Marr Chase cooked up Tyrann Mathieu on multiple occasions in the team’s first meeting. Tee Higgins is similarly difficult to leave against man coverage if Steve Spagnuolo sends extra rushers. Even after Burrow burned the Chiefs against the blitz the first time out, Spags will be tempted to send pressure, because his front isn’t winning regularly enough. Frank Clark has been struggling, and even Chris Jones hasn’t been as dominant lately. On Sunday, for the first time since Burrow faced the Chiefs at the beginning of the month, he can expect reasonable pass protection.

If it sounds like I’m trying to convince myself the Bengals have a shot this week, well, you nailed it! I’ve got reasons this Bengals team makes me smile. In an offense-first league, I don’t trust either of these defenses to make many stops, similar to the Chargers-Chiefs, Bengals-Chiefs and Bills-Chiefs games that came before it. All of those games came down to the final possession, and two went to overtime. That’s why I love the Bengals +7 this week, just like I loved the 49ers +6 last week. And just like that game, if I’m going to love the underdog to cover, I may as well go all the way.

WHERE: SoFi Stadium (Los Angeles)WHEN: 6:30 p.m. ET | FOXSPREAD: Rams -3.5 | O/U: 46Cliches are often cliches because they are true. The same theory often applies for basic football analysis. The 49ers pushed the Rams around up front in Week 18, as they’ve done for much of the Sean McVay era. With their season on the line, San Francisco’s pass rush got home quickly, and the defensive line stuffed the Rams’ running game. Despite Los Angeles snagging two interceptions, it took one of Matthew Stafford’s best games all season, packed with wow throws, just to get the Rams to overtime.

Stafford crushes the blitz; just ask Bucs defensive coordinator Todd Bowles. The 49ers don’t need to blitz, so the key matchup in this game will be the 49ers’ front four against the Rams’ offensive line. If given any semblance of time, Stafford will find open receivers.

The quarterback mismatch here feels especially pronounced after the last few weeks. Jimmy Garoppolo is regressing, perhaps due to injury. He has two touchdowns and six picks in his last four starts. Pro Football Focus credits him with two big-time throws in that span and 10 (!) turnover-worthy plays. Stafford, on the other hand, is on a heater.

So is the Rams’ defense. The 49ers countered the Rams’ fearsome pass rush in Week 18 by getting the ball out of Garoppolo’s hands even faster than usual, but he still took three sacks and had three turnover-worthy plays. The expected presence of 49ers left tackle Trent Williams, who missed the first meeting, should make a difference. But right tackle Tom Compton has a lot to deal with on the other side, and Williams needs to be at full strength to grapple with Von Miller, who has turned the clock back to 2018.

The Rams’ secondary, which lost both starting safeties during the collapse against the 49ers, has improbably looked better with recently un-retired Eric Weddle and Nick Scott making plays on the back end. (One starter, Taylor Rapp, is expected to return.) They will be tested, because the 49ers’ receivers and running backs are the hardest to tackle in open space in the league.

In a game where so little separates the two teams, it could come down to game management. McVay’s conservative approach with the lead has hurt him in recent games, including against the 49ers. I believe McVay will learn from those fresh experiences and give Stafford the leeway to take his team to the promised land.

Both coaches knew at the end of the 2020 season that they weren’t good enough at the quarterback position, and both made dramatic moves to upgrade, sending away multiple draft picks. But only one of those newly acquired quarterbacks is playing in this game. In a matchup where both defenses are peaking, that’s going to be the difference.

The Cavs are more than a good story, they’re a surprise contender with a sky-high ceiling