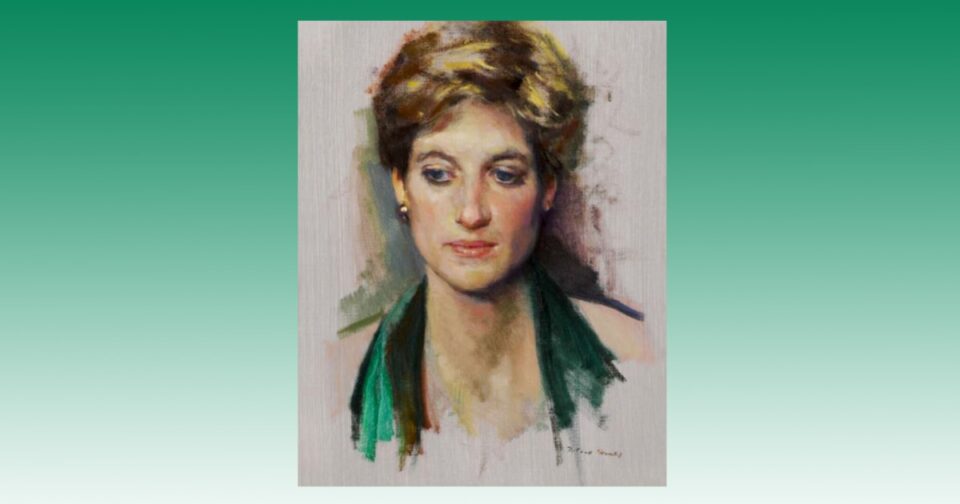 A rare portrait of Diana, Princess of Wales, sold for more than $200,000 Thursday, fetching ten times its highest estimate, according to auction house Sotheby’s.

The oil on canvas painting by late American artist Nelson Shanks depicts a pensive Diana looking down to her right side, as if deep in thought.

The head study was completed during the more than 35 hours of sittings Diana had in 1994 for a separate full-length portrait. That portrait was originally hung in Kensington Palace, but now hangs in her ancestral home in Althorp in Northamptonshire, Sotheby’s said.

In the full-length piece, which Diana had more than 30 sittings for, the princess is painted wearing a white blouse. The head study shows her in Shank’s original outfit choice — a green halter dress by Catherine Walker.

The final portrait, which depicts Diana with a similar thoughtful expression, “reflects the emotional toll of Diana’s public life in the mid-1990s, but also her inner resilience,” Sotheby’s wrote.

The terms of Diana’s divorce from Prince Charles were finalized in 1996 after years of turmoil. She died from injuries sustained in a car crash in August 1997, a tragedy that sent shockwaves around the world.

During her sittings with Shanks, the People’s Princess was said to have developed a friendship with both the artist and his wife.

In a letter to the artist, she wrote of how she missed their time together, writing: “I do miss you and Leona in London, as coming to the Studio was a safe haven, so full of support and love,” Sotheby’s said.

In a photo of one of the sittings, Diana can be seen grinning as Shanks paints her portrait at the Tite Street studio in London, U.K.

Shanks died at the age of 77 in August 2015 after being diagnosed with prostate cancer.

He was celebrated for his portrait of Diana, as well as for a famous painting of former President Bill Clinton among other notable works, including portraits of Pope John Paul II, President Ronald Reagan, Margaret Thatcher and Luciano Pavarotti.

In the months before his death, Shanks revealed that his portrait of Clinton contained a hidden message, confessing that a shadow to Clinton’s right was a nod to the Monica Lewinsky scandal.

The shadow was of a blue dress that the artist said he had placed on a mannequin while working on the painting in 2005. Shanks, who had referred to Clinton as “the most famous liar of all time,” said he was never quite able to shake the Lewinsky scandal from his mind.

“I was aware that it was a blue dress,” Shanks told NBC News after revealing his secret. “and it had a certain echo, let’s say, of some history that we’re aware of.”