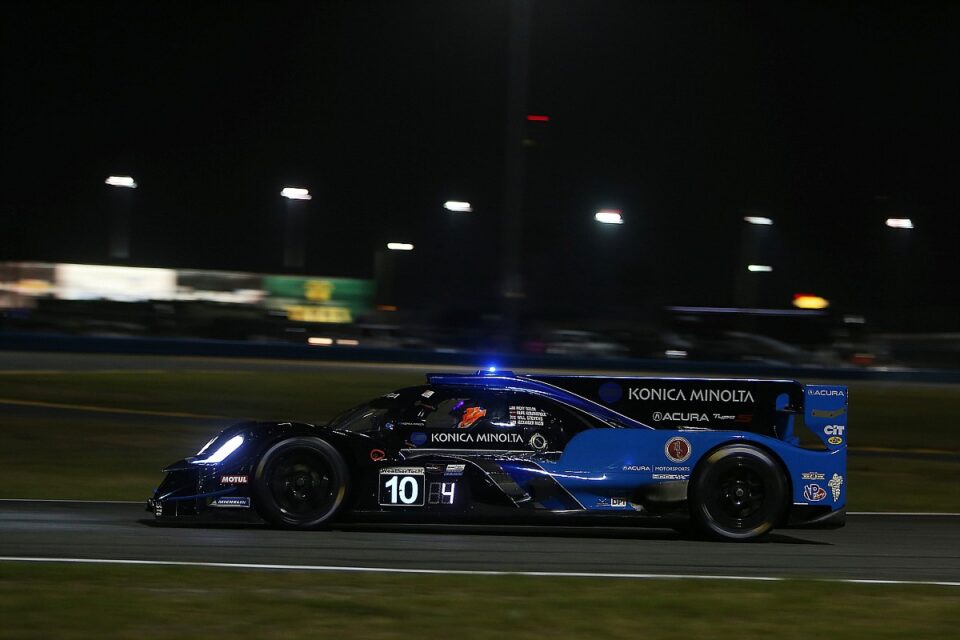 raThe cold and wet conditions meant that most teams limited their running in Thursday evening’s 1hr45min session ahead of Saturday’s IMSA WeatherTech SportsCar Championship season opener, which is expected to be dry.

Albuquerque set the quickest time at the wheel of the #10 WTR Acura of 1m48.730s with 38 minutes remaining, going 0.733s quicker than the #01 Chip Ganassi Racing Cadillac DPi-V.R of reigning IndyCar champion Alex Palou.

Fourth overall was the best of the LMP2 runners, with ex-Formula 2 driver Luca Ghiotto leaving it late to post the quickest time in the class of 1m49.597s aboard the #69 G-Drive Racing by APR Oreca.

That was enough to beat the Tower Motorsport Oreca of Rui Andrade by over two seconds, while another IndyCar star, Patricio O’Ward, was third in class aboard the #81 DragonSpeed entry.

Best of the remaining DPi runners was the #5 JDC-Miller MotorSports Cadillac of Tristan Vautier, who was eighth overall behind the #68 G-Drive LMP2 car driven by DTM star Rene Rast.

The #02 Ganassi Cadillac and the two AXR-run cars, the #31 Whelen Engineering Caddy and the #48 Ally machine, did not set laptimes.

In LMP3, Ugo de Wilde set the pace aboard the #26 Muehlner Motorsports Duqueine with a best effort of 1m56.933s – some 1.7s ahead of the next-best car in the class, the Sean Creech Motorsport Ligier of Seb Priaulx.

GTD Pro was topped by the #97 Proton-run WeatherTech Racing Mercedes-AMG GT3, with Daniel Juncadella posting the fastest time of 1m58.431s.

Another Mercedes was fastest in GTD, the SunEnergy1 car of Raffaele Marciello, a further 0.148s back and narrowly ahead of the second-best Pro car, the Pfaff Motorsports Porsche 911 GT3 R driven by Matt Campbell.

Third in GTD Pro was Andrea Caldarelli in the #63 TR3 Racing Lamborghini Huracan GT3, followed by Corvette Racing newcomer Marco Sorensen in the #4 C8.R and Matteo Cairoli in the #79 WeatherTech Porsche.

Franck Perera was second-fastest in GTD aboard the T3 Motorsport Lambo and Daniel Morad in the Alegra Motorsports Mercedes.

The final practice session for the 2022 Rolex 24 at Daytona takes place on Friday at 11.15am local time.