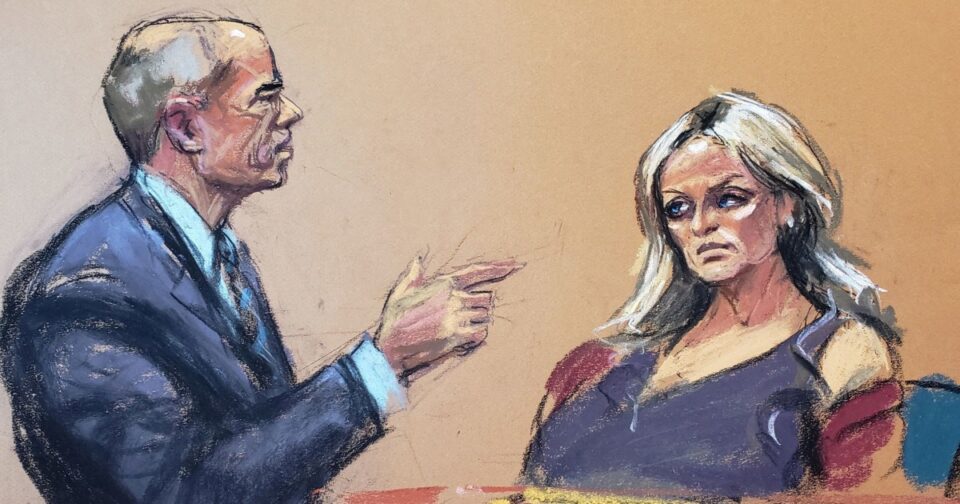 One-time adult film actor Stormy Daniels told jurors Friday she had no choice but to hire now-disgraced attorney Michael Avenatti, because other lawyers “were just afraid” and she was “out of options.”

Daniels is testifying in a federal prosecution of Avenatti, 50, who is accused of stealing about $300,000 of an $800,000 advance that was supposed to be paid to his former client for her 2018 book, “Full Disclosure.”

The autobiography included details about an affair she allegedly had with real estate developer and then-reality TV star Donald Trump.

Avenatti has pleaded not guilty to wire fraud and aggravated identity theft.

“I was out of options” and had to hire Avenatti, Daniels told jurors in New York and the man accused of stealing from her.

Daniels is facing the incredibly rare challenge of answering cross-examination question from the defendant himself, Avenatti.

Earlier in the week, U.S. District Judge Jesse M. Furman granted Avenatti’s request to act as his own attorney. Avenatti cited a “breakdown” with his lawyers over trial strategy, and Furman allowed the unorthodox move.

Daniels agreed with Avenatti that she hired him, in part, because other attorneys wanted large upfront payments. But there were other reasons too, she said.

“Some were just afraid,” the witness said. “I didn’t know who else to call.”

Avenatti cited a contract they signed which said that if the attorney ever helped secure a money-making book deal that he “shall be entitled to a reasonable percentage to be agreed upon between” them.

Avenatti asked Daniels if that contract meant he’s entitled to some money from her book deal.

“You are very entitled,” Daniels shot back, drawing some light chuckles from the audience in a lower Manhattan courtroom.

The defendant and witness also sparred about previous statements she had made denying any sexual relationship with the future president.

Daniels admitted one denial of a Trump affair, in which she said “it never happened,” was false.

“At the time you signed the statement you knew it to be false, right?” Avenatti asked his former client.

“Yes,” said Daniels, who was represented by another lawyer when she signed the “never happened” statement on Jan. 30, 2018.

After Avenatti was done with his cross-examination, Daniels reiterated her accusations against the defendant through questions by Assistant U.S. Attorney Robert Sobelman.

“That he had been lying to me, that he stole from me, that he forged my signature,” she said of Avenatti.

The gallery on Friday included Michael Cohen, Trump’s former fixer and personal attorney, who made payments to Daniels to conceal their alleged affair.

Cohen was in court earlier this week to seemingly taunt Avenatti. The defendant made crude remarks toward him, mocking his one-time support of Trump.

Avenatti told the judge he’s still not decided whether to testify in his own defense.

But the defendant said he’s “very strongly” leaning towards testifying.

During much of the Trump administration, Avenatti was one of the most recognizable figures on cable TV news as a strident critic of the then president.

Avenatti was convicted in 2020 of extortion, transmission of interstate communications with intent to extort and wire fraud for threats he made against sports equipment and apparel giant Nike.

Last year, a federal judge sentenced him to 2½ years behind bars and he’s set to report to prison for that conviction later this year.

Nubia confirms that the Z40 Pro is on the way, potentially upgraded camera and cooling technology in tow