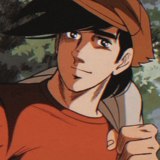 The official Twitter account for TMS Entertainment’s US branch has announced that its official YouTube channel now features the Tomorrow’s Joe 2 anime orginally broadcast from 1980 to 1981 in Japan with English subtitles. Currently, the first three episodes are available. TMS describes the series:

After Tōru Rikiishi’s death, Joe Yabuki leaves the boxing ring, wandering from city to city, with nowhere to go. However, during his travels, Joe reconvenes with his previous rivals and decides to stand in the ring once again. Joe fights past fierce battles against high-ranking boxers from around the world to finally have a match with the world champion, José Mendoza… This undying masterpiece depicts the brutal struggle of a youth who commit his everything to boxing. — Joe, one of the top ranked boxers in the world, no longer has the yearning or desire to enter the ring again after killing his previous opponent by landing a wicked left jab to his temple. His confidence and competitive spirit is restored when he decides to overcome his fear by facing the uncrowned king from Venezuela, Carlos Rivera.