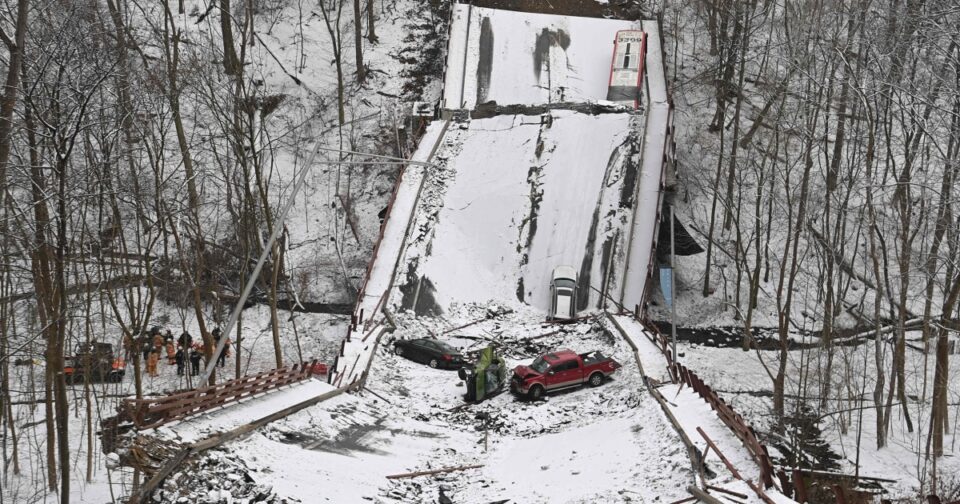 The Pittsburgh bridge that collapsed early Friday, injuring 10 people, was in poor condition and not targeted for improvements under the federal infrastructure bill, state records show.

Pennsylvania is set to receive more than $327 million in federal funding for bridge repair and replacement under the infrastructure plan, with about $49 million going to “off-system,” or local, bridges like the Forbes Avenue bridge.

But the bridge is not among the highway and bridge projects targeted for federal funding in the state’s 2021 transportation improvement program.

City officials haven’t said why the bridge, built in 1970, wasn’t placed on the list for federal infrastructure funding.

The 447-foot, steel, rigid frame bridge had an overall 4 rating and was listed in poor condition, according to the Pennsylvania Department of Transportation. Ratings range from 0 to 9, with the highest number receiving an excellent score.

Specifically, the bridge was handed a pair of 4s for its deck and superstructure, but the substructure was rated 6, state transportation records show.

Officials are investigating what caused the bridge to give way, the city of Pittsburgh said in a news release. The National Transportation Safety Board is also sending a team to the scene, the agency said on Twitter.

“We need it. This bipartisan infrastructure law is critical to southwest Pennsylvania and the city of Pittsburgh,” the mayor said during a Friday news conference. “We know we have bridges that we have to take care of.”

The Forbes Avenue bridge carries traffic over Frick Park, one of the largest parks within Pittsburgh’s city limits, Pennsylvania Lt. Gov. John Fetterman said on MSNBC on Friday. The bridge is over a walking trail in the park, Fetterman said.

About 14,500 vehicles cross the bridge each day, according to the U.S. Department of Transportation.

Pennsylvania has the third-largest number of bridges in the nation, state officials said. The average age of bridges on the state system is over 50 years old.

“Today’s bridge collapse underscores the urgent need for Congress to authorize spending to repair bridges nationwide so that the historic infrastructure bill can fulfill its promise,” John Schneidawind, the association’s vice president of public affairs, said.

More than 46,000 U.S. bridges, or about 7.5 percent, have been rated in poor condition, according to the American Society of Civil Engineers’ 2021 “Report Card for America’s Infrastructure.”

“This just highlights and brings a magnifying glass to the need of infrastructure improvement both in Pittsburgh and also nationally. There’s been a deficit of investing in infrastructure in Pennsylvania,” Jonathan Shimko, past president of the Pittsburgh section of the American Society of Civil Engineers, said. “We’ve known that there needs to be attention here, and this brings that into focus.”

Pittsburgh Fire Chief Darryl Jones said there hadn’t been any previous complaints to his department about the bridge, which would have forced fire crews to reroute to emergency scenes.

“We would have been notified if the bridge had a problem,” he said. “There were never any restrictions.”

With Biden in town, city officials reiterated the need for bridge repair.

“With him coming today to talk about this infrastructure bill, today is significant of that,” Gainey, the mayor, said. “We could have some serious injuries.”