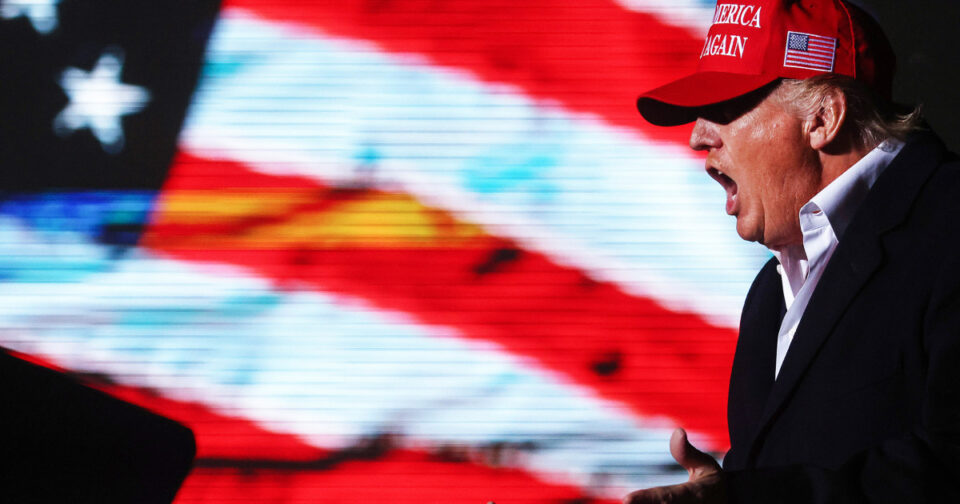 On Saturday, Trump is set to throw red meat to his base — and continue gearing up for a possible 2024 presidential run — at the Houston-area “Save America” rally. In this alternate reality, the ongoing investigation into his election scheming is all a witch hunt, those “alternate electors” were just trying to help America, and he and his fellow plotters are the real victims.

Back in the real world, the Justice Department announced on Tuesday it was investigating the Trump campaign’s bogus elector slate scheme, which has quickly become a focus of the House select committee investigating Jan. 6. The scheme began in December 2020 and involved Republicans in seven states’ sending Congress forged and fraudulent alternate electoral slates naming Donald Trump the winner of the presidential election.

In this alternate reality, the ongoing investigation into his election scheming is all a witch hunt, and he and his fellow plotters are the victims.

Like the Justice Department’s Jan. 13 indictment of 11 Oath Keepers on charges of seditious conspiracy and the Jan. 6 committee’s subpoena surge, this Justice Department announcement represents another milestone toward full accountability. Importantly, revelation of the phony electoral slates, together with a newly unearthed draft executive order that would have directed the Defense Department to confiscate voting machines, highlights the existence of something we have been calling “Plan A.”

This plan was the first phase of the Trump administration’s plot to overturn the 2020 election. The Capitol assault aimed at pressuring Vice President Mike Pence to subvert the certification of President Joe Biden’s victory — “Plan B” — would have been needed as a backup in the event “Plan A” failed. On Jan. 28, the select committee subpoenaed 14 of the “alternate electors” in the fraudulent electoral slate scheme. The select committee’s probe continues to accumulate evidence suggesting that the violence on Jan. 6 is inseparable from what led up to it.

And it it is crucial for the Justice Department to connect the nonviolent and the violent halves of Trump’s attempted coup. This would allow presentation of the whole picture to jurors if leaders are indicted.

At minimum, the criminal investigation of both parts of the plot involves potential charges under 18 USC §§ 371, 1512 and 2384 — defrauding the United States, “corruptly impeding” an official proceeding and seditiously conspiring against the government.

Failure to include both parts of the scheme in any indictment of leaders would be a colossal error. Only by connecting all evidentiary dots of the entire plot can prosecutors show jurors that any attempted coup is criminal, all the worse when the failure of a nonviolent coup triggers bloodshed and death.

The electoral slate scheme and the draft executive order to seize voting machines added pieces to the puzzle of all that was being planned behind the scenes before any insurrectionist stepped foot on the Capitol grounds.

Central to “Plan A” was getting Pence to delay Congress’ official declaration of Biden’s victory by halting the electoral count. To that end, CNN and The Washington Post have reported that members of the Trump campaign solicited Republicans in seven states to submit fraudulent alternate slates. Rudy Giuliani, Trump’s personal lawyer at the time, helped oversee the effort. Republicans sent the phony certifications to the National Archives for forwarding to the Senate, but the National Archives rejected them.

Trump campaign lawyer Boris Epshteyn was involved, as well. He now admits his participation but pretends he was merely helping create the slates as “contingencies” in case some court somewhere finally found the original slates to be tainted by pervasive voter fraud. (More than 60 courts rejected Trump campaign lawsuits based on the “big lie,” and former Attorney General William Barr called Trump’s voter fraud claims “bull—-.”)

Unfortunately for Epshteyn’s “contingent slates” cover story, the “contingency” language appeared only in New Mexico’s and Pennsylvania’s certificates. In five states’ certificates, the language did not say that the documents had been submitted only “in case” a court invalidated the certified Democratic slate of electors. Rather, the Republican certificates declared falsely and unequivocally that they set forth the states’ official “duly appointed electors.”

Notably, in Pennsylvania, the alternate “electors” had refused to sign the nonconditional version proposed by the Trump campaign. In combination with the five other states’ certificates including the original language, the Pennsylvania electors’ refusal affirms the Trump campaign’s fraudulent wording and design.

In connection with the scheme, the Justice Department should also investigate the involvement of GOP lawmakers like Rep. Louie Gohmert of Texas. On Dec. 27, 2020, Gohmert filed a lawsuit seeking a judicial declaration that Pence had the constitutional power to decide what to do with competing slates. The suit falsely statedthat “the State of Arizona (and several others) have appointed two competing slates of electors,” leaving little doubt about Gohmert’s knowledge of the fraudulent plan. (The suit was dismissed.)

Some parts of “Plan A” may have been hiding in plain sight, lost in a fire hose of conspiratorial lunacy. On Dec.18, 2020, we might have been excused for thinking retired Gen. Mike Flynn was on a loopy lark of his own when he said Trump “could immediately … seize every single one of these machines around the country.” As it turns out, he may have actually been “in the loop” of Plan A.

In fact, two days later, Flynn and his lawyer, Sidney Powell, participated in a chaotic White House meeting about the plan to seize voting machines. (Powell was sanctioned last year for her misrepresentations in a lawsuit challenging Michigan’s vote.) It was reported at the time that Trump was contemplating appointing Powell as a special counsel.

But for the strenuous opposition of White House Counsel Pat Cipollone at the Dec. 20 White House meeting, the executive order might have gone into effect. As Cipollone knew, 18 USC § 1385 makes it a crime to use the military domestically to “engage in civilian law enforcement unless … expressly authorized by a statute or the Constitution.”

We expect the Justice Department to investigate this scheme and to do so immediately if it has not started already. Should Congress change hands in 2023, it will surely amplify Trump’s framing of the narrative as a witch hunt, complicating the task of any investigation, indictment or trial.

Nothing short of convicting Trump for his role in the insurrection will disqualify him from running again in 2024, and claiming the mantle of a martyred hero rather than of a disgraced and convicted insurrectionist.

For now, the important focus is on robustly investigating the entire post-election plot as an integrated conspiracy with two parts, each aimed at keeping Donald Trump in power.

Laurence H. Tribe is the Carl M. Loeb University Professor and Professor of Constitutional Law Emeritus at Harvard, the author of many books about the Constitution and the Supreme Court, and a Supreme Court advocate. Follow him on Twitter @tribelaw.