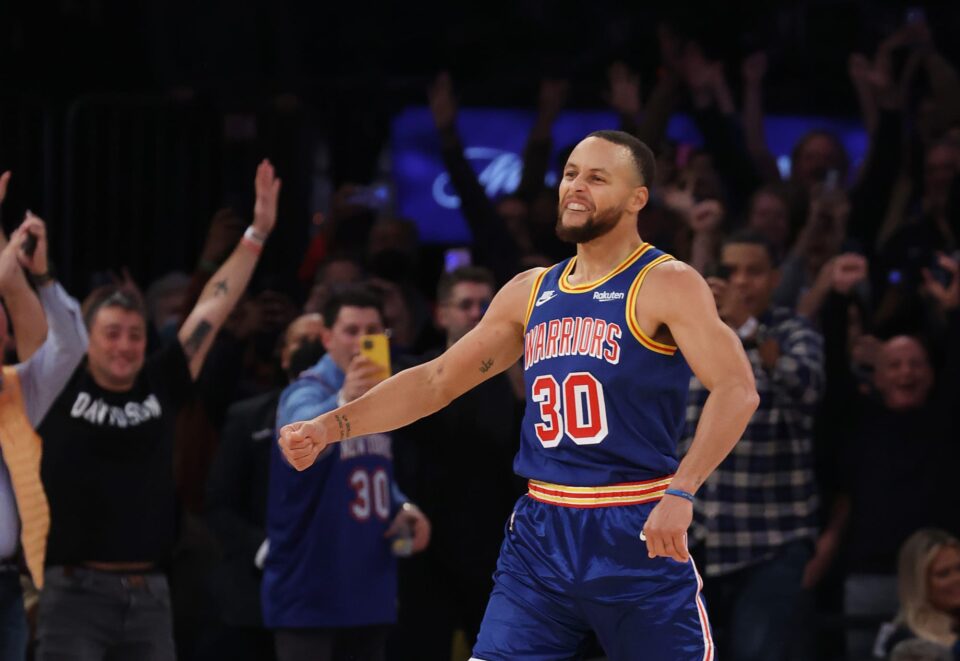 NEW YORK, NEW YORK – DECEMBER 14: Stephen Curry #30 of the Golden State Warriors celebrates after making a three point basket to break Ray Allen’s record for the most all-time against the New York Knicks during their game at Madison Square Garden on December 14, 2021 in New York City. NOTE TO USER: User expressly acknowledges and agrees that, by downloading and or using this photograph, User is consenting to the terms and conditions of the Getty Images License Agreement. (Photo by Al Bello/Getty Images)

Golden State Warriors guard Steph Curry solved his own shooting slump. We shouldn’t expect anything different from the best shooter of all-time.

Curry broke out of his shooting slump in a big way against Minnesota on Thursday night, thanks to six three-pointers. Steph looked more like the MVP frontrunner we assumed him to be earlier this season, launching shots from near-halfcourt with incredible confidence.

The 33-year-old was always aware of his self-diagnosed slump, he just didn’t know how to fix it.

“He started talking about how he wasn’t getting enough power and he’s kind of flicking balls at the top (of his shot),” Warriors assistant Bruce Fraser said, per Marcus Thompson of The Athletic (subscription required). “Especially when he was out more in range or off some movement.”

Warriors: Steph Curry fixed his own shooting slumpCurry is a mad scientist from behind the arc. Every part of his shot is calculated, from the lift to the release. So when something goes wrong, Curry is always aware of it.

That’s what made his most recent shortage so odd. On the surface, everything looked normal.

Curry, eventually, discovered the issue and self-diagnosed himself. Given his recent performances, it’s safe to say his treatment plan worked. Per Thompson, Curry made a discovery at practice:

“He had developed a habit of launching off his toes and not the balls of his feet. On his toes, he generates less power than when he gets a good push off the balls of his feet. The discovery paid immediate dividends. His shots started falling like normal in practice. The swishes came back. So did the pretty rotation on his ball. His balance corrected with the added burst. The oomph he regained behind the follow-through gave him much better control over the ball.”

There’s a reason Curry surpassed Ray Allen for the most three-pointers in the history of the NBA earlier this season. Nothing — and I mean nothing — gets past Steph Curry.