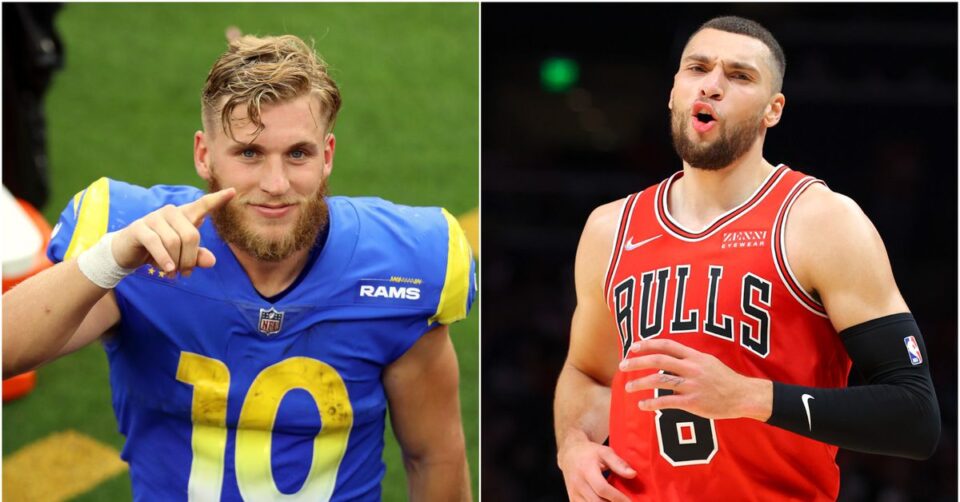 There aren’t many professional athletes who enjoyed a better 2021 than Cooper Kupp and Zach LaVine. While both Kupp and LaVine were already established in their respective sports and playing on lucrative long-term contracts, their performance over the past year has elevated both to a new tier of stardom.

Kupp already had one 1,000-yard receiving season to his name before this year, but he was mostly regarded as his team’s No. 2 WR behind Robert Woods. The Rams brought in Matthew Stafford at quarterback over the offseason, and that changed everything for Kupp. Suddenly, he was rewriting the NFL record books with arguably the greatest wide receiver season in league history: 145 catches, 1,947 yards, and 16 touchdowns.

LaVine earned his first All-Star nod last season, but he still hadn’t experienced team success since entering the NBA. Once the Chicago Bulls’ season ended, everything started trending up for LaVine: he was asked to play on Team USA’s Olympic gold squad, he saw the Bulls remake their roster with bold veteran acquisitions, and then he helped push Chicago towards the top of the East.

While Kupp’s breakout season in the NFL and LaVine’s ascent in the NBA would seem to be the only thing they have in common, they actually grew up near each other around Seattle. Reddit users dug up an old post on SB Nation Seattle that detailed a 2012 high school basketball game that pitted LaVine vs. Kupp in the state playoffs.

LaVine was big-name basketball recruit as a junior, and Kupp was a football star and solid basketball player who was still looking for a scholarship offer as a senior. Kupp’s Davis Pirates knocked off LaVine’s Bothell Cougars with the future All-Pro receiver helping lock down the future NBA All-Star. From SB Nation Seattle on March 1, 2012:

Led by a trio of seniors, the Pirates shot an impressive 65.4 percent from the field. Senior Devonte Luckett led all scorers with 23 points in an efficient 11-for-15 shooting. Seniors Cooper Kupp and David Trimble each added 19 and 13 points respectively for the Pirates. Davis used a massive 41-23 rebounding edge to stay in control and keep their lead.

Zach Lavine, considered to be the top recruit in the state, was held to four points in the first half. Bothell struggled to get any sort of offensive rhythm going throughout Thursday’s 4A quarterfinal game. Lavine finished with 20 points; most of them coming when the game was out of reach for Bothell. The Cougars were held to 32.1 percent shooting in the game.

We dug up an YouTube video of Kupp talking about the game and his matchup against LaVine. What a beautiful internet time capsule this is.

Kupp would go to play football for Eastern Washington and eventually emerge as the school’s highest draft pick ever as a third round selection in 2017. LaVine attended UCLA after high school, where he would spend one season before becoming the No. 13 pick in the 2014 NBA Draft.

Kupp and LaVine are each at the top of their respective a decade later, playing their best individual ball on teams competing for championships. You never know when the local high school matchup is going to feature two future superstars.