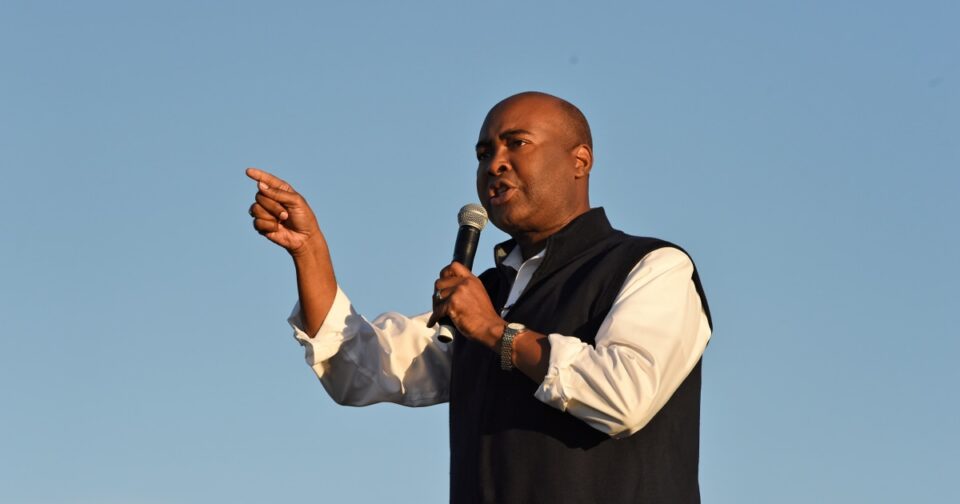 WASHINGTON — Democratic National Committee Chair Jaime Harrison is frustrated, isolated and trapped in a job he long thought he wanted, according to party insiders, a dynamic driven by escalating tensions with the White House over his role.

Key decisions for the committee are made by White House Deputy Chief of Staff Jen O’Malley Dillon, who speaks frequently with other DNC officials but only about three times a month by Zoom with Harrison. The limits of his influence are a source of agitation for Harrison, according to several people who have spoken to him.

At the same time, he’s not flying to meet with donors or visiting DNC headquarters. Instead, since he first took the post a year ago, Harrison has mostly stayed in his home state of South Carolina, according to people familiar with his schedule, as well as people who frequently see him around town. That has been a major point of consternation for the White House.

And neither the White House nor Harrison has come up with a cohesive strategy to help President Joe Biden rebound from abysmal approval ratings.

For Democrats, the tension demonstrates a troubling reality: Already bracing for a possible midterm bloodbath as the president’s approval ratings continue to plummet, there’s dysfunction at the top of the largest and most significant institution of the Democratic Party.

Harrison has been frustrated enough to consider an escape route to depart before the midterms, when Republicans are expected to make gains in Congress, according to two people with knowledge of the situation. But Harrison, who has long had his eye on running for Congress when House Majority Whip James Clyburn, D-S.C., retires, can’t make any move that would be perceived as harmful to the party or the president.

In an interview with NBC News, Harrison said he plans to serve his full four-year term, but left room for uncertainty.

“That’s my goal,” he said. “I made a commitment to the president.”

Many of them said there’s blame on both sides; the White House’s political arm is described as overbearing to a point that it isn’t empowering its chair, while Harrison is characterized as not only having demonstrated a misunderstanding of his duties but as too reluctant to travel beyond Columbia, South Carolina, where he lives with his wife and children.

“There’s blame to be shared,” said a person familiar with the dynamics who added that the White House has not been able to devise an effective political strategy or a clear message for Harrison to carry to help reverse Biden’s slide. “Has he demonstrated that he’s going to move heaven and earth to raise money and defend the administration? No. But it’s pretty impossible to defend what’s happening and not happening.”

The person described the White House’s political and communications efforts amid a series of crises and flagging poll numbers as “pretty tricky” and, using a vulgarity, in bad shape.

In the interview, Harrison urged his critics to end the gossiping and concentrate on political victory.

“My hope is that people who have time to engage in the rumor mills and this and that would actually use that energy to register a few more voters,” he said. “My focus is winning. It’s making sure that we keep the majorities in the House and the Senate. It’s not just for the Democratic Party to win, it’s because I’m legitimately scared, legitimately scared about where this country goes if we lose.”

Harrison, who ran an unsuccessful bid for the chairmanship in 2017, has expressed to others that the White House has left him out of decision-making and message steering, and that he’s not had the kind of direct contact with the president that would empower him as DNC leader.

“I think Chairman Harrison is doing the best job he possibly can, given some of the parameters in which he works,” said South Carolina Democratic Party Chair Trav Robertson, who said he didn’t want to expand on his comments at this time.

But others watching the dynamic closely say they wonder if Harrison didn’t know what he was getting into when he took the job.

Harrison assumed a role that necessitates high energy, constant phone calls, video sessions and travel, but he has instead rendered himself nearly irrelevant by rarely leaving his hometown, more than a dozen sources said. Several sources said Harrison has complained of being cut out of tasks or briefings that previous DNC chairs may have viewed as more operational and would have delegated.

His decision to stay closer to home has been a source of frustration to the White House, which would prefer him to have a more public-facing role, several people with knowledge of the dynamic said. Citing Covid and his young kids, he isn’t flying cross-country to Los Angeles or to New York to woo donors, they say.

He’s also not spending time at DNC headquarters in Washington, which is open to staff on a voluntary basis and where visits could help boost morale for those who are going into the office during the pandemic. The criticism presents a certain irony: the same Biden operation that was criticized in 2020 for not letting its chief principal travel enough is now criticizing the frequency of travel over another chief principal in the party.

Harrison’s sensitivity to protecting himself and his family from the virus was on display during a 2020 campaign debate against Sen. Lindsey Graham, R-S.C., when he brought a plexiglass divider to separate himself from his adversary. At the time, he said he wanted to ensure the safety of his wife, his children and the grandmother who helped raise him.

Still, Harrison’s critics contend it has been difficult to get him to leave the state even for big moments.

White House officials and former Virginia Gov. Terry McAuliffe had to press Harrison to attend a McAuliffe rally featuring musician Dave Matthews in October, according to two people familiar with the discussions. McAuliffe, who lost his bid for another term as governor, called Harrison personally to ask him to attend, according to a third source.

Harrison, who couldn’t find a commercial flight to get him back to South Carolina in time for a pre-existing family commitment, ended up participating in several events in Virginia before flying home on a private jet provided by Matthews, the third source said.

Before that, in August, Harrison did take part in a bus tour in Virginia, promoting Biden’s legislative priorities and McAuliffe’s candidacy.

“Jaime and the DNC were spectacular,” McAuliffe said of the effort put forth on his behalf. “They were there from Day One” and “did everything we asked them to.”

“The DNC made the largest-ever investment in the New Jersey Coordinated Campaign last election cycle, which helped not only with my re-election, but the success of many other Democratic candidates,” Murphy said in a statement. “I’ve found Jaime and the DNC to be key partners in making the investments we need to mobilize voters and win races up and down the ballot.”

The thinking among Harrison’s critics, according to one person close to the conflict, is that the chairman’s whereabouts would be much less of an issue if he were in constant virtual contact with donors. While Harrison is doing some of that work, the White House isn’t pleased with the pace, the source said — a sentiment echoed by an adviser with Biden’s political operation.

A former DNC official who is in contact both with Harrison and the White House put it this way: “He’s been marginalized — but it’s with good cause.”

Another former party official said, “You don’t hear about him. You don’t see him. There’s nothing there. He’s not out there fighting the fight.”

Still, several current and former state party chairs as well as numerous party operatives expressed deep affection for Harrison, citing longtime relationships with him and describing him as savvy and kind. They said the White House would be wise to elevate Harrison’s political know-how instead of icing him out.

They also expressed frustration with White House’s political lieutenants, describing them as absent, unresponsive and lacking the human touch needed to build support in battleground states and turn around Biden’s lagging numbers.

For Harrison, the next few months present a conundrum. The longer he remains as chair, the more likely he could be made the scapegoat if Republicans sweep in midterm elections.

“The big question is whether he gets out before the curtain comes down in November,” a Democratic Party official said.

Multiple donors expressed surprise in interviews that they had had little or no contact with Harrison. In one case, a donor noted having an encounter with Harrison and was prepared to hand over a generous check — but Harrison never asked.

At the same time, the DNC’s fundraising numbers have not suffered. Harrison defenders are quick to note that the DNC reported record fundraising for the first year after a presidential election during his initial period as chairman. The total through November, the last month reported to the Federal Election Commission, was $141 million, just under the $147 million the Republican National Committee raised over the same period.

Harrison’s fate at the DNC is a delicate subject, given Harrison’s proximity to Clyburn, the South Carolina congressman who advocated for Harrison’s DNC appointment and delivered a marquee endorsement to Biden that helped the president clinch the early primary state and go on to handily win Super Tuesday and beyond.

An adviser with Biden’s political operation did not comment on questions about the tension but said the operation viewed Harrison as vital to its strategy moving forward.

​”​We have a lot of important work left to do, which is why we want Jaime out there more, not less – more television, more campaign rallies, more fundraising,” the adviser said. “He’s an asset and we will need him out there for the work we have ahead.”

Harrison shot to national fame when he challenged Graham in 2020 and raised a staggering $57 million in one quarter, the highest quarterly total for a Senate candidate in U.S. history.

But several South Carolina Democrats complained about Harrison’s fundraising prowess before the Graham race, attributing the spree to an anti-Graham and anti-Trump enthusiasm.

Earlier this month, the White House named Harrison’s wife, Marie Boyd, to an unpaid position on the board of International Food and Agricultural Development. Boyd is an associate professor at the University of South Carolina School of Law.

A source close to Biden’s political shop noted that Harrison regularly talks with state party chairs and has acted as a keynote speaker in Democratic coalition events, most of them virtual, and cited dozens of other meetings. If there’s a criticism, the source noted, it’s that the shop wants to see Harrison do more.

But the White House has also publicly praised Harrison’s work as chair. In a Dec. 14 fundraiser, Biden himself addressed donors.

“Jaime Harrison is here and he’s doing an outstanding job as the DNC chair,” Biden said then. “The DNC has been a critical partner in all of our work this year. As Democrats, we know what we’re for, while Republicans don’t seem to be for anything. Name me something they are for. They’re against everything.”

‘Don’t look up’: Why Ukraine is playing down Russia threat as U.S. sounds the alarm