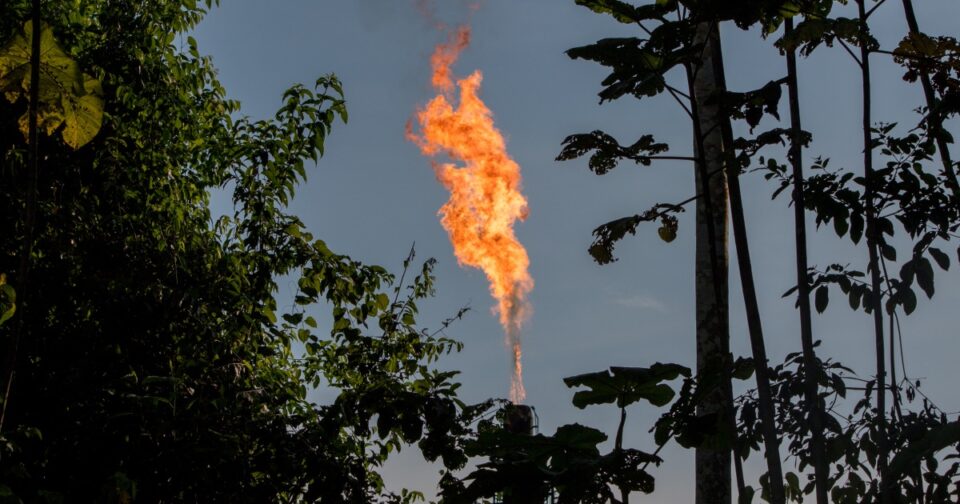 The private company that runs an oil pipeline in Ecuador’s Amazon rainforest stopped pumping oil Saturday after a rupture in the pipeline, according to a statement from the company.

Footage obtained and posted on Twitter by the Confederation of Indigenous Nationalities of Ecuador (CONAIE), an advocacy group, shows oil spraying out of the pipeline. The rupture happened Friday, and was caused by a rock fall, said OCP Ecuador, the company that operates the pipeline.

OCP Ecuador said it had “immediately initiated clean up, environmental remediation as well as repair of the pipeline in the Piedra Fina sector and implemented all the necessary actions to avoid, reduce, mitigate and repair any impact related to the OCP pipeline rupture caused by the rockslide on January 28, 2022.”

The company said it had contained spilled oil so “it cannot contaminate any bodies of water” and had stopped pumping crude until “conditions are right.”

Remedial action includes containing the spilled crude so it cannot contaminate any bodies of water.

“This is the exact reason why we oppose oil extraction,” said Andres Tapia of the Confederation of Indigenous Nationalities of the Ecuadorian Amazon, the parent organization of CONAIE. “Spills have become a part of our daily life, and we live with the contamination for decades. The oil industry has only brought us death and destruction.  … We are calling on the government to halt oil expansion plans and properly clean up this spill and all the others that continue to contaminate our territories and violate our rights.”

In a statement, Kevin Koenig, energy and climate director of the environmental group Amazon Watch, said, “This latest spill shows once again that Ecuador’s oil infrastructure is built to spill. Despite promises to use state of the art technology and alleged commitments to environmental responsibility, Ecuador is averaging two oil spills per week. … Government plans to double production and expand extraction deeper into the Amazon will only lead to more of the same.”

Both the OCP pipeline and a state-owned pipeline paused operations in December because of erosion. The pipelines burst in 2020 due to erosion, causing oil to spill into the Coca River.

Over the past 50 years, oil companies have extracted immense amounts of crude from the Amazon, causing the destruction of rainforest crucial to slowing climate change and jeopardizing the indigenous tribes who rely on it.

In 2021, NBC News and the Pulitzer Center published and broadcast stories about oil extracted from Ecuador’s Amazon rainforest. The Yasuní National Park, a 3,800-square-mile swath of forest, holds more than 1 billion barrels of oil, and is also home to one of the most diverse collections of plants and animals on the planet.

Oil from the Yasuní is brought to the OCP pipeline and then pumped to hundreds of miles to a maritime terminal. The OCP pipeline pumps about 450,000 barrels of crude per day.

“It hurts me to see the little that is left of our rainforest inside this protected area,” Nemo Guiquita, a leader of the Waorani tribe, told NBC News during a boat trip through the national park. “We should be fighting to protect our rainforest in Ecuador, but instead they are granting more oil concessions.”

On Saturday, Guiquita said, “The oil spill has reached the banks of the Coca River. The situation is critical because more than 60,000 people depend on water from this river.”

The oil extracted from Yasuní and the wider Amazon is exported around the world, but 66 percent goes to the U.S. on average and the vast majority of that to one state in particular: California, according to a report shared exclusively with NBC News.

Oil drilling in the Ecuadorian Amazon began in the 1960s with the promise of bringing prosperity to the coastal South American nation.

Ecuador’s economy soared over the next decade. But by the 1990s, the oil boom had faded, and the country entered a severe recession, resulting in a flurry of deals with foreign oil companies.

Ecuadorian President Guillermo Lasso, who took office in May 2021, has vowed to double the country’s oil production.

On its official Twitter account, Ecuador’s Ministry of the Environment said, “Due to the rupture of the heavy crude oil pipeline and the consequent oil spill in the Piedra Fina sector we have urgently and immediately ordered contingency, clean up and remediation in the affected areas.”

Christine Romo is a senior enterprise producer at NBC News.