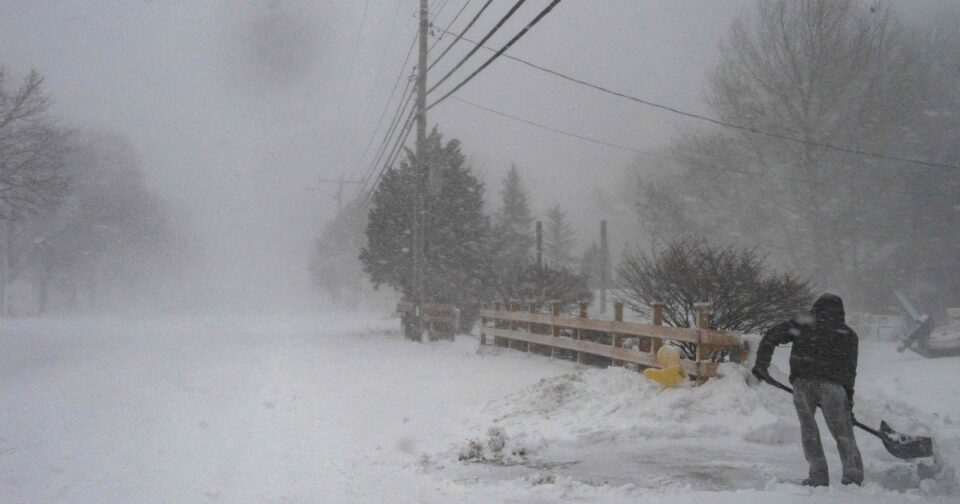 Tens of thousands of people woke up without power Sunday as the East Coast was plunged into a deep freeze after a powerful nor’easter dumped mounds of snow and flooded coastlines.

Massachusetts bore the brunt of the storm, with the town of Sharon getting more than 30 inches of snow Saturday night, the National Weather Service said in a tweet.

It was one of the worst storms to hit the East Coast in four years, with blizzard conditions recorded in several states, said NBC News meteorologist Kathryn Prociv.

Just over 60,000 households in the state were without power early Sunday, according to online tracker PowerOutage.us. At the peak of the storm on Saturday, it said as many as 100,000 had been left in the dark.

However, Massachusetts Gov. Charlie Baker warned that the clean-up would likely to continue into Monday as peak wind gusts on Saturday night would had prevented workers from fixing downed power lines.

“When the snow stops falling we’ll be dealing with the impacts of the storm for a few days,” he told a news conference late Saturday.

Urging people to stay home unless absolutely necessary, he said road conditions would “continue to be hazardous.” Interstates he said, were “especially prone to snow drifts.”

His warning came after Boston tied its record for biggest single-day snowfall on Saturday, with 23.6 inches, according to the city’s National Weather Service office.

Blizzard conditions were reached at several locations across Rhode Island and eastern Massachusetts on Saturday, it said.

Meanwhile in Maine, windy conditions will persist across the state through the afternoon on Sunday, the National Weather Service’s Weather Prediction Center said, adding that winter storm and blizzard warnings would be in effect until 7 a.m. E.T. for parts of the state.

“Very cold temperatures” will follow the nor’easter with “dangerous wind chills” into Sunday morning, it said.

Behind the storm is dangerous, bitterly cold arctic air, Prociv said. “These cold temperatures along with ongoing winds will lead to wind chills of 15-25 degrees below zero Sunday morning across interior portions of New England and New York,” she added.

The storm caused several casualties throughout the region.

In New York’s Nassau County, executive Bruce Blakeman told NBC New York that a snow plow operator found an elderly woman dead in her car overnight Friday. Although her official cause of death had not been confirmed, he said Saturday that she likely suffered a heart attack or another sudden health event.

Police in Southold Town on the northeastern tip of Long Island said in a statement Saturday a man who fell into an icy swimming pool as he shoveled snow was found unconscious by first responders and died at a hospital. The man’s name was not immediately released.

In West Islip, Suffolk County officers resuscitated a 71-year-old man who collapsed while using a snow blower. The officers performed CPR and used an AED on the man twice to regain his pulse, police said. He was in critical but stable condition at a hospital Saturday night.

Air travel was also affected throughout the region.

Hundreds of flights were canceled over the weekend at the Boston Logan International Airport.

Officials at all three airports said they were expecting a slow start to flight activity Sunday morning with a gradual increase as the day progresses.

The storm is expected to move into eastern Canada on Sunday, the National Weather Service said.