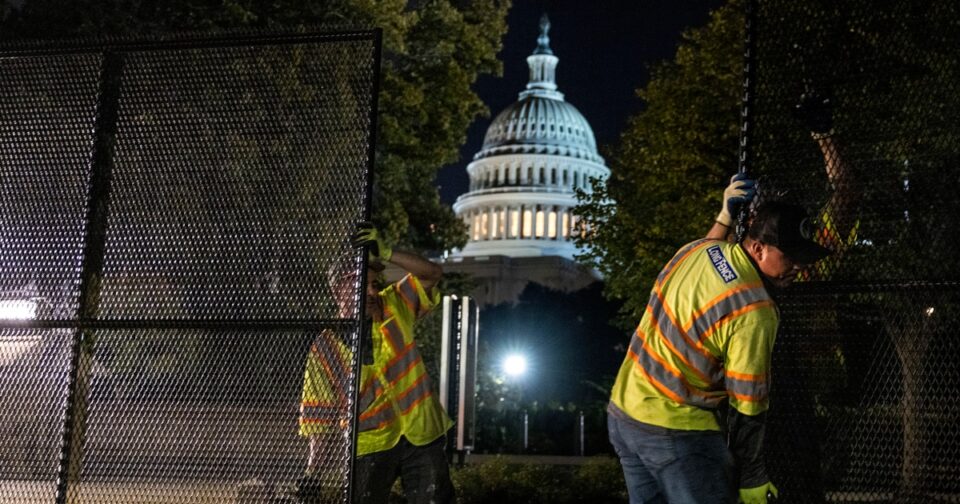 WASHINGTON D.C. — Authorities are considering reinstalling a fence around the Capitol ahead of a possible trucker convoy protest during President Joe Biden’s State of the Union next month, officials said Friday.

The fence is the same barrier that remained around the Capitol for months after the Jan. 6 riiot and during the “Justice for J6” rally.

In a statement, a Capitol Police spokesman said the agency was working closely with the Secret Service on a plan for the March 1 speech.

“The temporary inner-perimeter fence is part of those ongoing discussions and remains an option, however at this time no decision has been made,” the spokesman said.

In an earlier statement, the agency said it was working with other law enforcement agencies and the Washington D.C. National Guard.

“As with any demonstration, the USCP will facilitate lawful First Amendment activity,” the agency said.

The announcement comes as authorities in Ottawa, Ontario, began arresting “Freedom Convoy” protesters who have occupied part of the country’s capital city for weeks over Covid-19 rules and the policies of Prime Minister Justin Trudeau.

Authorities clamped down last week on a blockade that disrupted trade over the Ambassador Bridge between Detroit and Windsor, Canada, making a couple dozen arrests and seizing five vehicles.

In the United States, anti-vaccine groups, supporters of former President Donald Trump and followers of the QAnon conspiracy theory have sought to replicate the protests north of the border.

As detailed on far-right social media and chat groups — and described in a bulletin from the Department of Homeland Security — the groups had sought to block traffic during the Super Bowl in Los Angeles but were unable to organize the event in time.

The bulletin, which described the effort as “aspirational,” says the convoy planned on disrupting the football game before making its way to the capital.

The Chinese Government Claims That Its AI Can Read Minds