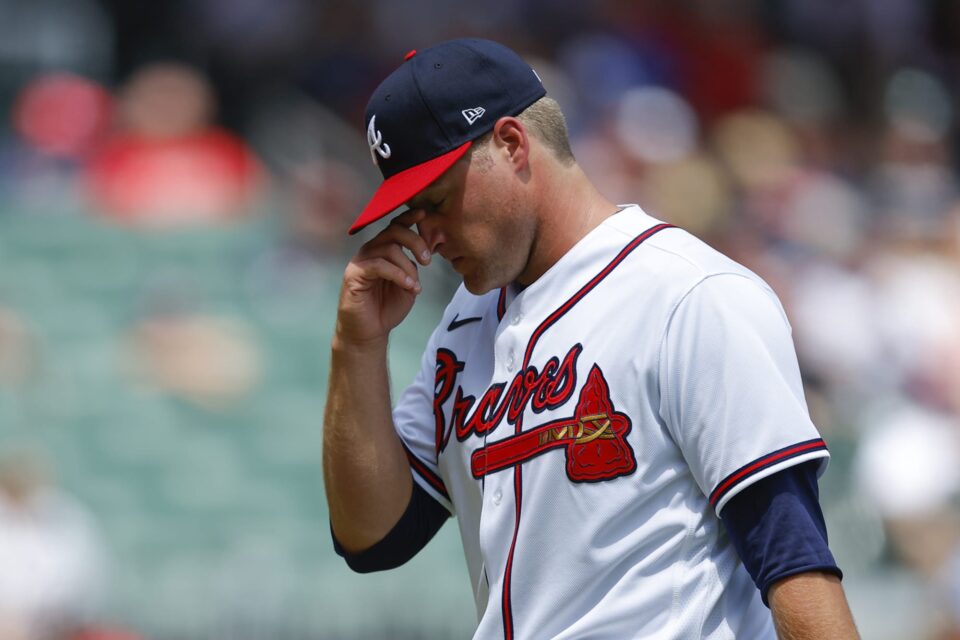 ATLANTA, GA – APRIL 24: Bryce Elder #55 of the Atlanta Braves comes out of the game during the fifth inning against the Miami Marlins at Truist Park on April 24, 2022 in Atlanta, Georgia. (Photo by Todd Kirkland/Getty Images)

These three glaring roster holes could get in the way of a World Series repeat for the Atlanta Braves.

There may not be another parade for the Atlanta Braves at the end of this season. Repeating as champions is tough enough. A slow start at the beginning of 2022 is showing the Braves may not have what it takes to make the same push they did in 2021.

The roster isn’t getting the same magic out of some key players who excelled for them last year. Add in injuries to some core players, there’s a reason why the Braves may not escape April with a winning record.

The team does have time to turn things around and we shouldn’t expect them to dive into MLB’s basement. However, these three glaring roster holes could stop the Braves from winning the World Series.

The Braves desperately need Ronald Acuna Jr. back in the outfieldRonald Acuna Jr. suffered a major season-ending injury last year and should be back sometime in early May to help the Braves. The timing couldn’t be better. The Braves aren’t getting much out of their current outfield mix.

Adam Duvall is coming off of a year where he led the National League in RBI and won a Gold Glove. The team’s starting center fielder this year, he’s not hitting well at all. Through 59 at-bats, he has yet to hit a home run and holds only a .186 batting average.

Even worse is the performance from Eddie Rosario. A postseason hero for them last year, Rosario has been dreadful at the start of 2022. He has gone 3 for his first 44. This gives him a .068 batting average which we all figured was never going to happen again with pitchers no longer hitting.

Both Duvall and Rosario appear to have given Atlanta their best runs last season. Even if Acuna Jr. does return, two big holes on the roster could remain.