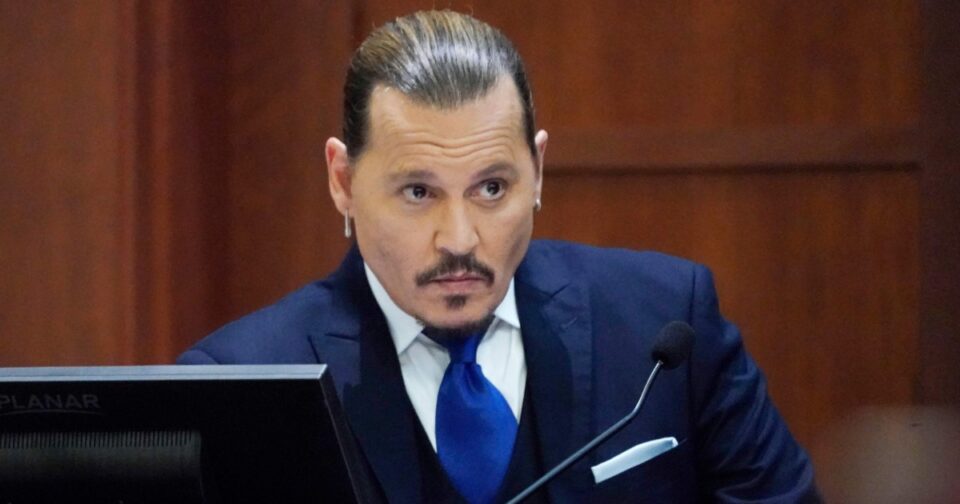 Depp is suing Heard over an essay she wrote for The Washington Post in 2018, in which she said she had become a “public figure representing domestic abuse.” Although the article never mentions Depp by name, his attorneys said it indirectly refers to allegations she made against him during their 2016 divorce.

Monday marked Depp’s fourth day on the stand in the trial, which is taking place in Fairfax County, Virginia, and is expected to go on for weeks. A Fairfax judge ruled in 2019 that Depp was within his rights to bring the case there because The Washington Post’s online editions are published through servers in the county.

In his early testimony, Depp offered his perspective on the couple’s relationship and their fights. He described Heard as having a “need for conflict.”

He told the court that she was the instigator of their arguments and occasionally escalated their fights to physical violence. Depp said he would try to placate Heard because she would sometimes “strike out,” whether it was a slap or a shove or throwing something at him.

“It’s hard to explain but the argument would start here but it would roll around and become this circular thing of its own,” Depp said. “You’d get back to the beginning … now it’s heightened even more and it’s still circular. There’s no way in or out.”

Heard has not yet testified in the trial but her attorneys cross-examined Depp, displaying his own text messages in an attempt to undermine his characterization of the couple’s time together.

Depp’s text messages highlighted times he used violent language and spotlight moments when he seemed to admit to a need to stop abusing alcohol. Heard’s legal team presented text messages Depp sent in 2013 that said he would subject her a violent death and then violate her corpse afterward.

Heard’s team spent Monday morning playing audio recordings of the couple’s fights, some of which included Depp hurling expletives at Heard. In some recordings, Heard appears to confront Depp for allegedly assaulting her.

“You throw a swing when you can, when better than I’m on the floor. Cause that’s when it’s really good to hit someone,” Heard said in one recording.

A tape was played for a jury during Depp’s defamation trial against Heard last week just before the court adjourned for the weekend. In it, Heard can be heard begging Depp to “put the knife down.”

“It would be the worst thing in the world to use to cut me. It would be too painful and dull and dirty to use,” Heard said in the recording. Later she says, “please don’t cut yourself.”

Depp was given little opportunity to respond during the cross, often only able to respond to “yes or no” questions as to whether Heard’s attorney recounted messages correctly or to confirm statements made by her lawyer.

After the cross-examination ended, Depp’s attorneys were given a chance to question him again. In reference to the violent messages he sent in 2013, Depp described them as private jokes between himself and a friend.

“None of it was ever intended to be real,” Depp said. “And as for the language that was used, yes I am ashamed … for example the text about burning Ms. Heard is directly from Monty Python…It’s just irreverent and abstract humor.”

The scene Depp refers to comes from “Monty Python and the Holy Grail,” in which a village is attempting to drown and burn a woman for being a witch, but a guard points out their illogical reasoning.

Heard was granted a protective order in May 2016 after she alleged that Depp hit her in the face with a cellphone. She presented evidence to the court — a photo of a bruise to her face — and claimed he pulled her hair, screamed at her and hit her repeatedly.

“During the entirety of our relationship, Johnny Depp has been verbally and physically abusive to me,” Heard said in a sworn declaration at the time.

She also said she lived in fear of Depp, saying he had a “short fuse” and terrorized her.

Depp testified that his typical tactic in arguments was to remove himself, often by locking himself in a bathroom. He said it was a strategy he learned growing up with an abusive mother.

Depp, who has denied ever having struck Heard, recounted his version of the May 2016 cellphone incident last week.

Depp said the two were in his penthouse a day after he called Heard to tell her that his mother had died and that he wanted to file for divorce.

Heard wanted to speak, Depp said, so he went over to have a discussion and gather his belongings. They had not spoken for nearly a month at that point, he said.

Depp said Heard laughed at him with a friend on the phone as he gathered his belongings.

“It was a tough couple of days, and I really didn’t feel like I deserved that kind of treatment,” Depp said.

He took the phone, told her friend that Heard was “all yours” and then “flung” it down onto the couch before he walked away to the kitchen, Depp told the court.

Depp said that he lost “nothing less than everything” when Heard wrote her essay in The Washington Post, though her attorneys pushed back Monday and focused on Heard’s experience after she filed for a restraining order in 2016.