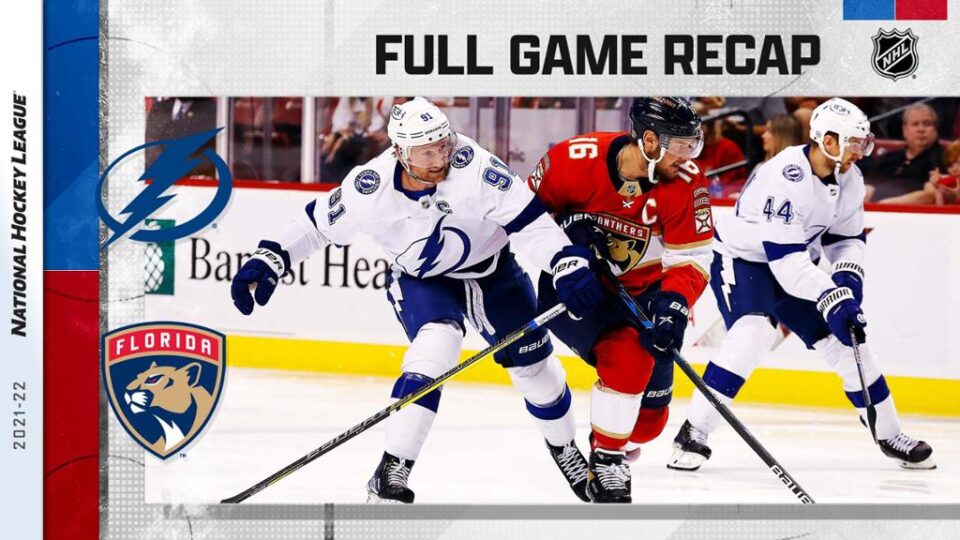 The Panthers, who set their record with a 3-2 overtime victory against the Toronto Maple Leafs on Sunday, lost for the first time since March 27.

“Tonight we were pushing again and you can only go to the well so many times and tonight it ran out,” Panthers coach Andrew Brunette said. “There’s some things that we’ve got to shore up absolutely, but I love the way our group competes even [on] a night where you can take it off. We did not take the night off.”

Nicholas Paul scored two second-period goals, Steven Stamkos had two goals and two assists, and Victor Hedman had four assists for the Lightning (49-22-8), who have won three in a row. Andrei Vasilevskiy made 37 saves.

Sam Reinhart scored two goals for the Panthers (57-16-6). Spencer Knight made 12 saves but was pulled in the second period after Paul’s second goal made it 5-3. Sergei Bobrovsky replaced Knight and made 12 saves.

Florida, which has clinched the top seed in the Eastern Conference, stayed four points ahead of the Colorado Avalanche in the race for the President’s Trophy and the No. 1 seed in the NHL. Tampa Bay is in third place in the Atlantic Division, five points behind the second-place Toronto Maple Leafs and three points ahead of the Boston Bruins.

Paul gave Tampa Bay a 4-3 lead with a shorthanded goal when he put the puck between his legs before flicking it past Knight.

“We knew the streak they were on,” Paul said. “And we wanted to come here and be the ones that ended it.”

Brayden Point made it 6-3 with a power-play goal at 3:34 of the third period.

Reinhart brought Florida to within 6-4 at 7:04 with a power-play goal.

“The playoffs are like on steroids to what we saw tonight,” Lightning coach Jon Cooper said. “You’ve got to be ready and games like this help you.”

Kucherov gave Tampa Bay a 1-0 with a high wrist shot from the bottom of the right circle.

After Claude Giroux had a goal disallowed at 4:06 when Tampa Bay successful challenged for goaltender interference, Reinhart made it 1-1 at 4:31 with a quick shot from the high slot for his 30th goal of the season.

Video: TBL@FLA: Stamkos one-times feed from up top for lead

Brandon Montour, who scored in overtime in the Panthers’ 3-2 victory against the Maple Leafs on Saturday, cut the margin to 3-2 at 17:28 when he one-timed a clearing attempt off the boards.

Mason Marchment tied the score 3-3 at 59 seconds of the second period with a one-handed backhand flip of a bouncing puck after Giroux lobbed the puck into the offensive zone.

“We’ve got a lot of competitors in here,” Marchment said. “I don’t think we ever want to lose I don’t think anyone’s ever happy with losing, especially in this locker room. I think for us just put this one behind us and move on to the next.”

NOTES: The Lightning, the two-time defending Stanley Cup champions, were flying from South Florida to Washington to visit the White House on Monday. … Stamkos became the first Tampa Bay player with four consecutive games with at least three points. … Kucherov extended his goal streak to six games, two shy of the Lightning record set by Brian Bradley in 1992-93. … Reinhart became the fourth Panthers players to reach 30 goals this season, joining Aleksander Barkov, Anthony Duclair and Jonathan Huberdeau. … Huberdeau had one assist to move to 114 points on the season, four behind Connor McDavid for the NHL lead.

AI and low/no code: What they can and can’t do together