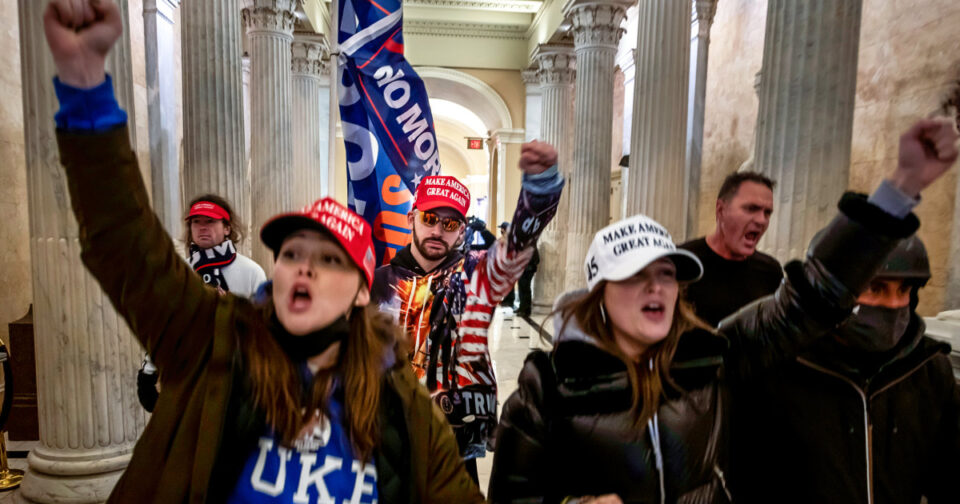 WASHINGTON — Women played a front-facing role in the Jan. 6 attack in ways that “represented a break from the norm among right-wing extremists,” who have typically relegated women to subordinate positions, extremism researchers say in a new report.

The report from the Program on Extremism at George Washington University, first shared with NBC News, explores the role women played in the attack on Jan. 6, 2021. Nearly 800 defendants have been charged in connection with the attack, with hundreds more cases in the works.

The report says women have a “long history in helping to mainstream far-right ideology,” noting the role they played in the re-emergence of the Ku Klux Klan in the 1960s. But the report also says the role of women has “shifted” in recent years, especially given the role social media has played in right-wing extremism.

“Social media has given women new on-ramps and ways of acting as spokespeople for far-right groups, often making their messaging more palatable to mainstream audiences,” the report says. “While social media has not radically re-written women’s roles in these groups — it has given women affiliated with these far-right ideologies a new platform to leverage in support of their cause.”

The researchers also dived into the role gender has played in sentencing, as attorneys for female Jan. 6 defendants have “articulated narratives emphasizing their clients’ naivety, vulnerability, and traditionally feminine roles.”

Hilary Matfess, an assistant professor of political science at the University of Denver, who co-authored the report with Devorah Margolin, the director of strategic initiatives for the Program on Extremism at George Washington University, said one of the most fascinating things they found was the “gap” between female Jan. 6 defendants’ social media posts and how they portray themselves in court, noting how many “again and again and again” downplayed their culpability by emphasizing their roles as mothers, daughters and caregivers.

“One thing that comes out in so many of these historical case studies that we tried to unpack a bit in this report is the role that women play in laundering some of these ideas into the mainstream and giving right-wing extremism or white supremacy a friendlier face,” Matfess said. “Women have served to soften the image of these groups, either to recruit or to be a friendly face for extremist ideology.”

Women have been among the most prominent Jan. 6 defendants. There was Rachel Powell, the mother of eight from Pennsylvania who was alleged to have been caught on video directing rioters with a bullhorn and using a battering ram to smash out a window. There was Beverly Hills, California, cosmetologist Gina Bisignano, who has pleaded guilty in relation to her use of a bullhorn to call for “strong, angry patriots” to help fight police. Jenna Ryan, a Texas real estate agent who flew to Washington on a private plane and compared her treatment to that of “the Jews in Germany” during the Holocaust, was sentenced to 60 days in federal prison. And there was Dawn Bancroft, the mother and former CrossFit gym owner who pleaded guilty to a misdemeanor and admitted recording herself saying she wanted to “shoot” House Speaker Nancy Pelosi, D-Calif., “in the friggin’ brain.”

There was also Ashli Babbitt, whom Capitol Police fatally shot as she climbed through a broken window while nearby members of the House were fleeing the mob. The report notes that Babbitt, a military veteran and QAnon believer, has become somewhat of a hero on the right, held up as a victim of the government.

“In the months since January 6th, Babbitt has been portrayed by far-right extremists as a Vicki Weaver-esque martyr — a visceral demonstration of the so-called threat that the supposed state overreach presents,” the report says, referring to the killing of Vicki Weaver at the government siege in Ruby Ridge, Idaho, in 1992.

Female Jan. 6 defendants have also leveraged their gender in their criminal cases, the report found. Defense attorneys “often emphasize their clients’ performance of traditional gender roles and norms,” including by “drawing attention to their clients’ responsibility for care work (including their roles as mothers and wives) and their compassion.”

Matfess, the report co-author, said it is important that researchers stop “rediscovering the wheel” about the role women play in right-wing extremism to get a better understanding of both Jan. 6 and the operations of extremist organizations.

Weary of many disasters? U.N. says worse to come