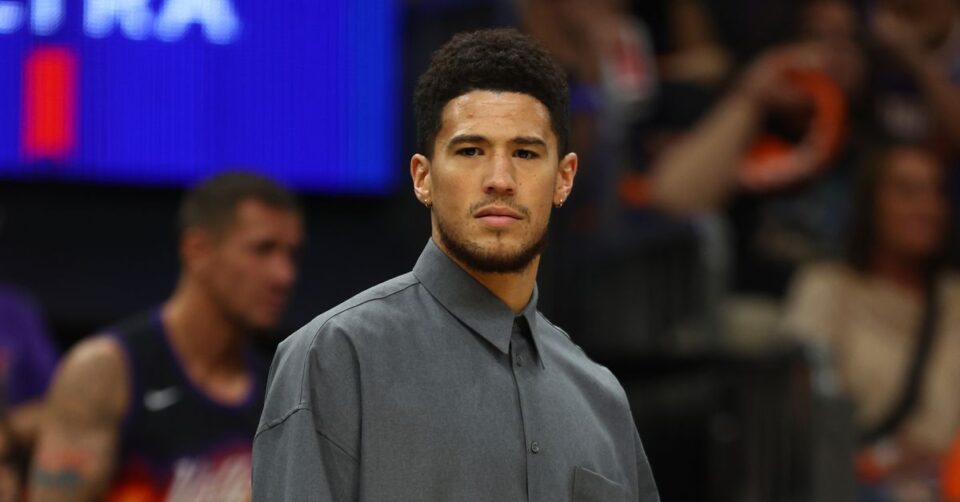 Devin Booker could return for the Phoenix Suns in Game 6 or a potential Game 7 of their first round series against the New Orleans Pelicans. Booker is initially expected to be listed as out for Game 6 as he works his way through a hamstring strain, but there’s optimism he’ll be back in the Phoenix lineup soon, according to ESPN’s Adrian Wojnarowski.

Booker left with right hamstring tightness midway through the third quarter of Game 2 in the Phoenix Suns’ first round series with the New Orleans Pelicans in the 2022 NBA Playoffs. Without Booker for much of the second half, the Pelicans stunned the Suns to earn a shocking 125-114 win that evens the series at 1-1.

Booker has been out since. The initial MRI stated that Booker has a Grade 1 hamstring strain and could miss 2-3 weeks.

The Suns can advance to round two with one more win against the Pelicans. Phoenix leads the series 3-2. Per Woj, Booker will return on a minutes limit when he does come back.

Booker was on fire to start the game, scoring 31 points in the first half and even dapping up a courtside baby after one difficult make. Booker’s heroics were the reason the Suns led by five entering halftime, but New Orleans quickly proved it wasn’t going away.

With just under five minutes left in the third quarter, the Pelicans pulled in a defensive rebound and fired a pass down court to Jaxson Hayes. Booker chased Hayes on the break but pulled up with a limp as the Pelicans forward dunked the ball. He checked out of the game and didn’t come back in. Here’s the play.

NBA insider Shams Charania confirmed that Booker would be out for the night before the Pelicans secured the win. For now, the team is calling it right hamstring tightness.

Suns’ Devin Booker has right hamstring tightness and is out for remainder of Game 2 vs. Pelicans.

There is not yet a timetable for Booker’s return. The Suns are traveling to New Orleans on Wednesday ahead of Game 3. Booker will get an MRI shortly.

Booker was incredible before the injury, connecting on seven three-pointers in the first half.

With seven threes, Book matched his own postseason record for threes in a half and recorded the 4th instance by a Suns player with 30+ points in a half. pic.twitter.com/BtuKVTx1yP

This isn’t Booker’s first hamstring injury this season. He injured his left hamstring in late Nov. and missed seven games. The Suns went 5-2 over that stretch. Booker has experienced multiple hamstring injuries dating back to Oct. 2018.

Game 3 isn’t until Friday, with Game 4 scheduled for Sunday, both in New Orleans. The Suns will still be expected to win the series even without Booker, but it won’t be easy. The Pelicans proved how tough they are with this Game 2 win.

When will Devin Booker return from injury in the 2022 NBA Playoffs?
It sounds like it’s likely to happen in round two, or possibly sooner. This is great news.

Kamaru Usman, Canelo Alvarez trade shots after ‘Who the f*** is this?’ jab at UFC champ’s manager

Canucks eliminated from playoff contention due to poor start, injuries