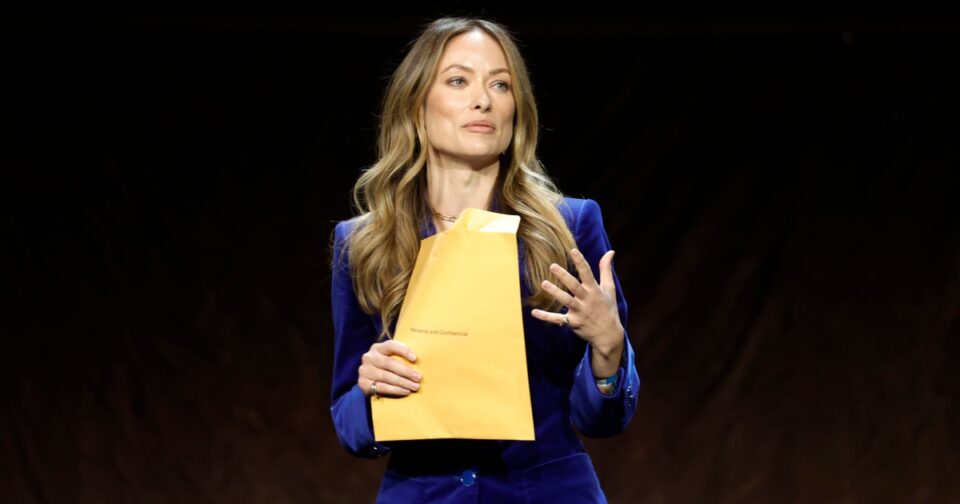 Olivia Wilde was served papers regarding her children during an appearance Tuesday at CinemaCon in Las Vegas.

Sources close to “Ted Lasso” star Jason Sudeikis said by email that “papers were drawn up to establish jurisdiction relating to the children of Ms. Wilde and Mr. Sudeikis.”

The source added, “Mr. Sudeikis had no prior knowledge of the time or place that the envelope would have been delivered as this would solely be up to the process service company involved and he would never condone her being served in such an inappropriate manner.”

Representatives for Wilde did not immediately respond to a request for comment.

Wilde and Sudeikis broke up in November 2020 after nine years together. The actors share two children: Otis, 8, and Daisy, 5.

Wilde was presenting the trailer for her new film, “Don’t Worry Darling,” at the Las Vegas convention when a manila envelope labeled “personal and confidential” was given to her by someone in the front of the stage, Variety reported.

The head of CinemaCon, Mitch Neuhauser, the managing director of the National Association of Theatre Owners, said in a statement that organizers will re-evaluate their security protocols.

“We have never in the history of the convention had an incident where a delegate has approached the stage who was not authorized to be there,” Neuhauser said. “In light of this incident, we are reevaluating our security procedures to ensure the safety of all our attendees.”

Wilde and Sudeikis have not publicly commented on the matter. Wilde, however, did post a still image on her Instagram account of the coming movie she directed, which stars her boyfriend, Harry Styles, and Florence Pugh.