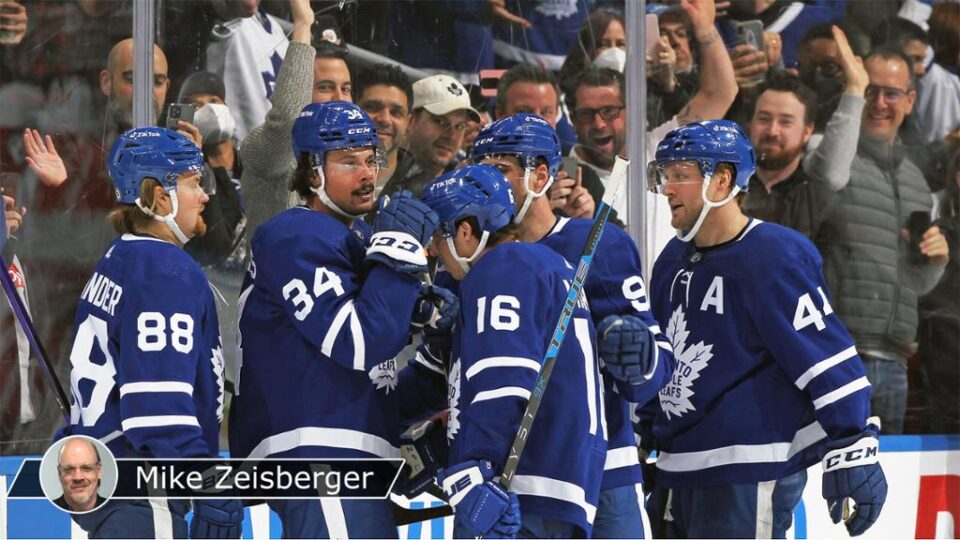 TORONTO — The Toronto Maple Leafs were all smiles when they gathered for the official 2021-22 team photo on the Scotiabank Arena ice Wednesday. With Auston Matthews having scored his 60th goal of the season when Toronto clinched home ice for the first round of the Stanley Cup Playoffs with a 3-0 win against the Detroit Red Wings 15 hours earlier, there was plenty of reason to be jovial.

But here’s the reality of the situation: If the Maple Leafs stumble in the early stages of the postseason yet again, one of the greatest regular seasons in their nearly 105-year history, for individual players and the team itself, will end will a dour mood.

“All the accolades come when the team is doing well. Like, you get individual awards and stuff in the regular season, and it’s great. But come playoff time those things don’t mean much,” defenseman Jake Muzzin said with a knowing chuckle.

“It’s a new season, really, and we’ve got to start breaking records in [the] playoffs I guess, so to speak. So it’s take it day by day, get ready for Game 1 and go from there.”

After closing out their regular season against the Boston Bruins on Friday, the Maple Leafs will play Game 1 of the Eastern Conference First Round at home having clinched second place in the Atlantic Division. They will face the two-time defending Stanley Cup champion Tampa Bay Lightning or the Bruins, who reached the Stanley Cup Final in 2019.

Either way, playoff experience and success will not be on their side.

Muzzin and forward Kyle Clifford are the only members of the Maple Leafs who have won the Stanley Cup, with the Los Angeles Kings (Muzzin in 2014, Clifford in 2012 and 2014). As such, Muzzin understands the grind, the energy and the sweat it takes to endure in the postseason.

The majority of his teammates cannot make that claim.

Since 2016-17, the Maple Leafs, with a core of forwards Matthews, Mitchell Marner, William Nylander and defenseman Morgan Rielly, have qualified for the Stanley Cup Playoffs each season and failed to win a series. Last season, Toronto they blew a 3-1 lead in the best-of-7 first round to the rival Montreal Canadiens, who went on to reach the Cup Final.

Each time, the season ended with a gloomy locker room with players wondering what happened.

Toronto’s playoff stumbles run much longer than that. The Maple Leafs have not won a playoff series in 18 years since defeating the Ottawa Senators in seven games in the 2004 Eastern Conference Quarterfinals.

For perspective regarding that drought, consider this: Back then the center-ice red line was still being used to monitor two-line offside passes.

Or this: Ed Belfour was the Maple Leafs’ starting goalie in the series against the Senators. He retired in 2008 and was inducted into the Hockey Hall of Fame in 2011.

Still, these Maple Leafs have a lot to be optimistic about.

Toronto set its single-season records for most points (113) and victories (53), and scored 300 goals for the first time in 32 years; it has 307 through 81 games. Matthews, a center, scored the most goals by a Toronto player in a single season and became the first United States-born player in NHL history to score 60 in a season. Marner, a right wing, set a Maple Leafs record for assists by a wing with (he has 62 with one game remaining).

Another one-and-done come playoff time, and it will have been all for naught, at least in the short term. At least some of the core players have bounced back to have a career season after the gut-wrenching elimination against the Canadiens.

“I think that’s what we all strive for is to grow and get better,” Matthews said. “We can use some extra motivation from past losses and stuff like that. That is the goal every year, whether as an individual or as a team, is to get better and be the best version of yourself you can be every day, and just kind of go from there.

“I think we all recognize that, but the team success comes first. What we’re trying to build and grow into with playoff time here into the spring, I think that’s the goal we’ve all been trying to work towards.”

Coach Sheldon Keefe, who replaced Mike Babcock on Nov. 20, 2019, has never coached Toronto for a playoff game with a full house in attendance at Scotiabank Arena because of COVID-19 regulations that limited capacity. Though he is looking forward to seeing fans in the stands for Game 1 next week, he understands that the regular-season accomplishments of his players carry little to no weight once the postseason begins.

“The actual achievements themselves, the milestones, when the playoffs start, everybody’s going back to zero,” Keefe said. “So from that end of it I don’t think they necessarily have a whole lot of emphasis or matter a great deal.

“The big thing I would say, though, is we want our players feeling good and confident and all that. To that end our players, almost to a man, we’ve had guys having career years here offensively and defensively, whatever it might be. So from that end, and for that part of it, we’re feeling good and our guys have lots of reasons to be positive going into the playoffs.”

So, for that matter, does Keefe, who was beaming with pride during the photo shoot Wednesday.

“It’s special to be able to coach the Leafs, no matter what the team behind you has accomplished,” he said. “It’s a special thing, but this group, in particular, has given me lots of reason to be proud of the work they put in. To get to this point, in my opinion, in the most competitive division in the NHL and go into the first round of the playoffs with home-ice advantage, is a testament to the work that the group has put in.

“So it’s nice to sit there. But, you know, we’d like to have another team photo when this is all said and done with some trophies.”

Winning a postseason series for the first time in almost two decades would be a good start.

Canucks eliminated from playoff contention due to poor start, injuries

Brain fog, other long Covid symptoms can last more than a year