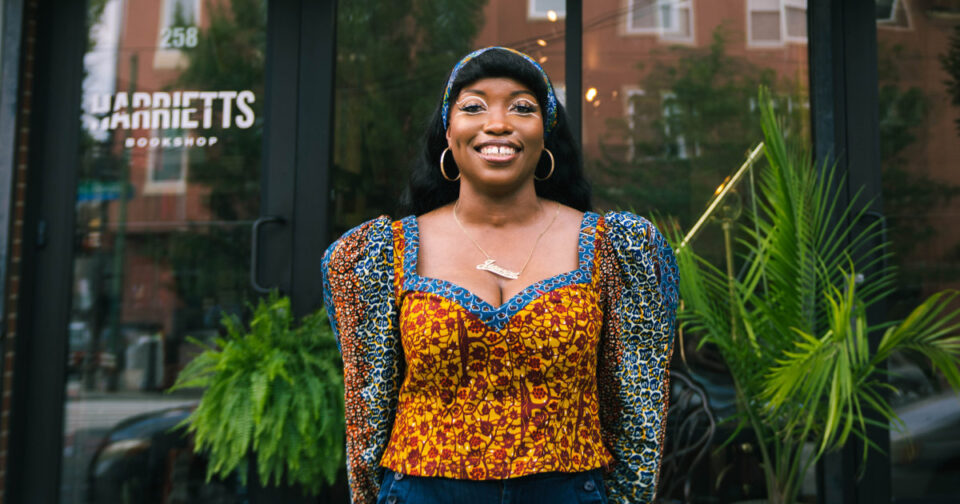 Jeannine Cook has been fascinated with Harriet Tubman ever since she picked up a book about the abolitionist in her school library as a child.

Cook, 38, learned everything she could about Tubman’s life and how she led over 100 enslaved people to freedom before serving in the Union Army during the Civil War. In Tubman, Cook saw the embodiment of what women, Black people and people with disabilities could achieve at a time when equal rights for all had not yet entered the American lexicon.

In February 2020, just before the pandemic hit, Cook opened Harriett’s Bookshop, a Philadelphia bookstore named after Tubman that sells books by female authors.

Now seeking to honor Tubman on a grander scale, Cook is campaigning to make her the first American woman to be honored with a federal holiday. Cook has collected more than 7,800 signatures on a petition calling for the designation, and she distributes blank postcards in her bookstore that customers can use to write their representatives in support of the effort.

At least one politician has taken notice. Last month, Rep. Brendan Boyle, D-Pa., introduced a bill in the House that would establish Harriet Tubman Day as a federal holiday sometime after Presidents Day.

Boyle did not immediately respond to a request for comment, but he said in a news release last month, “Our federal holidays must be a mirror of the American experience while at the same time reflecting our country’s history and diversity.”

In 1990, President George H.W. Bush proclaimed March 10 Harriet Tubman Day after Congress passed a resolution calling for its establishment. Still, it wasn’t made a federal holiday, and Cook and other supporters say Tubman’s life and legacy deserve a higher level of national recognition.

“It’s the multifacetedness of Harriet that I find so extraordinary,” Cook said. “There were so many ways she, I believe, exemplifies how to take the worst of what society has offered and to transmutate that into an immense amount of power — not for yourself, but for the people around you.”

Tubman was born enslaved on the Eastern Shore of Maryland in late February or early March 1822, according to Kate Clifford Larson, author of the 2004 biography “Bound for the Promised Land: Harriet Tubman: Portrait of an American Hero.” When she was about 13 years old, Tubman sustained a head injury after an overseer hit her with an iron weight, causing her to suffer from headaches and seizures for the rest of her life, context that makes her achievements all the more significant, Clifford Larson said.

“It’s remarkable that she survived and she was able to accomplish the things we all know. … This is a disabled woman who really achieved amazing things,” she said.

With the help of the Underground Railroad, a network of activists who helped enslaved people flee the South, Tubman escaped bondage in 1849, when she was 27 years old, after the person who owned her died, Clifford Larson said.

But after Tubman reached Philadelphia, “she basically did not feel completely free, because her mother, her father, her brothers and sisters, everyone she loved was still in Maryland, and they were not free,” Clifford Larson said.

Over the next decade, Tubman returned to Maryland to lead 60 to 70 slaves to the North in 13 separate expeditions. The groups included her parents, brothers, nieces and nephews, according to Clifford Larson. She also gave directions and guidance to about 70 more people who found paths to freedom on their own, Clifford Lawson said.

Tubman’s treks came with extreme risks heightened after the 1850 passage of the Fugitive Slave Act, which compelled citizens to assist in capturing enslaved people who escaped, among other measures.

“It was very dangerous. People were betrayed all the time on the Underground Railroad,” Clifford Larson said. “So she had to take people that she could trust and that she loved.”

Tubman attributed her success on the journeys to guidance from God, according to Clifford Larson, who added that her “brilliant mind” also helped her shepherd dozens of people to freedom while avoiding capture and death.

“She could not read or write English texts, but … she could remember everything,” Clifford Larson said. “She knew how to read the night sky because she grew up in a maritime community … so she knew how to follow the North Star or any other constellations that could help her travel.”

After her last journey to Maryland in 1860, Tubman continued to help free enslaved people, serving as a spy, scout and nurse in the Union Army. In June 1863, she became the first woman to lead a major military operation at the Combahee Ferry Raid, where she and 150 African American Union soldiers freed more than 700 slaves, according to Clifford Larson.

In the decades that followed, until her death in 1913, Tubman became active in the women’s suffrage movement and established a nursing home for African Americans on her property in Auburn, New York.

An ongoing fight for recognition

Despite her accomplishments, Tubman “continued to be overlooked” throughout the 20th century, said Clifford Larson, who was inspired to undertake her biography of Tubman when her daughter brought home a children’s book about the abolitionist in the 1990s. Clifford Larson, who was then in graduate school for women’s history, started digging and learned the last biography on Tubman had been published in the 1940s.

“There were so many children’s books published about her, but no serious scholarship,” she said.

But a yearslong effort to replace President Andrew Jackson’s likeness on the $20 bill with Tubman’s has been repeatedly stalled since the Treasury Department first confirmed the change in 2016. Last month, Treasury Secretary Janet Yellen told The Washington Post that Tubman will not appear on the bill until 2030 because of all the steps, including updating anti-counterfeiting technology, which is required to design and produce new currency.

Barbara Ortiz Howard, founder of Women on 20s, an organization working to get notable women on U.S. currency, said she believes “it’s easier to create a holiday than it is to change the currency.”

Only five federal holidays have been established in the past century, according to the Congressional Research Service, and at least one attempt to create one for a woman failed. Rep. Carolyn Maloney, D-N.Y., introduced a bill in 2011 calling for a federal holiday honoring suffragist Susan B. Anthony, but it died in the House Oversight and Reform Committee, the same committee to which Tubman’s bill was referred after its introduction last month.

The bill currently has five Democratic co-sponsors and would need to pass the House and Senate and be signed into law by the president before a federal holiday could be established.

Cook, the bookstore owner, said she remains hopeful and believes a federal holiday for Tubman could bolster the call for reparations for descendants of enslaved people.

“It could be a day that supports us with how to mourn the tragedy that slavery was,” she said, “and how to focus on repairing that harm.”

Sea urchins are mysteriously dying off across the Caribbean, scientists say

Federal team to investigate Tesla crash that killed 3 in California

US Drug Overdose Deaths Top 100,000 for the First Time