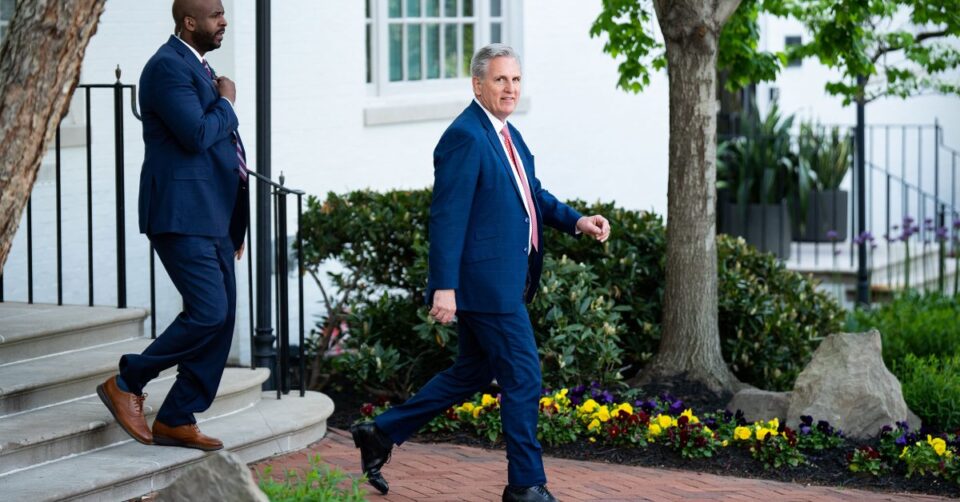 This article is part of The D.C. Brief, TIME’s politics newsletter. Sign up here to get stories like this sent to your inbox.

Republican Leader Kevin McCarthy may have ridden the last hellish week as best as he could have hoped. First, he got called out by his colleagues for slamming then-President Donald Trump’s role in inflaming the Jan. 6 riot in a phone call made days after the attack, which was published by New York Times reporters. He then suggested some members of his conference shouldn’t be allowed on social media platforms. And on yet another recording revealed by the New York Times, he suggested some of his own nominal allies in the Republican Party had used rhetoric that may have endangered people on Jan. 6.

In short: McCarthy, the heir apparent to lead the House if Republicans take back the majority, isn’t quite the shoo-in that he was six months ago. But his colleagues haven’t entirely abandoned him. Yet.

House Republicans have been playing nice in recent days, despite the stunning revelations from two New York Times reporters’ forthcoming book about the last gasps of Donald Trump’s presidency. Lawmakers have dodged questions and blamed journalists for the discord, although most are careful not to explicitly defend McCarthy. The GOP rank-and-file has been looking at McCarthy with a skeptical eye as the likeliest successor to Speaker Nancy Pelosi should Republicans retake the majority in the midterms, gauging whether he actually shares their views and fealty to Trump. These tapes don’t help his case.

Still, McCarthy hasn’t been tanked by his fellow Republicans. The signals from Trump suggest that McCarthy remains copacetic with the Mar-a-Lago circuit. The MAGA crowd doesn’t seem to have been enraged by the betrayal, and McCarthy has continued churning through fundraising calls without any hint of resistance from the party’s loyalists. The GOP seems on a glide path to win at least enough seats in November’s elections to overtake the Democrats’ razor-thin margin.

The apparent loyalty may be because, by and large, McCarthy’s conference likes him. McCarthy recruited much of the Tea Party class of 2010, not out of any particular affinity for the individuals but out of opportunism. He saw the likes of the anti-Washington candidates as reliable votes in his favor for his climb to power. The burn-it-down caucus eventually ousted his partners and allies Eric Cantor, Paul Ryan, and John Boenher. But McCarthy had a direct line to the troublemakers from 2010 and onward, and he has done everything possible to coddle them and their successors in Congress in pursuit of his ultimate goal: the Speaker’s gavel.

But here’s the problem with that naked ambition: math. In practice, the Speaker needs the majority support of the winning party. And very real threats to McCarthy’s coalition remain. If Republicans have a blow-out victory along the lines of 2010’s Tea Party win or Democrats’ 2016 anti-Bush wave, McCarthy is probably safe. But if it’s a close election season, McCarthy could be denied the Speaker slot with a few defections from the likes of Matt Gaetz, Marjorie Taylor Greene, Madison Cawthorn, and Lauren Boebert—a cohort of Trumpist lawmakers who have each been summoned to his office for a stern talking-to.

Then, there’s the secondary question: will Fox News scuttle his changes? The channel’s hosts have been hunting McCarthy in the last few days, claiming he’s a puppet of the Democratic Party and a proxy for liberal ambitions, leading some viewers to wonder if it’s a chicken-and-egg scenario: whether Trump is privately gunning for McCarthy, or if the network will prod Trump to eventually turn on one of his own. It’s been well-established that the symbiosis between the network and Trump drove national policy during Trump’s four years in office, and McCarthy’s fate may hinge on the less-than-subtle messaging coming from the nation’s leading cable channel.

Ultimately, McCarthy’s Republicans will have to run 435 different races from campaigns in Madawaska, Maine, to Manawaiopuna Falls, Hawaii. Democrats could defend their majority, and Republican infighting could still defy the historical pattern that suggests they’ll take the majority. The real drama unfolding in Washington has to do with whether McCarthy treats his future as a crystal ball or a shaky Magic 8 Ball; just how much of the GOP’s prospects are preordained, and how much actually are in play? As it stands, it’s a coin-toss for McCarthy.

Make sense of what matters in Washington. Sign up for the D.C. Brief newsletter.

NFT traders STEPN to a new groove — Is move-to-earn the future of fitness or another fad?