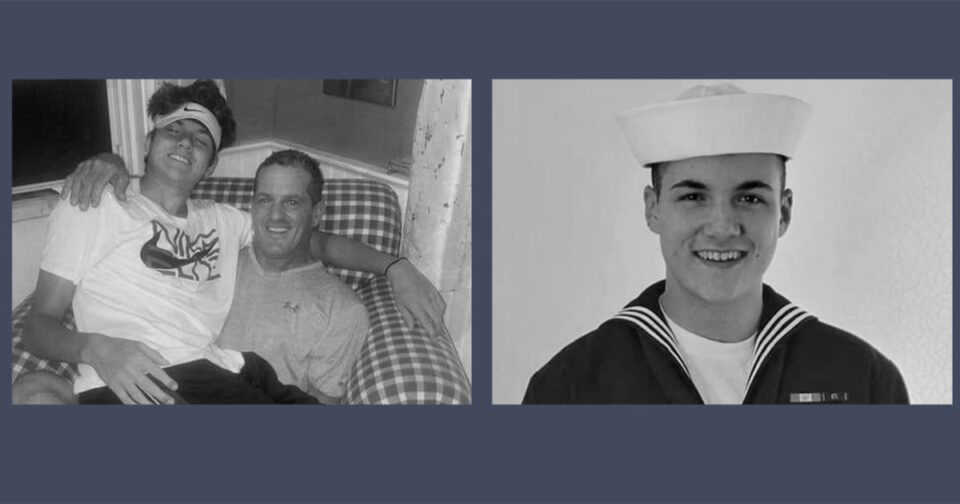 Fresh out of high school, Xavier Hunter Sandor radiated with pride as he enlisted in the Navy on Aug. 24, 2021.

He beamed in his uniform, knowing his grandfather and uncle had also once worn the same dress blues. And he sailed through boot camp, shining brightest as a sharpshooter, his father said.

Then he got his orders. On Jan. 27, he left his family’s home in Shelton, Connecticut, for the first time to serve on the aircraft carrier USS George Washington, as it underwent an extensive overhaul at a Virginia shipyard. He was onboard when he took his life three months later.

Sandor was the third sailor on the ship to die by suicide in the span of a week this April, according to the Navy and the state chief medical examiner’s office. He had just turned 19, said his father, John Sandor. Sandor loved being in the Navy, and as far as his father knew, only the conditions at work were upsetting him.

“He was such a happy, proud person,” the elder Sandor said. “What else could it be?”

Since 2017, the USS George Washington, one of the world’s largest warships, has been docked at the Newport News Shipyard in Virginia, where it’s undergoing a multiyear overhaul. Such an overhaul is done once during a carrier’s 50-year service life, the Navy said, and it includes significant repairs and upgrades, and the refueling of the ship’s two nuclear reactors.

While most of the roughly 2,700 sailors go home after their shifts, hundreds who live out of state or don’t have off-site housing stay on the George Washington. Those onboard endure nearly uninhabitable conditions, including constant construction noise that makes sleeping after long shifts impossible and a lack of hot water and electricity, according to several sailors.

Sandor, a master-at-arms seaman recruit, was one of those who stayed.

When Sandor wasn’t working 12-hour night shifts on the George Washington, he slept and stayed in his car, where he kept a thick blanket and his clothes, according to his father.

“Xavier was alone,” his father said. “There wasn’t much to do there at his age. He’d go to his car and isolate himself.”

During daily phone conversations with his father from his car, Sandor frequently expressed frustration with his living and working conditions.

“He always said it sucked, and I’d always say to ask for help,” John Sandor said. “He’d say, ‘Dad, they don’t give a f—. They don’t care.’ That was always his response to me.”

Every other weekend, Sandor would drive eight hours back to his family’s home and never want to leave when he got there, his father said.

In a statement to NBC News, Lt. Cmdr. Robert Myers, a Navy spokesman, said a “certain number” of sailors have to stay on the ship to run essential equipment, maintain fire and flooding watches, and secure the vessel. The Navy has directed leaders on the ship to identify sailors who could benefit from morale and personal well-being programs, Myers said.

Several current and former George Washington sailors have told NBC News that their struggles were directly related to a culture where seeking help is not met with the necessary resources, as well as the conditions aboard the ship.

John Sandor, 49, said he knew the conditions were “bad” but not to the full extent. It never crossed his mind that his son was considering suicide.

“If I would have known that, I could have changed it somehow,” he said. “That’s going to haunt me for the rest of my life.”

On April 15, Xavier Sandor texted his loved ones goodbye, minutes before his death.

“His mother started screaming. I chased her down the hall,” John Sandor said. “I can’t wrap my head around it. That that’s his only way out is just mind-baffling to me.”

At the time, John Sandor said the Navy had not mentioned anything to his family about the back-to-back suicides of two other shipmates just days before.

John Sandor said he learned of the other suicides through social media posts and news reports. “I’m sick to my stomach,” he said. “I haven’t slept. I don’t eat.”

Since Xavier Sandor’s death, the Navy said it sent a special 13-person psychiatric rapid intervention team to counsel those serving on the George Washington from April 16 to April 19. Sailors on the ship are currently being provided tele-mental health opportunities and expedited appointments for mental health referrals, according to the Navy.

John Sandor said they should have deployed those resources after the first suicide, which he said could have saved his son. He also said junior sailors should not have been put on the boat in those conditions.

“He had such a future ahead of him,” he said, adding that his son was a born leader and athlete, and had been the quarterback of his high school football team.

In a statement, the Navy said, in part, that it was a “resilient force,” but “not immune from the same challenges that affect the nation that we serve.”

In a recent address to the George Washington crew, Master Chief Petty Officer of the Navy Russell Smith, the service’s senior enlisted leader, told crew members that he knew their working conditions during the overhaul were “not pleasant” or easy, and he acknowledged there was a suicide problem.

“Beating suicide is like beating cancer,” he said, according to a transcript of the address, released Monday by the Navy. “There are many different causes, many different reasons.”

In 2020, the most recent year for which full data is available, 580 military members died by suicide, a 16 percent increase from 2019, when 498 died by suicide, according to the Defense Department. Nineteen out of every 100,000 sailors died by suicide in 2020, compared to members of the Army, which had the highest rate, at about 36 per 100,000, Pentagon statistics show.

“Their recommendations will inform potential future action, identify areas for improvements, and propose mitigation strategies to optimize [quality of life],” he said.

When John Sandor thinks about all the memories he will no longer get with his son — a wedding, grandchildren — he breaks down into tears. When he regains his composure, though, he makes a pledge: “There’s going to be a time when my sadness turns to anger,” he said. “I won’t let his death go in vain.”

“Maybe his death can change the Navy,” he added. “If we could keep this from happening to another sailor’s family, that’s what I want to do.”

If you or someone you know is in crisis, call the National Suicide Prevention Lifeline at 800-273-8255, text HOME to 741741 or visit SpeakingOfSuicide.com/resources for additional resources.