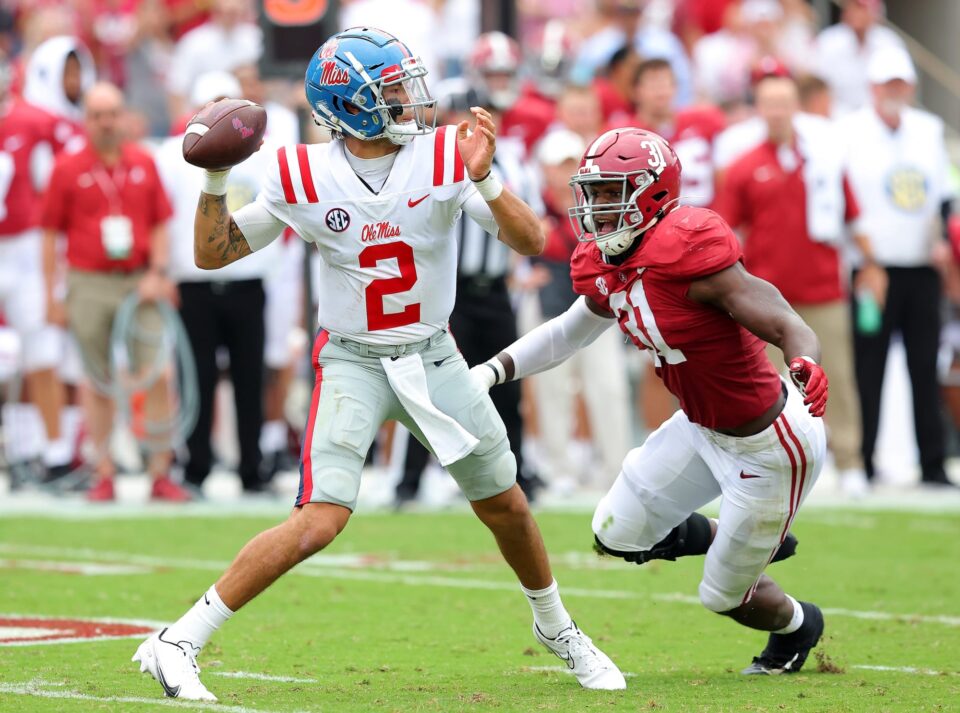 TUSCALOOSA, ALABAMA – OCTOBER 02: Matt Corral #2 of the Mississippi Rebels is pressured by Will Anderson Jr. #31 of the Alabama Crimson Tide during the first half at Bryant-Denny Stadium on October 02, 2021 in Tuscaloosa, Alabama. (Photo by Kevin C. Cox/Getty Images)

Matt Corral is joining the Carolina Panthers as trade talks for Baker Mayfield have apparently stalled between the Panthers and the Cleveland Browns.

Instead of going out of their way to get Baker Mayfield in a trade from the Cleveland Browns, the Carolina Panthers have chosen to go out and get Matt Corral of the Ole Miss Rebels.

Earlier Friday evening, the Panthers were apparently pretty interested in going after Mayfield, despite objections from some.

However, despite that reported interest in the Browns’ quarterback, Carolina made the choice to go out and get Corral, who played pretty well while with the Rebels in Oxford.

The Panthers just went from landing Baker Mayfield to instead trading with the Pats to get back into the 3rd round to draft Matt Corral, all in the span of like seven minutes. #NFLDraft pic.twitter.com/kFohpi30XV

With the 94th overall pick of the 2022 NFL Draft (the 30th pick of the third round), the Panthers picked Corral. So, it seems unlikely that Mayfield will end up with the Panthers unless something truly interesting happens.

2022 NFL Draft: Carolina Panthers pick Matt Corral as trade talks with Cleveland Browns for Baker Mayfield have stalledCorral spent four seasons with Ole Miss from 2018 to 2021 and he saw quite a bit of change in the Rebels over that timeframe. The Rebels went from losing the Egg Bowl in both 2018 and 2019 to hiring Lane Kiffin and subsequently becoming a pretty exciting team to watch. And it should absolutely be noted that Corral was a huge part of Kiffin’s quick success in Oxford.

It’s not entirely clear how good Ole Miss will be next season without Corral as he was a fascinating quarterback to keep up with during the past few seasons. He definitely was a huge reason for the Rebels’ success and it was shocking for many Ole Miss fans to see him fall to the third round.

Can the ed-tech boom last?