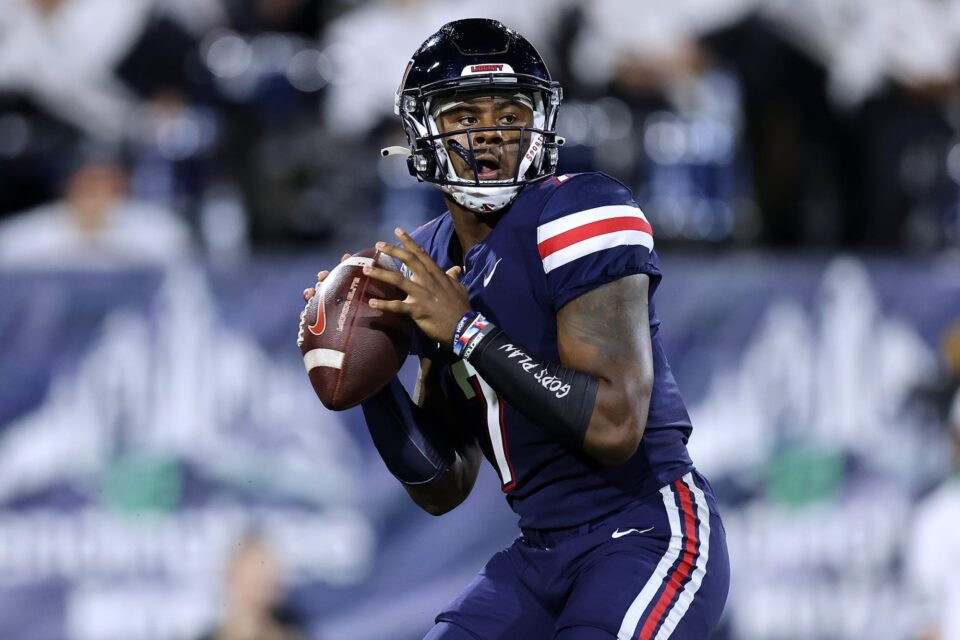 The Tennessee Titans selected Liberty quarterback Malik Willis in the third round of the 2022 NFL Draft, and Twitter celebrated.

Perhaps the most shocking portion of the 2022 NFL Draft was the fact that only one quarterback was selected through the first two rounds. Liberty’s Malik Willis was believed to be a potential first round selection. Yet, his name went unannounced. That all changed following a trade.

The Tennessee Titans pulled off a trade with the Las Vegas Raiders for the No. 86 pick, and they used it to select Willis.

Willis was overcome with emotion once he found out that he will begin his NFL career with the Titans.

Twitter celebrates Malik Willis getting selected by the Titans in NFL DraftWith many wondering why Willis was sliding, they took to Twitter to celebrate that he was finally taken off the board after receiving the call from the Titans.

Malik Willis is going to prove a lot of people wrong, I believe.

A quarterback with Malik Willis’ physical tools has never been available at the draft discount the Titans just received.

What an incredible steal — there is zero downside here.pic.twitter.com/xWcZamyeXI

with malik willis now in tennessee, tannehill can go back to playing wide receiver.

Great landing spot for Malik Willis. He’ll fit right in in that downhill offense. TEN will likely have a small package for him early on to ease him during his development while also putting pressure on Tannehill to perform better.

Malik Willis is well worth a third-round pick and Tennessee is a good spot for him. No pressure to play early. Strong run game.

Really happy for Malik Willis. Zero pressure in Year 1, then he can get the keys to a strong roster in Year 2 if all goes well. That’s a poor man’s 2017 Chiefs situation, but like, in a still-good way.

There you go Malik Willis, glad his wait is over

As for the trade, the Titans sent the No. 90 and 169 picks to the Las Vegas Raiders for the 86th selection to take Willis.

Out of all of the quarterbacks in the 2022 NFL Draft, Willis is viewed as having the highest ceiling, due in part to his arm strength. Not only that, but he has the athleticism to make plays with his legs.

This past season with the Flames, Willis completed 61.1-percent of his passes for 2,857 yards, 27 touchdowns and 12 interceptions. Willis also ran for 878 yards and 13 touchdowns on 197 carries.

Now, Willis heads to Tennessee. He likely will not see much playing time in his rookie year due to the fact that Ryan Tannehill is on the roster. But, he could have the opportunity to become the team’s starter after the 2022 season. Tannehill is under contract.

It may have taken longer than many have expected, but Willis is officially in the NFL as a quarterback for the Titans.

Rossi excited by Miami GP, but says F1 is rival to IndyCar

Number of US Child Hepatitis Cases Rises to 180