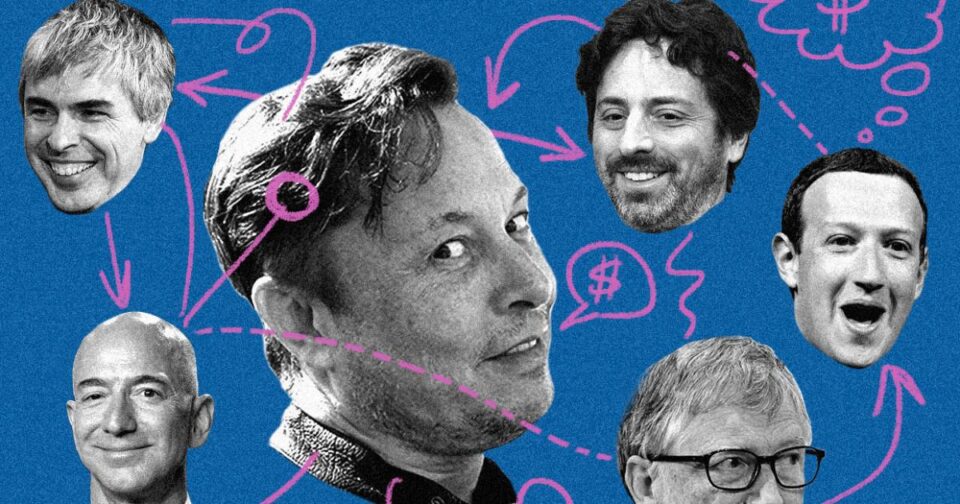 The announcement of Elon Musk’s purchase of Twitter prompted a wave of despair over the future of the already imperfect platform: people planning to leave Twitter, or worrying about the safety of their data, or wondering if Donald Trump will be allowed back. Musk has declared that his interest in the company lies in encouraging free speech, which could loosen even the few existing controls against hate speech and disinformation that Twitter imposes.

But to chalk all the anxiety up to Musk in particular, and to his loose-cannon persona, is to miss the bigger picture. Most of the US’ 10 top billionaires have either made their money through a confluence of tech and media, or purchased such platforms after making their money elsewhere. In fact, if the two holdouts in the top 10 went out and bought media giants tomorrow—if Warren Buffet snapped up Snap and Larry Ellison bought out the New York Times—we’d have a full house.

Michael Bloomberg and Mark Zuckerberg run Bloomberg and Meta, respectively; Sergey Brin and Larry Page co-founded Google and sit on the board of Alphabet; Amazon’s Jeff Bezos owns the Washington Post. Although they are no longer executives there, Bill Gates and Steve Ballmer earned their fortunes through Microsoft, which owns different kinds of social networking and media platforms like LinkedIn and Activision. Musk has merely joined this party—although to be sure, in taking Twitter private, he will be answerable to no one.

Recent regulatory moves, such as the EU’s string of laws and lawsuits, as well as the antitrust campaigns of Lina Khan, the chair of the US Federal Trade Commission, do feel like preliminary actions to size up and curb the influence of some of these companies. But the correlation between personal wealth and the tech-media business has been building for years—and so has recognition of regulators’ inability to keep pace.

Organizations are placing a greater emphasis on trust as a key performance indicator. But what is trust, and how can it be managed? Deloitte research proposes that trust should be seen as a tangible, strategic, and critical asset, given the real, quantifiable value that it can bring to an organization. Learn how trust can be measured.

No matter who Elon Musk decides should helm a newly private Twitter, he’d do well to remember that its bosses don’t last long. The star-crossed social network may be one of the hardest tech companies to run, as evidenced by the high turnover among its chief executives.

What to watch for next

Elon Musk is buying Twitter, but that doesn’t mean he can tweet whatever he wants. On April 27, a federal judge upheld the “Twitter sitter” requirement that Musk agreed to in his settlement with the US Securities and Exchange Commission (and later sued to remove). That means Musk still can’t legally tweet about Tesla’s business without a lawyer’s approval.

🤔  Why do some people never get covid?

⏬  Is GDP selling the US economic recovery short?

🌍   How is Ukraine changing US perceptions of China?

🌆  What exactly is a floating city?

🧠  Is it concentration problems… or is it long covid?

🕵️‍♀️  Criminal minds. Stéphane Bourgoin was one of France’s most prominent experts on serial killers, whose career was inspired by the murder of his girlfriend. Or was it? The New Yorker looks at a group of true-crime fans who dug into Bourgoin’s story. “As soon as we started looking,” one says, “we found more and more inconsistencies.”

💅  Last girlboss standing. Almost a decade after it was founded, beauty startup Glossier is trying to scale without losing its shine—and is still helmed by Teen Vogue intern turned entrepreneur Emily Weiss. Bustle profiles the remarkably resilient founder/CEO, who one former employee describes as having a “magical element.”

💀  What remains. In 2020, 56% of Americans who died were cremated, more than double the 27% of two decades earlier. By 2040, four out of five Americans are expected to choose cremation. The Washington Post looks at this fascinating evolution in how we deal with death, and the financial, demographic, and environmental factors driving it.

😴  How’s your REM cycle? In a quirky history and stinging critique, Real Life takes on sleep wearables: “As we become accustomed to the increasing convergence of sleep and action—and increasingly unaccustomed to experiencing sleep outside frameworks of production and activity—who knows what further reductions, adulterations, and debasements to our repose we might accept?”

Organizations are placing a greater emphasis on trust as a key performance indicator. But what is trust, and how can it be managed? Deloitte research proposes that trust should be seen as a tangible, strategic, and critical asset, given the real, quantifiable value that it can bring to an organization. Learn how trust can be measured.

Thanks for reading! And don’t hesitate to reach out with comments, questions, or topics you want to know more about.

Best wishes for an acquisitive weekend,

Shakur Stevenson frustrates and toys with Oscar Valdez for decision